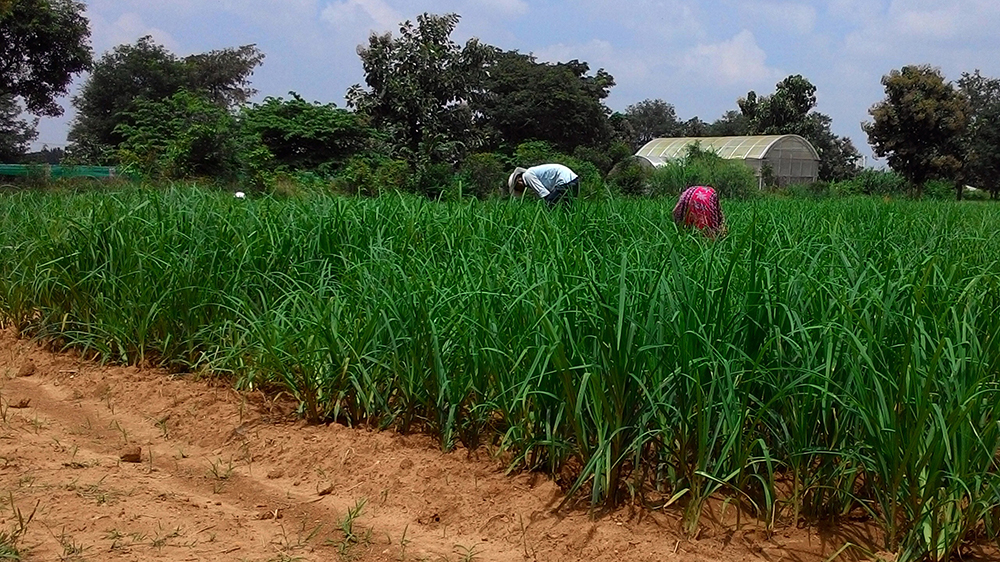 The sequenced finger millet genome is a central basis for improving food security in countries such as India. (Image: Mathi Thumilan Balachadran)

For many poor farmers in India and Africa, finger millet is a major staple food. The crop species is not only a rich source of minerals like calcium, iron, magnesium and zinc, and it contains many vitamins and essential amino acids. The plant is also characterized by its resistance to drought and heat. As it is very healthy and gluten-free, it is finding increased use as a food in industrial countries as well. Despite its importance, finger millet has been given very little scientific attention until now.

Large and complex genome due to fusion of two plant species

Finger millet arose through the hybridization of two different plant species. The plant is therefore polyploid, which means it has a four-fold set of chromosomes and almost twice as many genes as its original species. The size and complexity of the genome are thought to have conferred the broad environmental tolerance of finger millet, while making genome research extremely difficult. For the first time, an international team of researchers from the University of Zurich has now managed to decode the complex genome of finger millet in great detail. It comprises about 2.6 million base pairs and has more than 62,300 genes – about twice as many as rice, for example.

A good 57,900 finger millet genes – over 90 percent – occur in more than two copies. As their DNA sequences are very similar, it was difficult to correctly allocate the numerous, decoded DNA sections within the entire genome. In cooperation with Ralph Schlapbach and Sirisha Aluri from the Functional Genomics Center at the University of Zurich and ETH Zurich, the team headed up by Kentaro Shimizu, professor at the UZH Department of Evolutionary Biology and Environmental Studies, has managed to overcome these difficulties. For this purpose, the scientists combined a sophisticated bioinformatics strategy developed by Masaomi Hatakeyama that uses state-of-the-art sequencing methods with a new technology that can optically map the long, individual DNA molecules in the genome. “Our newly developed strategy will help sequence the genome of other polyploid cultivated plants that have not been able to be determined until now,” Shimizu says.

Improving the supply of nutrients and drought resistance

An interdisciplinary team of researchers from Zurich and Bangalore, India, worked together on this project. The work was supported by Indo-Swiss Collaboration in Biotechnology (ISCB), a bilateral research and development program financed by the Swiss and Indian governments, as well as by the Japan Science and Technology Agency. The objective is to improve food security and to develop the capacity of biotechnological research in India. “The newly available genome data of finger millet opens up numerous possibilities for modern plant breeding,” Shimizu emphasizes. “On the one hand, to help people with mineral deficiencies in India and in industrialized countries and, on the other hand, to make important crop plants more resistant to drought and aridness.”