(jpg, 23 kB) Mastication halters record the movements of the mouth and automatically differentiate between eating and ruminating. (Image: UZH) 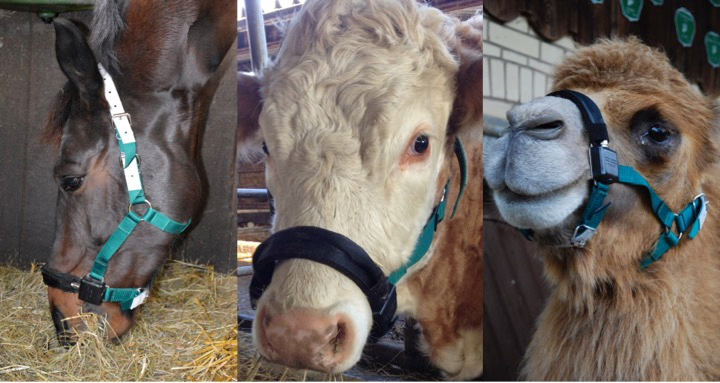 The mastication halters indicate that horses fragment their food with the same rhythmic chewing movements as ruminants do during rumination (Image: UZH).

Herbivores digest their food much better if it has been strongly fragmented by intensive mastication. For ruminants such as cows, sheep, goats, deer, llamas or camels, eating and ruminating are two different processes: Some time after feeding, they regurgitate part of their food and chew it again with particularly even, rhythmic movements. In this way, they achieve the maximum degree of fragmentation of their food.

Researchers of the University of Zurich and the Swiss Federal Institute of Technology Zurich (ETH Zurich) are now investigating whether the chewing movements of the ruminants are similar to those of other ruminants and other herbivores. In their study with horses, cows and camels, they use special mastication halters, which can record the movements of the mouth and automatically differentiate between eating and ruminating.

In the case of cows and camels, the mastication rhythms differ clearly in a predictable manner. The movements during eating were much more irregular than those during rumination, and camels generally have a lower chewing rate during ruminate than cows. The situation is different for horses: “Much to our surprise, the evaluation software determined that horses do not eat, but rather ruminate,” says Marie Dittmann, doctoral student at the University of Zurich and ETH Zurich. “Although horses are not ruminants, they fragment their food with the same rhythmic chewing movements as cows do during rumination.”

For Marcus Clauss, professor at the Clinic for Zoo Animals, Exotic Pets and Wildlife of the University of Zurich, the similarity in the chewing rhythm of such different animal groups is understandable: “Horses do not have a second chance to re-chew something that is hard to digest. For that reason, they have to masticate very thoroughly when eating. That obviously works best with rhythmic and even movements.”

That begs another question: Why do cows chew differently when eating? The researchers have an interesting theory: When grazing in the wild, herbivores also take in dust, dirt or earth, which additionally abrades the teeth while eating. Horses have to put up with this problem. Ruminants, on the other hand, can postpone thorough mastication after the initial eating process until later after the food has been cleaned of such contamination in the rumen. Less tooth abrasion therefore results during eating due to less intensive chewing. “The irregular ingestive mastication of cows could therefore have developed in order to protect the teeth while eating,” Clauss says. Further studies are necessary to confirm this assumption.