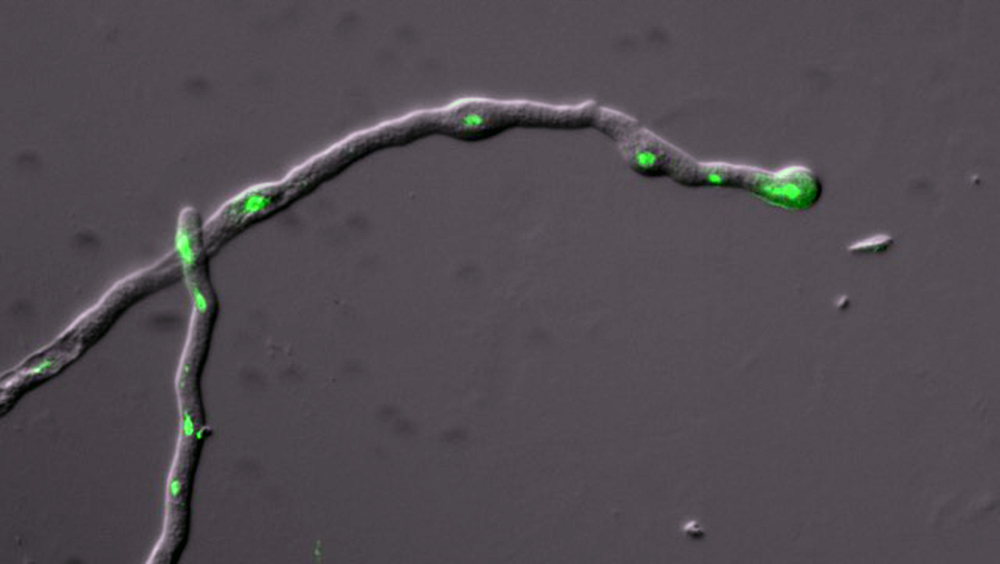 Around 80 to 85 percent of our calorie needs is covered through seeds, either directly as food or indirectly through use as feed. Seeds are the result of plant reproduction. During the flowering period, the male and female tissues interact with each other in a number of ways. When pollen lands on the flower’s stigma, it germinates and forms a pollen tube, which then quickly grows towards the plant’s ovary. Once it finds an ovule, the pollen tube bursts to release sperm cells, which fertilize the ovule and initiate seed formation.

Led by Ueli Grossniklaus, professor at the Department of Plant and Microbial Biology at the University of Zurich, an international research team has now demonstrated how the pollen tube interacts with, and responds to, female plant tissue. The pollen tube does so by secreting extracellular signals (RALF peptides) which it uses to explore its cellular environment and regulate its growth. Two receptors on the cell’s surface enable it to perceive the secreted signals and transmit them to the inside of the cell.

Working together with the teams of Christoph Ringli from UZH and Jorge Muschietti from the University of Buenos Aires, the team around Grossniklaus was able to determine that further proteins had to be active for the pollen tube to recognize the signals – LRX proteins. These proteins were identified at UZH 15 years ago by Beat Keller and his research group, but their function had previously not been clear. LRX proteins are localized in the cell wall surrounding plant cells, where the signals can dock. “We suspect that the pollen tube explores changes in the cell wall by sending out signals and responding accordingly, for example by realigning its growth,” says Ueli Grossniklaus. It is rare for plants to produce and perceive signals with the same cells. The researchers suspect that this allows the pollen tube, which grows extremely quickly, to faster respond to changes in its environment rather than being dependent on signals from other neighboring cells.

The signaling pathways described by the researchers are involved in many other basic processes, and knowledge of how they work opens up numerous possible applications for plant breeding. “By better understanding how these proteins work, we can not only influence pollination and seed formation, but also the development and growth of plants or their defense against pests,” concludes Ueli Grossniklaus.