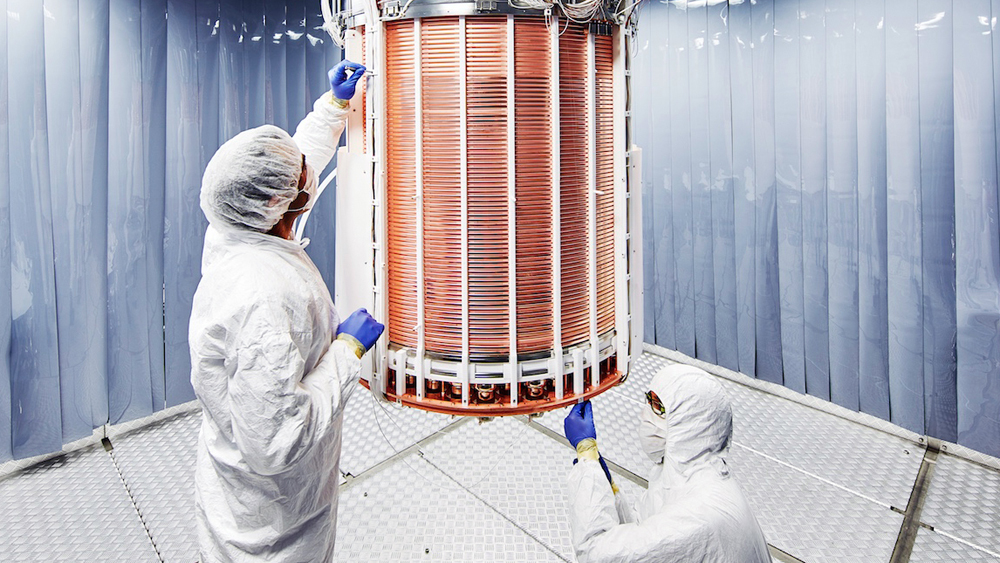 Dark matter is one of the basic constituents of the Universe, five times more abundant than ordinary matter. Several astronomical measurements have corroborated the existence of dark matter, leading to a world-wide effort to observe directly dark matter particle interactions with ordinary matter in extremely sensitive detectors, which would confirm its existence and shed light on its properties. However, these interactions are so feeble that they have escaped direct detection up to this point, forcing scientists to build detectors that are more and more sensitive.

The XENON Collaboration, that with XENON100 led the field for years in the past, is now back on the frontline with XENON1T. The result from a first short 30-day run shows that this detector has a new record low radioactivity level, many orders of magnitude below surrounding material on earth. With a total mass of about about 3200kg, XENON1T is at the same time the largest detector of this type ever built. The combination of significantly increased size with much lower background implies an excellent discovery potential in the years to come.

The XENON Collaboration consists of 135 researchers from the US, Germany, Italy, Switzerland, Portugal, France, the Netherlands, Israel, Sweden and the United Arab Emirates. The latest detector of the XENON family has been in science operation at the Gran Sasso Underground Laboratory (LNGS) since autumn 2016. The only things you see when visiting the underground experimental site now are a gigantic cylindrical metal tank, filled with ultra pure water to shield the detector at his center, and a three-storytall, transparent building crowded with equipment to keep the detector running, with physicists from all over the world.

The XENON1T central detector, a so-called Liquid Xenon Time Projection Chamber (LXeTPC), is not visible. It sits within a cryostat in the middle of the water tank, fully submersed, in order to shield it as much as possible from natural radioactivity in the cavern. The cryostat allows keeping the xenon at a temperature of -95°C without freezing the surrounding water. The mountain above the laboratory further shields the detector, preventing it to be perturbed by cosmic rays. But shielding from the outer world is not enough since all materials on Earth contain tiny traces of natural radioactivity. Thus extreme care was taken to find, select and process the materials making up the detector to achieve the lowest possible radioactive content.

Laura Baudis, professor at the University of Zürich and professor Manfred Lindner from the Max-Planck-Institute for Nuclear Physics in Heidelberg emphasize that this allowed XENON1T to achieve record “silence”, which is necessary to listen with a larger detector much better for the very weak voice of dark matter.

A particle interaction in liquid xenon leads to tiny flashes of light. This is what the XENON scientists are recording and studying to infer the position and the energy of the interacting particle and whether it might be dark matter or not. The spatial information allows to select interactions occurring in the central 1 ton core of the detector. The surrounding xenon further shields the core xenon target from all materials which already have tiny surviving radioactive contaminants.

Despite the shortness of the 30-day science run the sensitivity of XENON1T has already overcome that of any other experiment in the field, probing un-explored dark matter territory. “WIMPs did not show up in this first search with XENON1T, but we also did not expect them so soon!” says Elena Aprile, Professor at Columbia University and spokesperson of the project. “The best news is that the experiment continues to accumulate excellent data which will allow us to test quite soon the WIMP hypothesis in a region of mass and cross-section with normal atoms as never before. A new phase in the race to detect dark matter with ultralow background massive detectors on Earth has just began with XENON1T. We are proud to be at the forefront of the race with this amazing detector, the first of its kind.”