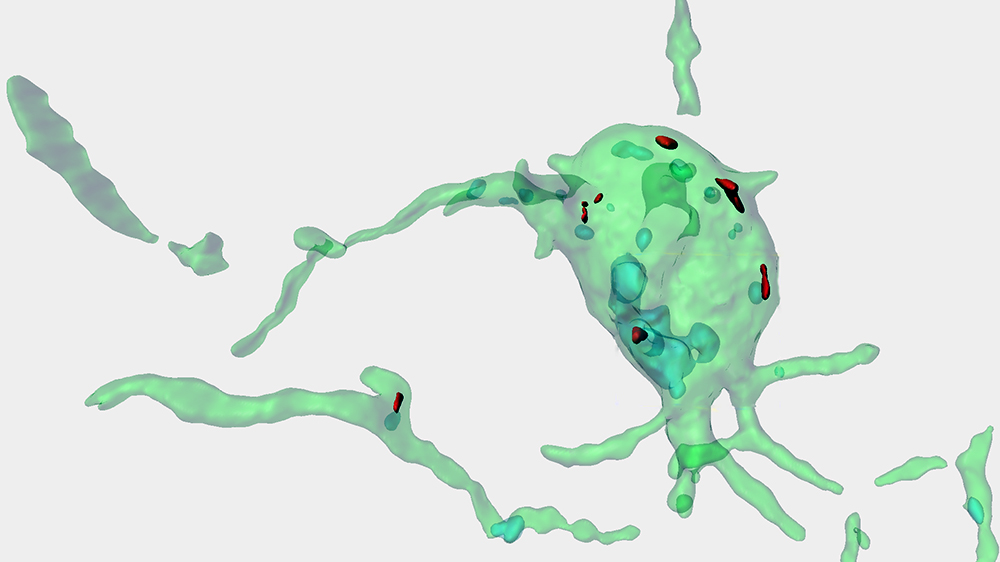 Similar to other neurodegenerative disorders, Alzheimer's is a disease in which the cognitive abilities of afflicted persons continuously worsen. The reason is the increasing loss of synapses, the contact points of the neurons, in the brain. In the case of Alzheimer's, certain protein fragments, the β-amyloid peptides, are suspected of causing the death of neurons. These protein fragments clump together and form the disease's characteristic plaques.

Together with researchers from Great Britain and the United States, the group of Lawrence Rajendran from the Institute for Regenerative Medicine of the University of Zurich now shows that dysfunctional microglia cells contribute to the loss of synapses in Alzheimer's and other neurodegenerative diseases. These scavenger cells usually monitor the function of neurons in the brain by removing excess synapses during development or toxic protein aggregates. Until now, their role in neurodegenerative disorders remains controversial.

In an initial step, the researchers looked at the effect that certain risk genes for Alzheimer's have on the production of the β-amyloid peptide. They found no effect in neurons. This led the researchers then to examine the function of these risk genes in microglia cells – and made a discovery: If they turned off the gene for the TDP-43 protein in these scavenger cells, these cells remove β-amyloid very efficiently. This is due to the fact that the lack of TDP-43 protein in microglia led to an increased scavenging activity, called phagocytosis.

The TDP-43 protein regulates the activity of scavenger cells

In the next step, researchers used mice, which acted as a disease model for Alzheimer's. In this case, as well, they switched off TDP-43 in microglia and observed once more that the cells efficiently eliminated the β-amyloid. Surprisingly, the increased scavenging activity of microglia in mice led also to a significant loss of synapses at the same time. This synapse loss occurred even in mice that do not produce human amyloid. This finding that increased phagocytosis of microglia can induce synapse loss led researchers to hypothesize that perhaps, during aging, dysfunctional microglia could display aberrant phagocytic activity. “Nutrient deprivation or starvation-like mechanism during aging could enhance phagocytic mechanism in microglia and this could lead to synaptic loss" Lawrence Rajendran assumes.

The results show that the role of microglia cells in neurodegenerative diseases like Alzheimer's has been underestimated. It is not limited to influencing the course of the disease through inflammatory reactions and the release of neurotoxic molecules as previously assumed. Instead, this study shows that they can actively induce neurodegeneration. "Dysfunction of the microglia cells may be an important reason why many Alzheimer's medications reduce the amyloid plaques in clinical testing, but the cognitive functions in patients do not lead to improvement," Rajendran says.

This work was supported by the Swiss National Science Foundation, Velux Foundation, Synapsis Foundation, Cure Alzheimer Fund and the Forschungskredit of the University of Zurich.