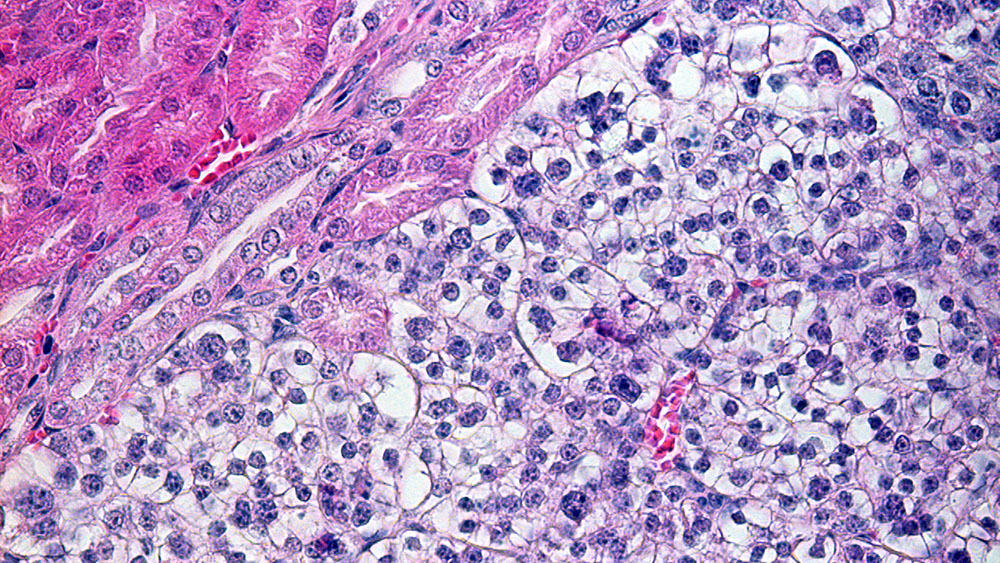 UZH researchers were able to develop a mouse model for kidney cancer for the first time. (Image: UZH)

Roughly 2-3 percent of all people suffering from cancer have kidney cancer. The most common form of this disease is called clear cell renal cell carcinoma (ccRCC). In roughly half of all patients with this disease, the tumor develops metastases and generally cannot be cured.

The research of different types of cancer and the testing of new treatments depends on accurate mouse models. This is because the tumors in mice mirror the genetics as well as the molecular and cellular properties of tumors in humans. Despite decades of effort, however, researchers were unable to develop a mouse model of renal cell carcinoma – until now. Scientists conducting a long-term research project at the University of Zurich were able to develop a mouse model. The study was led by Sabine Harlander and her colleagues at the Institute of Physiology of the University of Zurich in the lab of Professor Ian Frew, who has recently joined the University of Freiburg in Germany. The researchers began by identifying the genes that often mutate in human renal cell carcinomas. They then mutated three of these genes simultaneously in renal cells of mice, which then developed renal cancer.

The progression from gene mutation in the renal cells to the development of a tumor took eight to twelve months. This lengthy period of time, compared to a mouse’s lifetime, indicates that additional factors play a role in tumor development. The researchers therefore decided to take a closer look at the protein-encoding genes in the mouse tumors. They discovered that in all of the tumors at least one of the many genes responsible for the correct functioning of the primary cilium had mutated. The primary cilium is a hair-like structure found on the cell's surface and is responsible for coordinating cell signaling, among other things.

Based on this finding, the researchers found that similar mutations also occur in renal cell carcinomas in humans. The scientists now believe that the loss of normal function in the primary cilium leads to the uncontrollable division of renal epithelial cells, which contributes to the formation of ccRCC. “This research project is a prime example of how mouse models can help us to better understand cancer diseases in human beings,” says Sabine Harlander.

The new mouse model will make it possible to develop better therapies for renal cancer. For example, in the case of patients with renal carcinoma metastasis who are given different medications, some patients respond to the medications, while others do not. The same phenomenon can be observed when mice with renal cancer are treated with the same drugs as the humans. Some tumors shrink, while others do not. Now researchers can investigate the factors that contribute to why certain tumours respond to certain medications and not to others. “We hope that our mouse model, which allows us to combine drug testing and genetic analysis, will provide a deeper understanding of why tumors are sensitive or resistant to drugs,” states Ian Frew. Such vital information could be used to better adjust treatments to the characteristics of each patient.

The mouse model could also contribute to the further development of immunotherapies – a method in which the body’s immune system is stimulated, so that it intensifies its fight against tumor cells. In the last few years, much progress has been made in this field of cancer research, also for the treatment of renal cell carcinomas. Now, thanks to the new mouse model, it will be possible to study how renal tumors are able to develop in an environment with a normal immune system, and how cancer cells manage to evade the immune system’s attacks. Ultimately, the researchers' goal is to use these new findings to improve the effectiveness of immunomodulatory treatments.