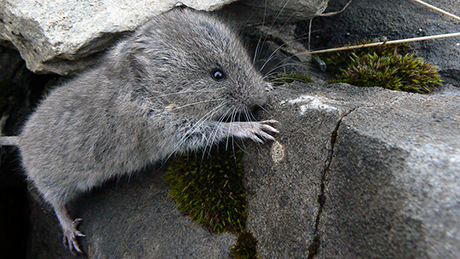 Adaptive evolution, i.e. genetic change via natural selection, plays a central role in how plant and animal populations guarantee their long-term survival. Although this process is well understood in breeding conditions and in the lab, it is still largely unclear how often and how rapidly it takes place under natural conditions. Examples of contemporary adaptive evolution remain extremely rare.

Lighter snow voles are fitter, not larger ones

This is precisely what the team headed by Erik Postma, a research group leader at the Department of Evolutionary Biology and Environmental Studies at UZH, has managed to do. The scientists have been studying a population of snow voles (Chionomys nivalis) in their alpine habitat above Churwalden (Graubünden, Switzerland) at an altitude of around 2,000 meters since 2006. They were able to demonstrate that the voles changed genetically over a few generations only. “But contrary to our expectations, they didn’t get bigger,” says Postma. “Instead, adaptive evolution pushed the voles to become smaller and lighter.”

In principle, larger snow voles are fitter: They have better capabilities to survive and reproduce. Despite this positive correlation at the phenotypic level, however, a converse causal relationship was evident on the genotypic level. “The voles whose genetic make-up led to a lower body weight were the fittest, especially in years when the first winter snow fell earlier than usual,” explains the biologist. This may be because lighter young are more likely to reach their final size before the weather deteriorates and winter comes.

If the scientists had restricted their observations solely to phenotypic traits, such as body size and weight, this rare example of “evolution in action” in the wild would have remained hidden. After all, over the same decade the number of snow voles in the population shrank simultaneously, so more food was available to each animal. In turn, this ecological change compensated for the genetic change and caused the average weight to remain constant. Only by separating the role of genes and the environment were the biologists able to see through this phenotypic “masking”.

Based on DNA samples, they began by reconstructing the genealogy of the vole population and thus how the animals were related. They then used statistical models and quantitative genetics to determine how the genes responsible for body weight changed over time. This approach unveiled an evolutionary pressure in favor of young animals, which reach their maximum body size earlier. “We assume,” adds Postma, “that a climate fluctuation – several consecutive years with early snowfall – is the selection pressure behind this evolutionary adaptation.”

Neither the selective pressure nor the evolutionary response could have been identified with the methods used by the majority of studies that examine how wild populations respond to environmental changes, which predominantly concentrate on changes in the phenotype. In wild populations, the lack of a genetic perspective may provide a flawed understanding of how the causes and consequences of natural selection are connected. As a consequence, the importance of adaptive evolution in plant and animal populations may have been underestimated thus far, especially when it comes to adaptations in response to rapid, anthropogenic, environmental change.