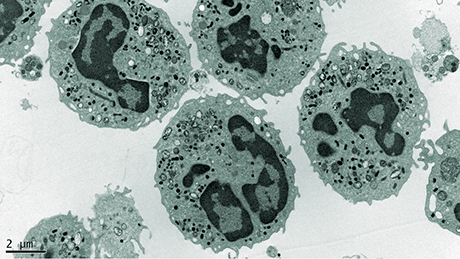 Due to a gene defect, phagocytes of patients with Chronic Granulomatous Disease are unable to kill ingested bacteria and fungi. (Image: ©Dlumen / iStock)

Chronic Granulomatous Disease is a hereditary disease of the immune system. Due to a gene defect, phagocytes of affected patients are unable to kill ingested bacteria and fungi. This results in life-threatening infections and excessive inflammatory reactions that have numerous severe consequences. The disease can be cured by transplanting blood-forming stem cells from the bone marrow of healthy donors. Where no matching stem cell donor is available, gene therapy can be carried out in a few locations worldwide. Before gene therapy is used clinically in patients, efficacy of treatment must be shown in the lab on human cells and cellular models are vital for this.

Recently, a research team headed by Janine Reichenbach, a UZH professor and Co-Head of the Division of Immunology at the University-Children’s Hospital, has developed a new cellular model that enables to test the efficacy of new gene therapies much more efficiently. "We used Crispr/Cas9 technology to change a human cell line so that the blood cells show the genetic change typical of a specific form of Chronic Granulomatous Disease", explains the pediatrician and immunologist. In this way, the modified cells reflect the disease genetically and functionally. Until now, scientists had to rely on using patients' skin cells that they had reprogrammed into stem cells in the lab. This approach is laborious, and it requires a lot of time and money. "With our new testing system, this process is quicker and cheaper, enabling us to develop new gene therapies for affected patients more efficiently", says Janine Reichenbach.

Already about ten years ago, the team of Janine Reichenbach initiated the worldwide first clinically successful gene therapy study for treatment of children with Chronic Granulomatous Disease – headed at that time by UZH's now emeritus Professor Reinhard Seger. The principle was to isolate blood-forming stem cells from the patient's bone marrow, transfer a healthy copy of the diseased gene into these cells in the lab, and infuse the gene-corrected cells back into the blood of the patient. The corrected blood stem cells find their way back to the bone marrow where they engraft and produce healthy immune cells.

To transfer the healthy copy of the gene into diseased cells, until now modified artificial viruses have been used as transport vehicle for the correcting genes. Besides curing the primary disease, former gene therapies using viral gene correction systems that now are outdated resulted in the development of malignant cancer cells in some patients in European studies. Janine Reichenbach's team currently works with a new improved ‘gene ferry’. "Today, we dispose of so-called lentiviral self-inactivating gene therapy systems that are efficient and, above all, work more safely". The University-Children’s Hospital Zurich is one of three European centers able to use this new gene therapy in an international clinical phase I/II study to treat patients with Chronic Granulomatous Disease (EU-FP7 program NET4CGD).

For Janine Reichenbach's team, such new gene ferries are only an intermediate step. In future, gene defects shall no longer be treated by adding a functioning gene using viral ‘gene ferries’, but instead are repaired with pinpoint precision using genome editing. Crispr/Cas9 is key here too. However, it will need about another five to six years until this ‘precision gene surgery’ is ready for clinical applications. Janine Reichenbach appears optimistic. "Within the framework of University Medicine Zurich, we have the technical, scientific and medical know-how on site to develop new therapies for patients with severe hereditary diseases faster and establish UZH as an international competence center for gene and cell therapies in the future."