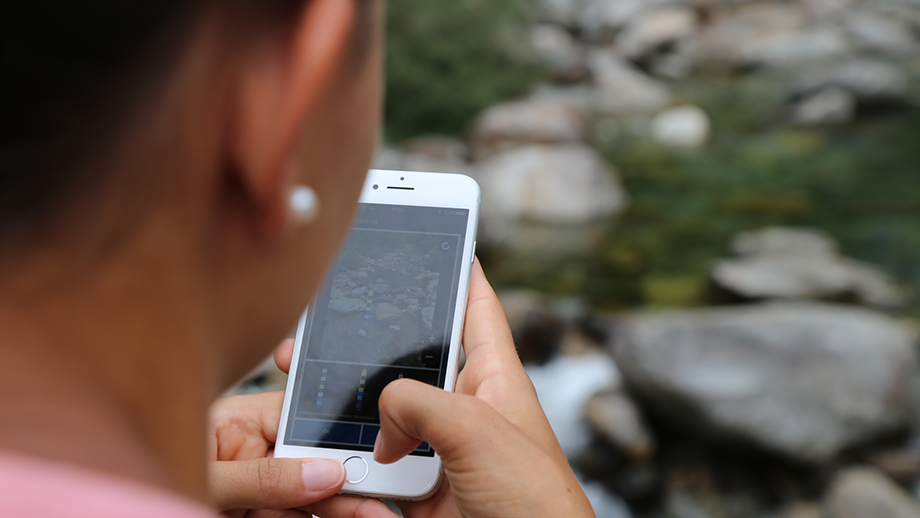 CrowdWater-App in use
The CrowdWater app in use: A reference image of the water level at a specific river can be created with a virtual gauge. (Image: Rolf Klossner)

The CrowdWater project, developed by doctoral candidates from the Department of Geography of the University of Zurich, is a citizen science project in the area of hydrology, the science of water. The project collects hydrological data on water levels, streamflows and soil moisture from all over the world. The smartphone app CrowdWater | SPOTTERON, which is available for free, makes it possible for anyone interested in water to use their own observations and simple graphical methods to take hydrological measurements and add these to a central database. “For CrowdWater to work, we need the public to participate,” says UZH doctoral candidate Simon Etter.

In many regions of the world where infrastructure to collect water data is lacking, the data captured through CrowdWater can be analyzed using hydrological models. These models help to predict floods and improve water management. “The CrowdWater app allows the local population to gather data on rivers near them in a spatiotemporal resolution that is beyond the limits of official measurement networks,” explains Barbara Strobl. The doctoral candidate adds that at the same time, those participating to improve the data for their area also learn something about their local streams.

The researchers have yet to find out whether this crowdsourcing approach to collect data through an app will work. Switzerland is the ideal place to test the app because the data from the measurement stations can be used as a benchmark. Interesting rivers for this first phase include, for example, the Töss or the Murg in north-eastern Switzerland, the Gürbe in the canton of Bern, or the Verzasca in Ticino (see map). While it is generally useful to collect data throughout the year, it is especially fascinating to observe local rivers and streams in spring, because this is often when water levels are high as a result of snowmelt in the Alps. It is also interesting for participating citizen scientists to compare water levels before and after a rainfall event. However, Switzerland is more than just a testing ground: “In spite of the good network of measurement stations, we too don’t have enough local measurements for most rivers. We’re optimistic that the collected data will also lead to better models and forecasts in Switzerland,” says professor of hydrology Jan Seibert, who leads the project.

The methods with which data are collected are very simple: At the heart of the app is a virtual staff gauge that makes it possible for everyone to create a reference image of the water levels of a specific river. Other users also see these virtual stations on the app’s map and can find their location through their phone's GPS. They then compare the real situation of the river with the reference image in the app. Anyone can create a new virtual station or add data to existing stations.

Stations that have many observations and long time series are particularly useful for the researchers. “If a section of a river already has a CrowdWater station, then it makes more sense to add more observations to the existing station than to create a new one,” says Jan Seibert. In addition to water level data for rivers, the app also makes it possible to make observations on soil moisture and on small streams that only flow occasionally.