(jpg, 938 kB) They also use physical signals such as caresses or slaps to express their social bonds. (Image: Simon Allen, Dolphin Innovation Project) 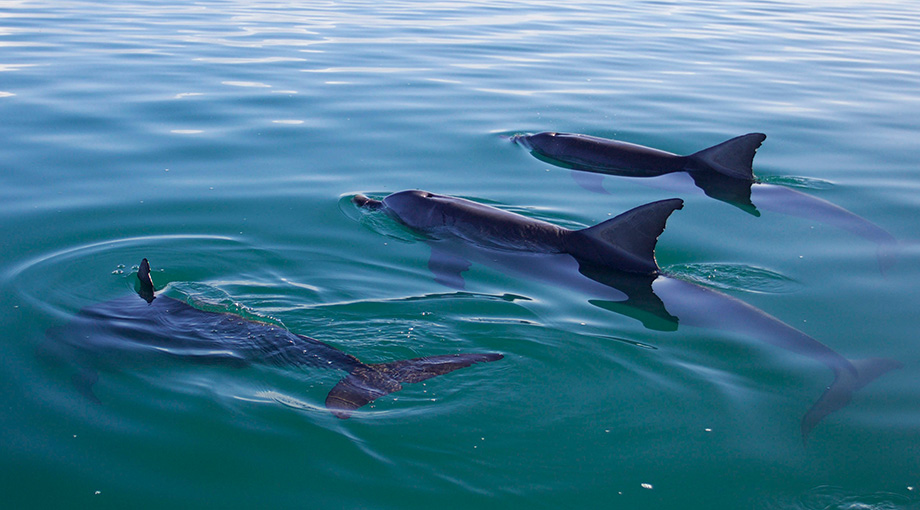 The fact that the individual “names” are kept helps males to keep track of their different relationships. (Simon Allen, Dolphin Innovation Project)

Dolphins are intelligent creatures that communicate with high-frequency whistles and are capable of forming strong relationships. Within their population, male dolphins enter into complex, multi-level alliances ranging from intense, lifelong friendships to loose groups. For example, during the mating season two or three males will join forces to separate a female from the group, mate with her, and fend off rivals, or even “steal” females from other groups.

Scientists at UZH, the University of Western Australia and the University of Massachusetts studied 17 adult bottlenose dolphins in Shark Bay in Western Australia. The existence of complex, multi-level alliances among males was already known from previous research on this population. Their mutual bonds are as strong as those between mothers and their calves. Earlier research had also shown that dolphins use high-frequency whistles as a kind of “name” to introduce themselves and also to be able to identify each other, even over long distances under water

For the present study, the researchers used underwater microphones to make recordings of the dolphins’ whistles, and were able to identify each male’s individual voice label. They measured the similarity of these identifying signals, both within their immediate alliance and within another network in their community. They discovered that male dolphins, despite their strong social bonds, retain their individual whistles to identify their partners and competitors, and that these do not become adapted to each other over time.

Every male dolphin retains his own call for life

“This is a very unusual finding,” says Michael Krützen, professor of anthropology and evolutionary biology at the University of Zurich. It is common for pairs or groups of animals to converge on a similar call to build and maintain their strong bonds. It occurs, for example, among certain species of parrot, bats, elephants and primates. “With male bottlenose dolphins, precisely the opposite happens: Each male keeps his own, individual call, and distinguishes himself from his allies, even when they develop an incredibly strong bond,” explains Krützen.

The fact that the individual “names” are kept helps males to keep track of their many different relationships and distinguish between friends, friends of friends, and rivals. This way they’re able to negotiate a complex social network of cooperative relationships. “Besides humans, so far only dolphins appear to retain their individual ‘names’ when it comes to forming close, long-lasting, cooperative relationships,” states Stephanie King, lead author of the study.

Male dolphins also use physical signals such as caresses, slaps and synchronized behavior to express their social bonds. “At the moment we’re looking more closely into the relationships among the males in an alliance to find out whether or not they’re equally strong between all the individuals involved,” explains Krützen.