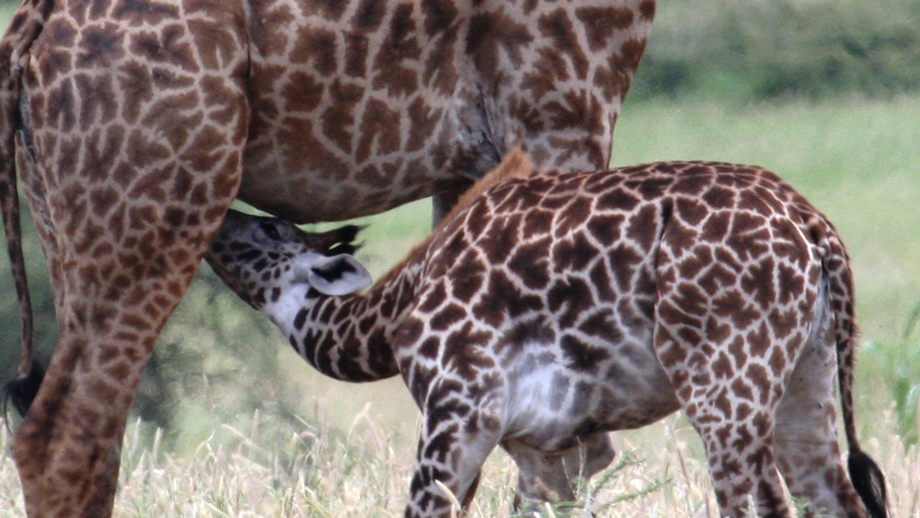 Giraffe spot patterns are complex and can be quite different from one animal to another. “Complex markings can help animals evade predators, regulate their temperature, or recognize family or individuals. All of this can affect their ability to survive and reproduce,” says Monica Bond, doctoral candidate in evolutionary biology and environmental studies at the University of Zurich and lead author of the study.

Together with Derek E. Lee from Penn State University, she analyzed survival records and photos of spots of Masai giraffes. Giraffes have a uniformly dark grey skin color, but their spots are highly variable in color and shape, ranging from nearly round with very smooth edges to elliptic with jagged or lobed edges. Spot patterns do not change as an animal ages, which allows researchers to identify individuals based on their unique patterns. The researchers found that two of 11 spot traits measured were significantly similar in the mother animals and their calves: Circularity, i.e. how close the spot is to a perfect circle, and solidity, which refers to how smooth and complete the edges are.

The study also found that newborn giraffes with larger and irregularly shaped spots had a better chance of surviving the first few months of life. This increased survival rate likely indicates that these young animals have better camouflage, but it could also be related to other survival-enhancing factors, such as temperature regulation or visual communication. “We were able to show that spot patterns affect the survival of young animals and that they’re inherited – passed from a mother to its calf,” says Bond.

Study of animals in the wild

Anne Innis Dagg, the first giraffe field researcher in Africa, presented evidence in 1968 that the shape, number, area, and color of spots in giraffe coat patterns may be heritable. “But her analysis was based on a small population of zoo animals,” says Monica Bond. “We studied giraffes in the wild and used modern imaging and analysis techniques to confirm her conclusions.”

The study also highlights how modern imaging software and statistical methods can be used to reliably analyze complex coat patterns. “I hope that other scientists will use the same tools to measure mammal coat patterns to advance our understanding of what these patterns mean,” says Lee. “Quantifying heritability and fitness consequences of variation in coat patterns could help us understand how and why complex coat patterns evolve in wild animals.”