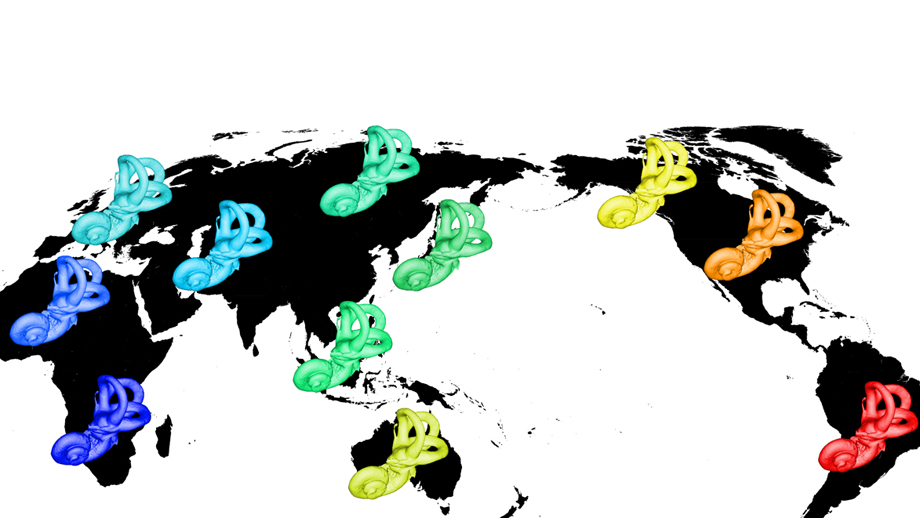 The early migration of humans out of Africa and across the world can be proven using genetic and morphological analyses. However, morphological data from the skull and skeleton often only allow limited conclusions to be drawn about the geographical dispersal pattern, especially because of the many ways in which the human skeleton adapts to local environmental conditions. Now, an international team of researchers led by paleoanthropologists from the University of Zurich has shown that the morphology of the inner ear is a good indicator for population history and human dispersal.

Differences within a population greater than between populations

The hearing and balance system in humans, as in all vertebrates, is housed in a cavity system in the base of the skull – the bony labyrinth of the inner ear. The researchers analyzed the labyrinth structures in human populations from southern and northern Africa, Europe, Asia, Australia, and America, including as far south as Patagonia, using computed tomography to obtain high-resolution 3-D data of the bony labyrinth.

The data showed that the shape of the labyrinth varied greatly, with the variation within a population being considerably greater that the variation between populations. “This typically human variation pattern is also known from comparative genetic data. It shows that all humans are very closely related and have their roots in Africa,” explains UZH anthropologist Marcia Ponce de León.

Morphology of the labyrinth correlates with dispersal distance from Africa

Conclusions about inner-continental dispersal history can be drawn

Incidental genetic changes do not have functional effect

The new results are surprising because it was previously assumed that the shape of the labyrinth was mainly determined by its function. It has now been shown that despite the very high functional requirements for balance and hearing, nature tolerates an astonishingly wide variation in the labyrinth structure. “This is probably due to random changes in the genetic material. Such changes may have few or no functional consequences, but the associated structural changes provide a record of human dispersal and evolution history,” summarizes the paper’s last author Christoph Zollikofer, professor of anthropology at UZH.

Computed tomography data should be acquired before DNA extraction

The compact bone that surrounds the labyrinth is also interesting for paleogenetics as it contains a large amount of DNA. This gives rise to an acute conflict of interests: While computed tomographic investigations are non-invasive, the process of DNA collection damages the labyrinth. “Paleogenetics is a rapidly growing research field and hundreds of labyrinths from archaeological skeleton collections have already been milled to dust without first being documented,” says Christoph Zollikofer. The research team therefore wants to ensure that computed tomographic data is routinely obtained before bones are released for DNA extraction. “These data form an invaluable archive of the history of fossil hominid and modern human populations,” concludes Marcia Ponce de León.