(jpg, 1.22 MB) 4i is the first imaging technique which gives a multiplexed tissue-to-organelle view of biological samples and links multiplexed information in one and the same experiment. (Image: UZH) 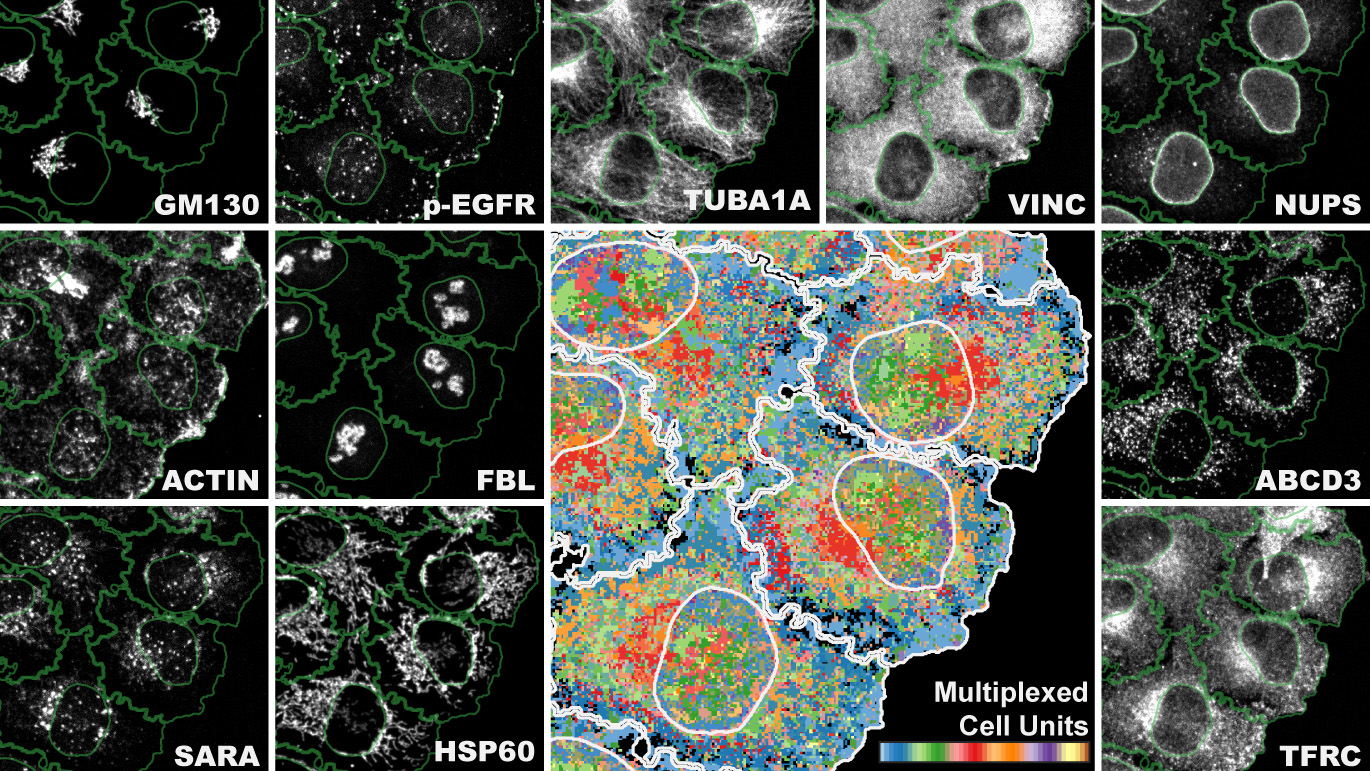 4i is the first imaging technique which gives a multiplexed tissue-to-organelle view of biological samples and links multiplexed information in one and the same experiment. (Image: UZH/Science)

Researchers at the University of Zurich have developed a novel method for analyzing cells and their components called Iterative Indirect Immunofluorescence Imaging (4i). This innovation greatly refines the standard immunofluorescence imaging technique used in biomedicine and provides clinicians with an enormous amount of data from each individual sample. 4i makes it possible to observe the spatial distribution of at least 40 proteins and their modifications in the same cell for hundreds of thousands of cells simultaneously at various levels, from the tissue down to the organelle level.

Ten times more proteins visualized at the same time
“4i is the first imaging technique which gives us a multiplexed tissue-to-organelle view of biological samples. We can, for the first time, link multiplexed information derived at the tissue, cellular and subcellular level in one and the same experiment,” says Gabriele Gut, lead author of the study and postdoctoral researcher at the Institute of Molecular Life Sciences at UZH.

Immunofluorescence (IF) uses antibodies to visualize and locate proteins in biological samples. While the standard IF method usually marks three proteins, 4i uses off-the-shelf antibodies and conventional fluorescence microscopes to visualize ten times more proteins by iterative hybridization and removal of antibodies from the sample. “Imagine cell biologists to be journalists.  Every experiment is an interview with our cells. With conventional IF I can ask three questions, whereas with 4i I can have a discussion on more than 40 topics,” explains Gabriele Gut.

Map provides systematic survey of cellular landscape
Once acquired, the huge amount of data must then also be able to be analyzed – the next hurdle for the researchers. “We generated images with subcellular resolution for thousands of cells for 40 channels for more than 10 treatment conditions. The human eye and brain cannot process the biological complexity collected by 4i”.

To make full use of the 4i data, Gabriele Gut developed a new computer program for visualization and analysis called Multiplexed Protein Maps. It extracts the multiplexed fluorescence signal for millions of pixels and generates an abstract but representative map of the multiplexed protein distribution in cells.

The researchers were thus able to generate a systematic survey of the cellular landscape: They managed to visualize the spatial intracellular organization of most mammalian organelles along the cell cycle and in different microenvironments.

The new Iterative Indirect Immunofluorescence Imaging (4i) analysis method can also be used to determine the effects of pharmacological substances on the organization and physiology of cells. It is currently being used in a translational research collaboration with clinicians and a pharmaceutical company with the aim of improving treatment outcome of cancer patients. Lucas Pelkmans, professor at the Institute of Molecular Life Sciences at UZH, and his research team aim to characterize tumor cells of patients who have been treated with different cancer medications.

The scientists hope that the lab results will provide information to support clinical decision-making for the individual treatment of patients. Moreover, the researchers plan to implement 4i and multiplexed protein maps on tissue sections of tumors to identify relevant biomarkers and thus improve diagnoses and prognoses for cancer patients.