(JPG, 2.53 MB) The cells that produce the sex hormone were isolated from a horse embryo – the starting point for producing the hormone using cell cultures. (Image: Jane Beil-Wagner, UZH) 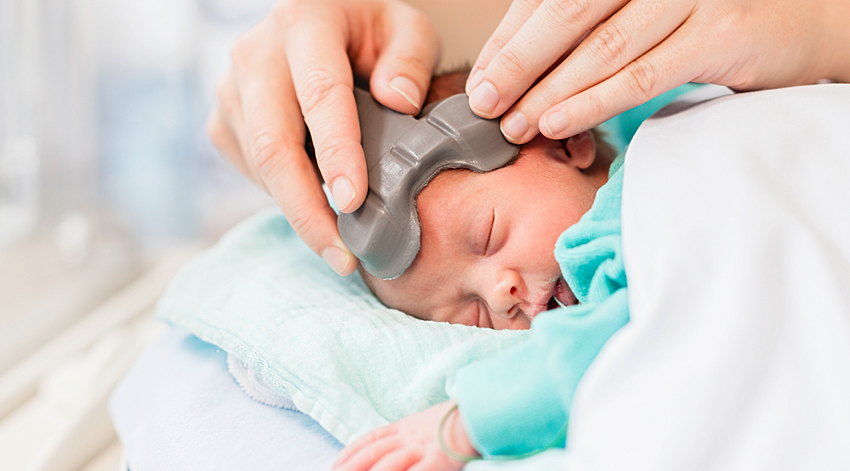 The new “oximeter” is able to make high-precision measurements of oxygen levels in body tissue of premature babies. (Image: Department of Neonatology, USZ)

New discoveries and innovative technologies are part and parcel of cutting-edge research. And yet, the findings generate relatively few commercially successful products and services. Since the University of Zurich believes outstanding scholarship should serve the whole of society – that research isn’t an end in itself – it supports junior researchers in translating their findings and ideas into economically viable applications. This commitment is well worth the effort: UZH has over 300 active patents, and over 100 spin-off companies were founded based on findings made at the University.

The University’s diverse support structures for innovative projects are particularly evident in the life sciences, where junior scholars can attend courses and training programs focused on founding a company and creating a business, and where they can develop contacts with representatives from the industrial sector as well as gain access to state-of-the-art research infrastructure, coaching sessions – and money. The BioEntrepreneur Fellowships are the University’s latest funding instrument: Over a period of 18 months, PhD candidates and postdocs from the fields of medicine and biotechnology receive 150,000 Swiss francs to pursue their business concepts. “We provide young talent with the equipment they need to embark on their spin-off projects as efficiently – and successfully – as possible,” Michael Schaepman, Vice President for Veterinary Medicine and Science, said at UZH’s annual media conference.

Jane Beil-Wagner, a postdoc at the Institute of Laboratory Animal Sciences, is one of the four fellowship recipients in the program that began in 2017. Her business concept is all about horses – or rather: About the hormone gonadotropin, which is harvested from horses and commonly used in breeding livestock such as pigs. Gonadotropin is extracted from the blood of pregnant mares in so-called “blood farms” in South America, where the animals are frequently kept under unethical conditions. Beil-Wagner and her team aim to improve the situation by using cell cultures to produce the hormone in a lab.

Accurate measurements of oxygen in the brains of premature babies

“OxyPrem” is the name of the second project being developed for the market. Engineer Stefan Kleiser is working with a physicist and a business expert to further develop an “oximeter” able to make high-precision measurements of oxygen levels in body tissue – an especially important factor in gauging the oxygen supply in the brains of premature babies. When OxyPrem registers an undersupply of oxygen, medical staff can react immediately to prevent acute brain damage and the ensuing long-term consequences for the young patients. The light-based device is currently being tested in a clinical study in preterm babies at USZ; it is expected to be ready for medical practice in the near future.

Headway thanks to the Werner Siemens Foundation

The new funding instrument for innovative projects has also sparked the interest of a major private foundation: Over the next 10 years, the Werner Siemens Foundation is donating approx. 10.7 million Swiss francs to further develop the UZH fellowship program in the area of medical technology. The funds allocated to the program MedTechEntrepreneur Fellowships are dedicated to financing grants as well as to equipping the lab at the University’s Schlieren Campus. “With funding partnerships like this, we can expand existing areas of specialization while also developing new fields of research or setting new research priorities,” says UZH President Michael Hengartner. In 2017, the UZH Foundation received donations worth a total of 27.5 million Swiss francs.

The total income of 1.38 billion Swiss francs is 19 million francs, or 1.4 percent, higher than in the previous year. This development is due mainly to significant increases in funds from third-parties, especially the Swiss National Science Foundation and the EU and, to a lesser degree, due to slightly higher levels of basic funding from the government. “The 301 million Swiss francs received from third-parties once again reflects a very positive development,” says Stefan Schnyder, Director of Finances and Human Resources.

In the fall semester of 2017, 25,672 students were enrolled at the University, meaning the number of students at UZH remained constant compared to the previous year (25,542). At the same time, the STEM subjects and human medicine continue to register a marked increase in student numbers, with 4,967 students enrolled in the former and 3,490 students in the latter. The developments in the field of biomedicine are particularly useful to illustrate the high demand for innovative new degree programs.