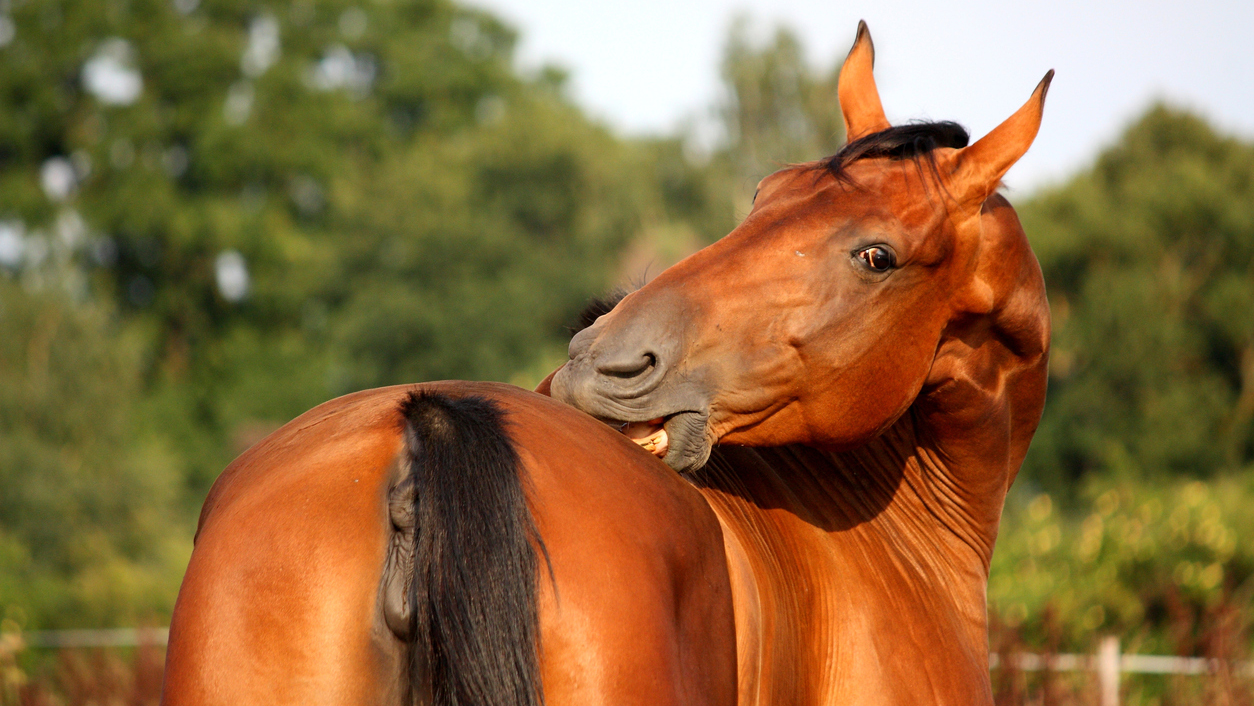 Allergic skin reactions caused by insect bites are the most common type of allergies in horses. (Image: iStock.com/virgonira)

Prof. Martin F. Bachmann has been working for many years on the development of therapeutic vaccines with notable successes that include a vaccine against hypertension (Lancet. 2008 Mar 8;371(9615):821-7) and CAD106, a vaccine against Alzheimer`s disease that is now in registration studies with Novartis. The new enhanced vaccine platform has been engineered to incorporate a universal T-cell epitope for adaptive immune activation, a stimulator of innate immunity, and repetitive antigen presentation in a nanoparticle. Thus the vaccine platform is optimized for elderly and immuno-compromised individuals leading to induction of strong immunity and a high responder rate. This cutting–edge technology enables the latest advances in biologic medicines to be translated for use in companion animals at affordable prices - an option that will likely change the way we will medically treat our furry partners.

The clinical potential of these vaccine candidates for use in veterinary medicine is now highlighted by two articles published back to back on the 4th of April 2018 in The Journal of Allergy and Clinical Immunology (JACI), the most-cited journal in the field of allergy and clinical immunology. The team of scientists developed breakthrough therapies for insect-bite hypersensitivity in horses and atopic dermatitis in dogs by displaying either equine IL-5 or canine IL-31 on the immunologically optimized virus-like particles (NPJ Vaccines. 2017 Oct 23;2:30.). Thus, the researchers were able to generate vaccines that induced clinically effective levels of neutralizing target specific anti-cytokine antibodies, which resulted in dramatically improved disease symptoms in immunized animals. This has previously only been achieved by passive immunization with high amounts of monoclonal antibodies.

These vaccines are now being developed as first-in-class break-though-medicines for treating chronic allergic diseases in the respective target species.

Allergic skin reactions caused by insect bites are the most common type of allergies in horses. One important form of such a skin allergy is called sweet itch, summer eczema or insect-bite hypersensitivity (IBH), and manifests in weeping and bleeding lesions including crust formation, scales, swelling and lichenification of the skin.

Thirty-four sweet itch affected Icelandic horses participated in a placebo-controlled double blinded clinical study performed by Fettelschoss-Gabriel et al., whereof 19 horses received vaccine and 15 horses received placebo. The vaccine consisted of two components coupled together. The first component is a general immune activation part based on the above mentioned enhanced virus like nanoparticle, the second component is IL-5, a self-molecule. IL-5 is a cytokine and the master-regulator of eosinophil development and activation, a major effector cell type in allergy. Immunization with this conjugate vaccine was well tolerated and resulted in IL-5 specific auto-antibodies which neutralized its target. This limited the number of eosinophils localized to the skin and thereby reducing tissue damage. This resulted in strongly reduced skin lesion scores in vaccinated compared to the previous season as well as placebo.

Unlike done in classical desensitisation, where one tries to make the immune system tolerant to the allergens, Fettelschoss-Gabriel et al. targeted the key effector cell in insect bite hypersensitivity,  the eosinophil. This cell type also plays a key role in allergic human asthma and moncolonal antibodies against IL-5 have recently become an important new weapon for the treatment of the human disease. The new insights gained in horses may help to develop a similar new medicine in humans.

Vaccine against Atopic Dermatitis in Dogs

Atopic dermatitis (AD) is the most common allergic skin disease in dogs. Extensive itching causes scratching which results in loss of fur and secondary infections of the skin, accelerating the symptoms. AD not only affects the well being of dogs but also impacts the quality of life of their owners. IL-31 is a key cytokine driving itching, and a monoclonal antibody against IL-31 has been licensed for use in dogs for the treatment of AD. The teams of Prof. Martin Bachmann and Prof. Claude Favrot describe the development of a virus-like particle based vaccine against canine IL-31, and demonstrate that immunized dogs mount a robust IgG response which essentially abrogates symptoms of itching in house-dust mite sensitized and challenged dogs. Hence, Bachmann et al. present a breakthrough therapy of vaccination against IL-31, which is not only a promising mode to treat AD in dogs but may also facilitate development of a similar vaccine in humans.