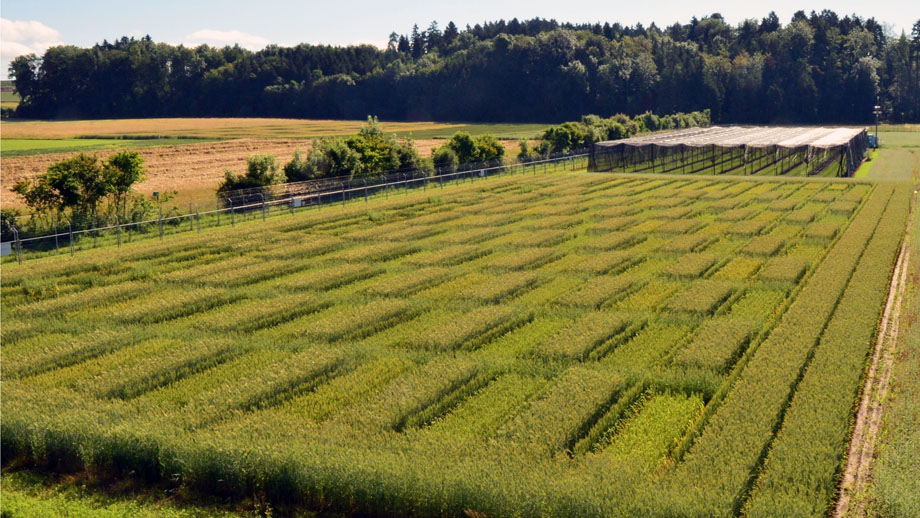 A decent wheat harvest requires robust wheat. However, wheat crops are often infected by fungal diseases such as powdery mildew. For several years now, UZH researchers have been investigating a wheat gene that confers resistance to powdery mildew (Blumeria graminis f. sp. tritici). The gene, called the Pm3 resistance gene, exists in different variations, so called alleles. In previous studies, plant researcher Beat Keller and his team demonstrated that single Pm3 alleles are able to confer resistance against powdery mildew fungi. And yet, a single resistance gene can quickly lose its effectiveness. Thus when it comes to plant breeding, it is important to combine multiple resistance genes. This is exactly what researchers at UZH have now tested in field trials using transgenic wheat lines.

No negative effects on wheat yield

Back in the laboratory, the scientists proved that the parental lines’ gene activity is added up in the newly created lines. Each Pm3 allele in the four new lines displayed the same activity as in the parental line, which results in increased overall activity, since it came from two different gene variations. “The improved resistance against powdery mildew is the result of the increased total transgene activity as well as the combination of the two Pm3 gene variations,” summarizes Teresa Koller. The high overall activity of resistance genes did not cause any negative effects for the development of the wheat or its yield.

The findings of these trials improve our general knowledge of the immune system of plants, and in particular of fungal disease resistance of wheat. Besides contributing to fundamental research in the area of plants’ immune systems, the findings can also be applied in wheat breeding. Thanks to the precise testing of Pm3 alleles, the best variations and combinations are identified and can then be used directly in traditional breeding by crossbreeding them into modern wheat varieties.

Function of the Pm3 resistance gene

The Pm3 gene is the “blueprint” for a protein that can receive signals in the plant cell, i.e. a receptor. It is able to recognize avirulent proteins, or AvrPm3 for short, of the powdery mildew fungus. The receptor triggers the plant cell’s death as soon as the harmful fungus attempts to inject the AvrPm3 protein into the plant cell. By killing off the attacked cell, the rest of the plant is protected against the fungus. Different Pm3 gene variations, or Pm3 alleles, encode different variations of the receptor. These receptor variations are able to recognize different AvrPm3 proteins of the powdery mildew fungus.

Prof. Beat Keller and his team have identified various Pm3 gene variations in powdery mildew-resistant wheat varieties from across the world. To assess the function and effectiveness of the different Pm3 gene variations, they were genetically engineered into the genome of the spring wheat variety Bobwhite. Bobwhite wheat lacks its own functioning Pm3 gene and is very susceptible to powdery mildew. The transgenic Bobwhite wheat lines, each containing a single Pm3 gene variation, were assessed in field trials as part of the National Research Program NFP59 between 2008 and 2010. The findings of these trials were published in 2011 and 2012.