(jpg, 1.08 MB) Structure of a volume-regulated chloride channel: The protein, which consists of six subunits, is shown as a ribbon. The position of the membrane is indicated by lines. The selectivity filter is depicted as inset (right). The positions of positively charged amino acids are indicated with (+). (Image: Raimund Dutzler, UZH) 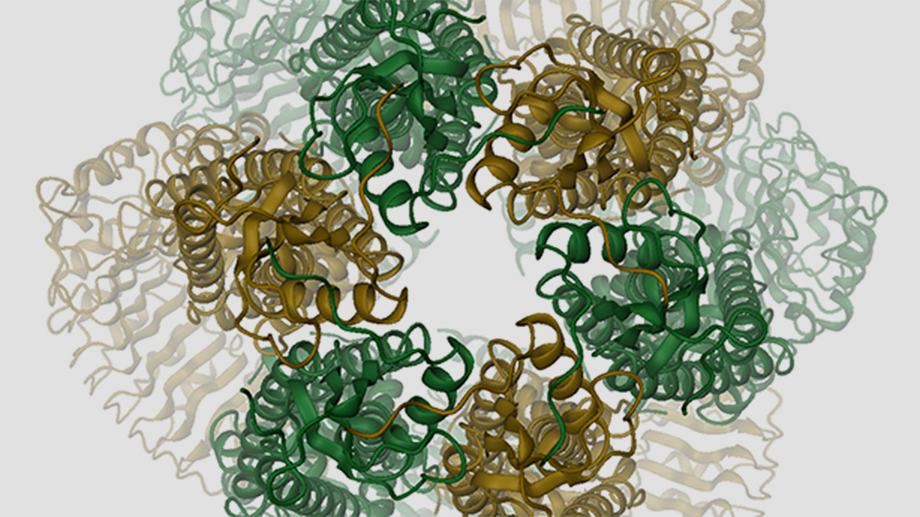 Computer-generated representation of the chloride channel
Structure of a volume-regulated chloride channel: the view from above shows the selectivity filter. (Image: Raimund Dutzler, UZH).

Human cells are enclosed by membranes and are in osmotic equilibrium with their environment. If the concentration of solute molecules (osmolarity) in the fluid surrounding the cells decreases, cells start to swell; in extreme cases, this can result in the cells bursting. To avoid this, cells activate volume-regulated chloride channels (VRACs) of the LRRC8 protein family. If the cell volume increases as a result of inflowing water, these cellular valves open to allow the negatively charged chloride ions and uncharged osmolytes to flow out, returning the cell to its original state.

Structure of a volume-regulated anion channel

Although discovered only five years ago, important properties of these cellular valves have already been described. For example, it is known that, besides their role in volume regulation, VRACs play an important role for the uptake of drugs used in cancer therapy and that they are responsible for the uncontrolled release of neurotransmitters after a stroke. Despite these advances, the molecular make-up of VRACs and the basis for their selectivity has remained elusive. Researchers at the Department of Biochemistry of the University of Zurich have now closed this gap in our understanding. Using cryo-electron microscopy and X-ray crystallography, the team led by Prof. Raimund Dutzler has determined the detailed molecular structure of a VRAC. In addition, the researchers analyzed the functional properties of the protein through electrophysiological techniques.

From form to function

VRACs consist of six subunits, which are arranged around an axis that defines the ion permeation pore. The protein, which is located in the membrane, contains a small extracellular and a large intracellular domain. The latter probably plays an important role in channel activation. The extracellular domain constricts the channel and functions as selectivity filter. “The positive residues in this filter attract negatively charged chloride ions and allow their permeation while excluding larger molecules from entering the cell,” explains Raimund Dutzler.

Potential approaches for the treatment of ischemia and cancer

With their work, the UZH scientists have provided a foundation for a better understanding of the molecular mechanisms underlying cell volume control. “This knowledge provides a valuable basis for the development of potential novel drugs,” states Dutzler. In case of cerebral ischemia or stroke, the astrocytes in the brain swell. The resulting uncontrolled outflow of the neurotransmitter glutamate, which is mediated by VRACs, has detrimental consequences for affected people. Such cases could benefit from the development of specific blockers. Another potential application relates to the role of VRACs in cancer therapy: A cell-specific activation of VRACs could improve the uptake of therapeutics into cancer cells.

The project was funded by a grant of the Swiss National Science Foundation (SNSF). The cryo-EM data were collected with electron microscopes of the Center for Microscopy and Image Analysis of UZH, which were acquired thanks to a substantial contribution of the Mäxi Foundation. X-ray data were collected at the Swiss Synchrotron Light Source of the Paul Scherrer Institute.