(jpg, 2.01 MB) The Pantanal in Brazil is the world’s largest tropical wetland. Piranhas and caimans can be found amidst the water hyacinths. (Image: © Michel Roggo / roggo.ch)

(jpg, 2.08 MB) The river Sense is a wild river in the foothills of the Alps and the last Swiss river without a power plant. (Image: © Michel Roggo / roggo.ch)

(jpg, 2.14 MB) Rotomairewhenua (Blue Lake), high up in New Zealand’s Southern Alps, is sacred to the Māori. The lake has the clearest freshwater ever reported. (Image: © Michel Roggo / roggo.ch)

(jpg, 2.14 MB) A Florida red-bellied turtle at home in the massive stream of freshwater in Florida’s underground, which reaches the surface through numerous sources. (Image: © Michel Roggo / roggo.ch)

(jpg, 2.18 MB) Cichlids in Lake Malawi, home to more species of fish than any other lake in the world. (Image: © Michel Roggo / roggo.ch) 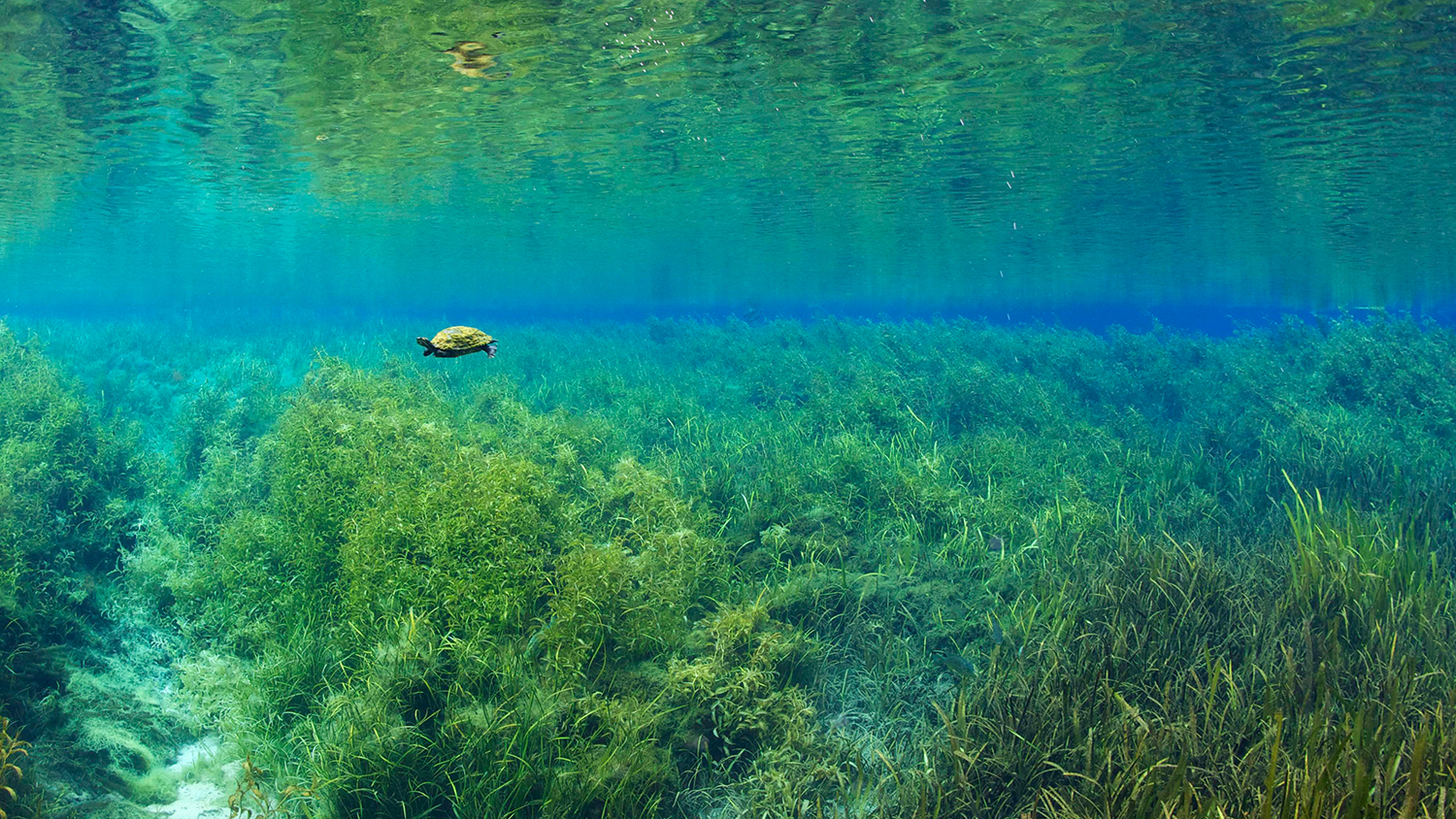 A Florida red-bellied turtle at home in the massive stream of freshwater in Florida’s underground, which reaches the surface through numerous sources. (Image: © Michel Roggo / roggo.ch)

The special exhibition brings together the beauty of Lake Baikal, the Sense river, the Iguazú Falls, the Ross Ice Shelf and many more places in far-flung corners of the world. All of the photographs share a common theme – water. To explore this wide-ranging topic, Michel Roggo launched his “Freshwater Project” and traveled around the world for seven years to take pictures of streams, rivers and lakes in about 40 different places. His aim was to document all major types of freshwater on Earth, above as well as below the water surface. This required the 69-year old photographer to put on his diving gear and get in the water. “We know what coral reefs look like,” he says, “but what about the waters in our own backyard? I’m always on the lookout for interesting and dramatically-lit scenes – beneath the ice of a frozen mountain stream or in the algae in a pond. These habitats are incredibly beautiful, but not many people ever get to see them.”

The Natural History Museum in Freiburg (Switzerland) staged an exhibition with Roggo’s pictures, which is now being presented in the Zoological Museum of the University of Zurich. The exhibition gives visitors glimpses of magical underwater landscapes and exotic flora and fauna, ice and rock formations. Various making-of films highlight the photographer’s often arduous journeys and the extreme conditions he and his team came up against. For his Freshwater Project, Roggo mostly collaborated with local guides, including members of indigenous peoples, biologists, dive guides, skippers and pilots. “Michel Roggo has put together an impressive record of the most important freshwater habitats on Earth,” says Isabel Klusman, Head of the Zoological Museum. “This is a key step in raising awareness for these fragile and often endangered domains.”

The exhibition is organized into five main themes. Water as a dynamic habitat for animals requires considerable feats of adaptation. And yet, challenging conditions such as murky light and ice-cold, acidic or oxygen-depleted waters give rise to plants that grow into veritable aquatic paradises. The exhibition also covers the glaciers and ice caps of the polar regions, where two thirds of the world’s freshwater is stored, as well as the rock formations created, formed and destroyed by water and erosion. Last but not least Roggo’s pictures also focus on water sources, where groundwater escapes the ground and reaches the surface. Pure water is essential to life, which is why most water sources in industrialized countries are already known. The underwater photographs of pristine water sources taken by Roggo, however, are all the more astonishing.

Freiburg native Michel Roggo is an internationally renowned specialist in the field of freshwater photography. His award-winning pictures from over 130 expeditions have been exhibited and published all over the world. The AQUA exhibition is the first time Michel Roggo’s pictures are shown in Zurich.

Behind the scenes with Michel Roggo (in German)
- Monday, 30 September, 6:15pm to 7:30pm
- Photographer Michel Roggo talks about the experiences and adventures that led to his pictures and answers questions from the audience.

Publication
The 280-page picture book AQUA – wasser.eau.water, on sale in the museum shop for CHF 39.00, is written in German, French and English and includes a selection of 360 photographs from the Freshwater Project.