Department of Anthropology
University of Zurich 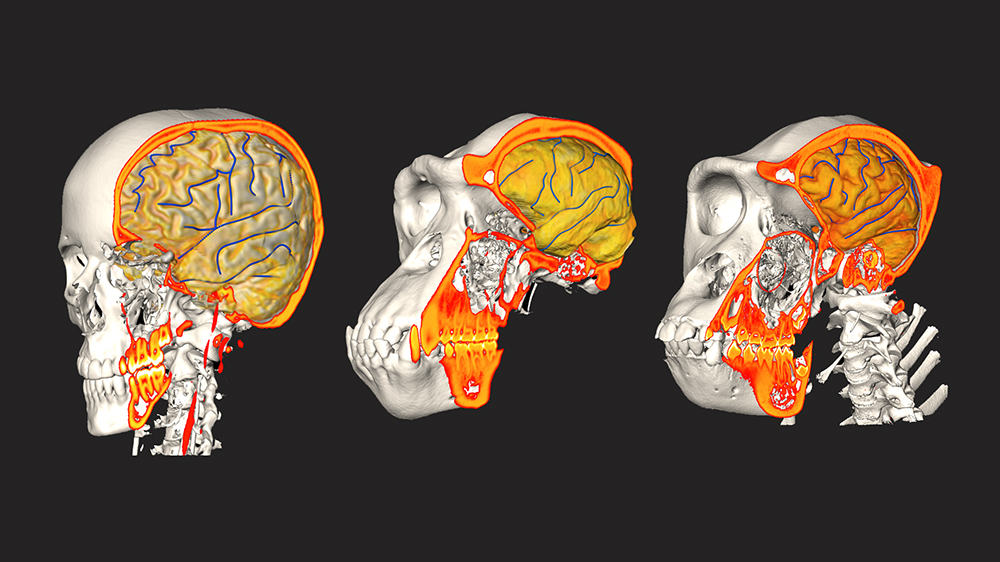 The human brain is like a fish in an aquarium, floating inside the liquid-filled braincase – but filling it out almost completely. The relationship between the brain and the braincase, and how they interacted during human evolution, has been occupying the minds of researchers for almost a century. They addressed this question by studying brain-braincase relationships in our own species, and in our closest living relatives, the great apes.

José Luis Alatorre Warren, researcher at the Department of Anthropology of the University of Zurich, tackled this question using computed tomography (CT) and magnetic resonance imaging (MRI) data from humans and chimpanzees. By combining CT/MRI data, he was able to quantify the spatial relationships between brain structures such as gyri (convolutions) and sulci (furrows) on the one hand, and cranial structures such as bony sutures on the other. The results show that the characteristic spatial relationships between brain and bone structures in humans are clearly distinct to those in chimpanzees. While the brain and its case continued to evolve side by side, they did so along largely independent evolutionary paths.

Bipedalism leads to changes in braincase

For example, brain structures related to complex cognitive tasks such as language, social cognition and manual dexterity expanded significantly in the course of human evolution.  This becomes visible as a shift of the neuroanatomical boundaries of the frontal lobe of the brain. This shift, however, did not affect the bony structures of the braincase. Instead, changes in the braincase largely reflect adaptations to walking upright on two legs, or bipedalism. For example, the opening at the skull base for the spinal cord moved forward during human evolution in order to optimize balance of the head atop the vertebral column. However, these evolutionary changes to the braincase did not have an effect on our cerebral structures.

Point of reference for future research

“The brain followed its own evolutionary path of neural innovation while freely floating in the braincase,” summarizes Alatorre Warren. “The position and size of braincase bones thus don’t enable us to draw conclusions about evolutionary changes in the size or rearrangement of adjacent brain regions.” Co-authors Marcia Ponce de León and Christoph Zollikofer believe their study’s data provide an important point of reference for future research: “Having answered the brain-braincase question for humans and great apes, we can now take a fresh look at the braincases of fossil hominids.”

Transformation of braincase (black) and brain (red-to-blue) structures from chimpanzee to human, and back to chimpanzee. (Animation: J.L. Alatorre Warren)