(jpg, 2.40 MB) Drummers of the Nutifafa Bɔbɔɔbɔ Group from Kpando at a performance in the Volta region of Ghana. (Image: © Eyram Fiagbedzi, 2018) 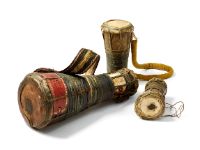 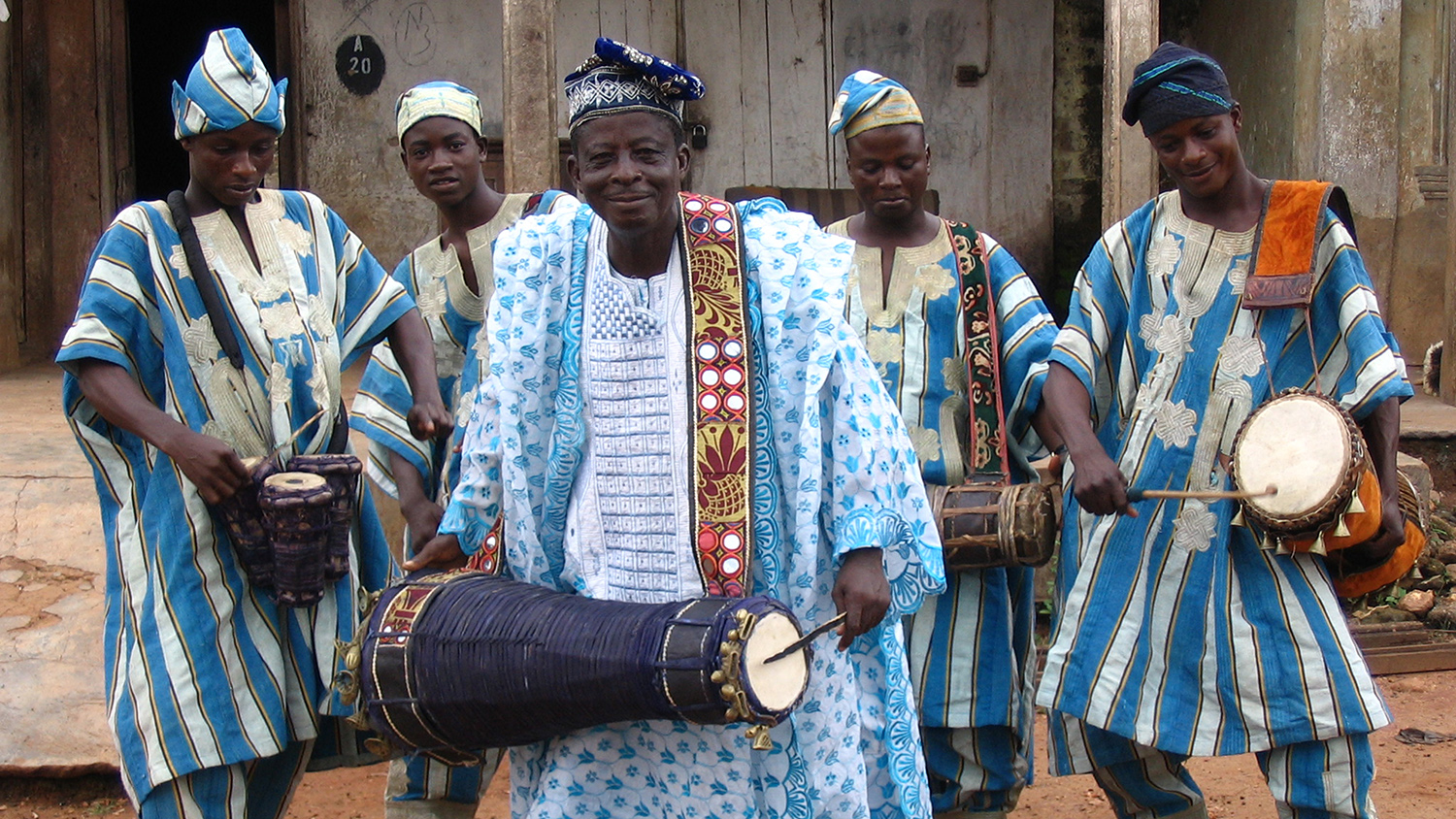 The title of the exhibition, “Talking with drums”, can be taken quite literally: Drummers in West Africa use their instruments to imitate the rhythm and melody of spoken language, such as the languages of the Yorùbá in South Western Nigeria or the Ashanti in Ghana. Both speak tonal languages where the relative pitch of syllables determines the meaning of an utterance.

Conversation with the ensemble, the audience – and the world

At many political and religious events, percussionists use drums to welcome guests of honor and recite their biographies. They recount oral histories and prayers, take political stances and thus mediate between the actuality of the moment and the communities’ cultural memories. “Besides having the musical and motor skills, this requires tremendous cultural and social knowledge,” says exhibition curator and anthropologist Alexis Malefakis. “This knowledge is expanded and refined over the course of a lifetime.” This is also why the musicians are greatly respected in society.

They combine the drum rhythms with further instruments such as bells and rattles to create complex polyrhythmic music. “The drummers don’t base their music on a fixed tact like we do, but orient their playing on other instruments,” explains Malefakis. “In that way numerous conversations between different instruments in the ensemble and at the same time with the audience can be heard.”

The exhibition showcases the drum sets used by various ethnic groups in different musical genres. Film and sound recordings provide insights into what the music sounds like and for which events it is used. An interactive video allows visitors to dismantle a polyrhythmic piece of music into its individual rhythms and then reassemble it.

The various elements of a drum ensemble come together in modern drum kits, which take up a prominent space in the exhibition and connect the traditional context with contemporary popular music.  “Drummers also made their voices heard and combined their music with influences from other musical cultures during the colonial period and the era of transatlantic slave trade,” explains Malefakis, who himself also plays the drums. “This is ultimately how jazz, soul, reggae and hip hop developed. West African musicians have therefore significantly shaped global musical history.”

And Western African musicians also adopted aspects from other regions to create new artistic forms of expressions, such as with the “afrobeat” genre developed by Fela Kuti in the 1970s, which blended musical innovation with religious traditions and political visions and which received international acclaim.

But not everyone is open to such kinds of musical innovation. In northern Nigeria, for example, conservative sections of the Muslim population view popular music as an attack on their moral beliefs. And some extremists are even opposed to traditional music genres, such as the jihadists of the terrorist militia Boko Haram in northeastern Nigeria, for whom music is incompatible with their interpretation of Islam. By intimidating and even murdering musicians, they are attempting to eradicate cultural knowledge that in part originates in pre-Islamic traditions.

Carrying the exhibition across Swiss borders

Curator Malefakis could count on the support of an interdisciplinary team of scientists from Ghana, Nigeria, Germany and Switzerland. Their contributions accompanying the exhibition will for once not be printed in a brochure, but published on a website that also features extensive audiovisual materials. “This way we can make the exhibition visible and audible far beyond Swiss borders, for example in Ghana and Nigeria,” says Malefakis. Indeed, this is what the exhibition is all about: West African percussion skills in a global conversation.