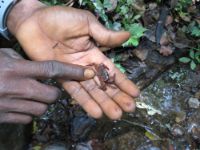 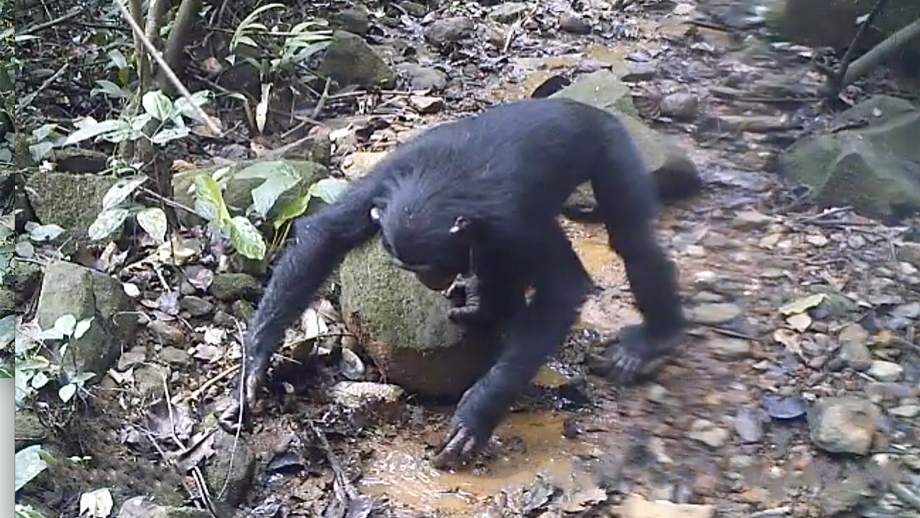 “Our study is the first evidence showing that non-human apes regularly catch and eat aquatic fauna,” says Kathelijne Koops, researcher at the Department of Anthropology at the University of Zurich. She and her team discovered that chimpanzees in the rainforest of the Nimba Mountains in Guinea consumed fresh-water crabs year-round. The chimpanzees searched for crabs in shallow streams in the mountainous rainforest region by scratching and churning up the riverbed with their fingers.

The chimpanzees ate crabs irrespective of whether ripe fruit was available as an alternative. Surprisingly there was no correlation between the crab-fishing activity and the amount of monthly rainfall. The rate of crab-fishing also remained the same in the dry and in the rainy seasons: Even in the dry season there was enough water in the streams to provide a habitat for crabs. The chimpanzees, however, fished more often for crabs when they were eating fewer ants, which would indicate that crabs and ants have a similar nutritional value for the chimpanzees.

“Female chimpanzees and their offspring fished for crabs more often and for longer than adult males, which we had not expected,” says anthropologist Koops. A possible explanation for this finding may be that crabs provide essential fatty acids, as well as micronutrients such as sodium and calcium, which are crucial for maternal and infant health.

Important for the developing brain

The findings on chimpanzees, our closest living relatives, may contribute to our understanding of why aquatic fauna became more and more important as a source of nutrition in the course of human evolution. It is thought that as long as 1.95 million years ago, hominins (ancestors of Homo sapiens) consumed turtles, crocodiles and fish. It is assumed that the regular consumption of these types of aquatic fauna facilitated the growth of the developing brain in early Homo. That is because these creatures contain high amounts of polyunsaturated fatty acids, which are required for optimal brain growth and function.

“These findings on wild chimpanzees contribute to our understanding of hominin nutrition,” says Kathelijne Koops. First, the findings suggest that fishing for crabs in hominins may not have been restricted to lakes, rivers or coastlines, and that those living in forest regions may have also consumed crabs. Second, aquatic fauna may have been a regular part of some hominins’ diets and not just a seasonal fallback food. Third, the consumption of nutritionally rich crabs and other aquatic fauna may have been especially important for female hominins and their young.