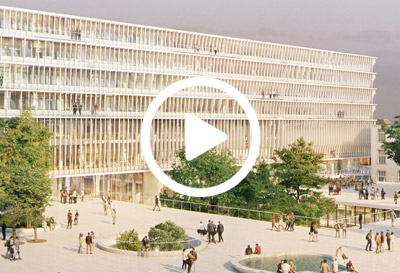 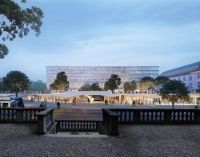 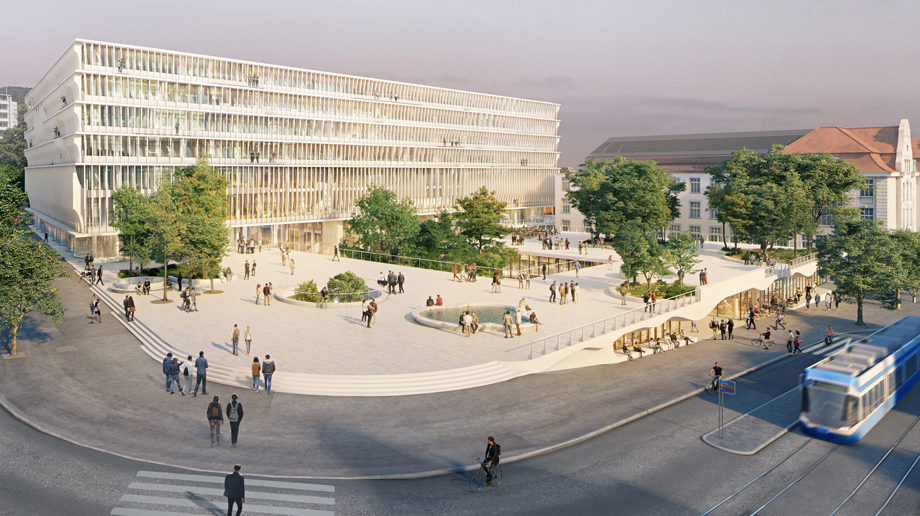 View of the FORUM UZH with the Gloriaterrasse. (Herzog & de Meuron)

The University of Zurich (UZH) is currently spread out across several sites and many different premises in the city. This, along with some infrastructure elements that are outdated, makes it increasingly difficult to run the University in an efficient manner. The new building FORUM UZH in 2027 will be a step forwards in terms of meeting the University’s growing need for space and updating its technology infrastructure. The two-campus strategy is designed to bundle UZH’s research areas according to subjects and concentrate them on the City and Irchel campuses.

Science and the city

“The exchange of knowledge and research as well as interaction with the public will get a great boost from this new main building for the 21st century,” says Michael Hengartner, President of UZH. “UZH’s success is very much based on its strong roots in society. The FORUM UZH, located in the heart of the city, paves the way for developing new knowledge across a range of academic, economic and cultural networks and passing it on to society.”

The new education and research center will be built at the corner of Gloriastrasse and Rämistrasse. It will include a large library, teaching rooms, sports facilities, a cafeteria and public spaces. The lecture halls will replace current teaching rooms for medical students in the UniversityHospital Zurich’s main site and Gloriarank, which will be pulled down. In addition, the new building will also be used by staff and students of law, business and economics, and modern languages. The FORUM UZH will accommodate a total of 6,500 students and 1,100 employees, and provide around 700 work spaces for students.

New center for education and research

The new building designed by Herzog & de Meuron is inspired by the surrounding University and ETH buildings, which are set back from the street, use below-ground plinths and terraces to take into account the topography along Rämistrasse, and are characterized by spacious central halls. The FORUM UZH is a contemporary embodiment of these urban and interior features.

The FORUM UZH’s plinth will be built into the slope with terraces, creating plateaus that connect the building’s interior with its exterior and serve as spaces where students, researchers and the public can interact. The plinth will primarily be used for teaching. It includes nine lecture halls with a total of 4,000 seats, seminar rooms for a variety of teaching formats, a café, shops as well as five gymnasiums and other sports facilities for students, high-school students and people living in the neighborhood.

A plaza in the heart of the university district

A stand-alone building for research will “hover” above the plinth. The trapezoid structure will primarily house offices and seminar rooms as well as a library featuring a two-story reading room and a space for learning that looks out onto the main building of UZH.  The new structure is set back from the street far enough to allow for a central plaza in the heart of the university district.

“Only by placing many of the uses in an elevated building were we able to bring daylight into the terraced plinth and make room for the public space that we were aiming for. The inviting atmosphere and the numerous trees will make the large plaza in front of the new building and also the Forum itself a new focal point of university and urban life,” explain Herzog & de Meuron.

The large central hall forms the heart of the new building. It is a space for recreation, meeting people, working, and hosting events. This “academic marketplace” connects the trapezoid structure and the below-ground plinth and continues outdoors as a garden.

All of the projects entered into the FORUM UZH competition will be on public display from 9 January 2019 until 24 January 2019 midday in the Lichthof of UZH’s main building.

Invitation to the public vernissage