(jpg, 1.16 MB) Regional share of glaciers in sea-level rise from 1961 to 2016. The cumulative regional and global mass change of glaciers (in gigatons, 1 Gt = 1 billion tons) corresponds to the volume of the bubbles. Example: With more than 3,000 Gt, glaciers in Alaska (ALA) contributed the most to the increase in sea levels. The glaciers in South West Asia (ASW, blue bubble) were the only ones to increase in mass. (Zemp) 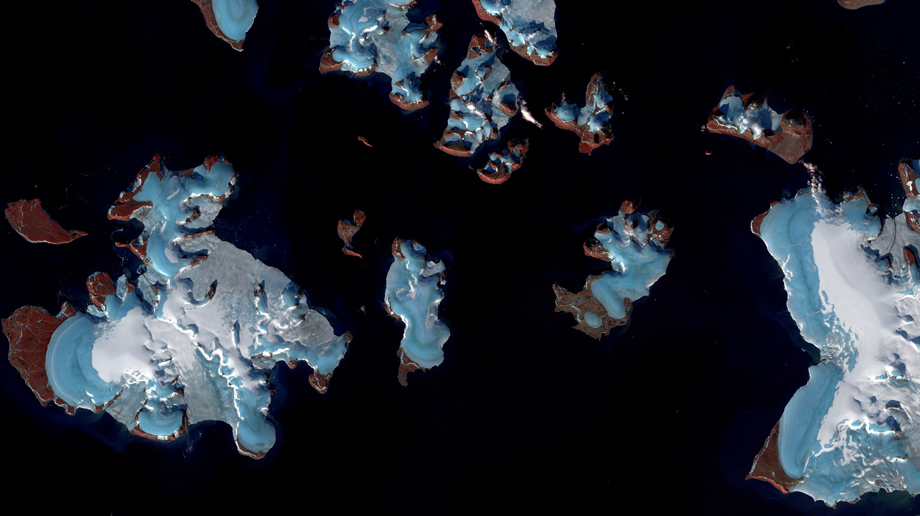 Melting glaciers in Russia’s Arctic territory. This image shows the blue glaciers on the reddish-brown Franz Josef Land archipelago in the Arctic Ocean (black). The glaciers (blue) are covered with little or no snow (white), which is a clear indicator of significant loss of mass. (Copernicus Sentinel data 2017)

Glaciers have lost more than 9,000 billion tons (that is 9 625 000 000 000 tons) of ice between 1961 and 2016, which has resulted in global sea levels increasing by 27 millimeters in this period. The largest contributors were glaciers in Alaska, followed by the melting ice fields in Patagonia and glaciers in the Arctic regions. Glaciers in the European Alps, the Caucasus mountain range and New Zealand were also subject to significant ice loss; however, due to their relatively small glacierized areas they played only a minor role when it comes to the rising global sea levels.

For the new study, the international research team led by UZH combined glaciological field observations with geodetic satellite measurements. The latter digitally measure the surface of the Earth, providing data on ice thickness changes at different points in time. The researchers were thus able to reconstruct changes in the ice thickness of more than 19,000 glaciers worldwide. This was also possible thanks to the comprehensive database compiled by the World Glacier Monitoring Service from its worldwide network of observers, to which the researchers added their own satellite analyses.

“By combining these two measurement methods and having the new comprehensive dataset, we can estimate how much ice has been lost each year in all mountain regions since the 1960s,” explains Michael Zemp, who led the study. “The glaciological measurements made in the field provide the annual fluctuations, while the satellite data allows us to determine overall ice loss over several years or decades.”

The global mass loss of glacier ice has increased significantly in the last 30 years and currently amounts to 335 billion tons of lost ice each year. This corresponds to an increase in sea levels of almost 1 millimeter per year. “Globally, we lose about three times the ice volume stored in the entirety of the European Alps – every single year!” says glaciologist Zemp. The melted ice of glaciers therefore accounts for 25 to 30 percent of the current increase in global sea levels. This ice loss of all glaciers roughly corresponds to the mass loss of Greenland’s Ice Sheet, and clearly exceeds that of the Antarctic.

The study was supported by the following organizations: