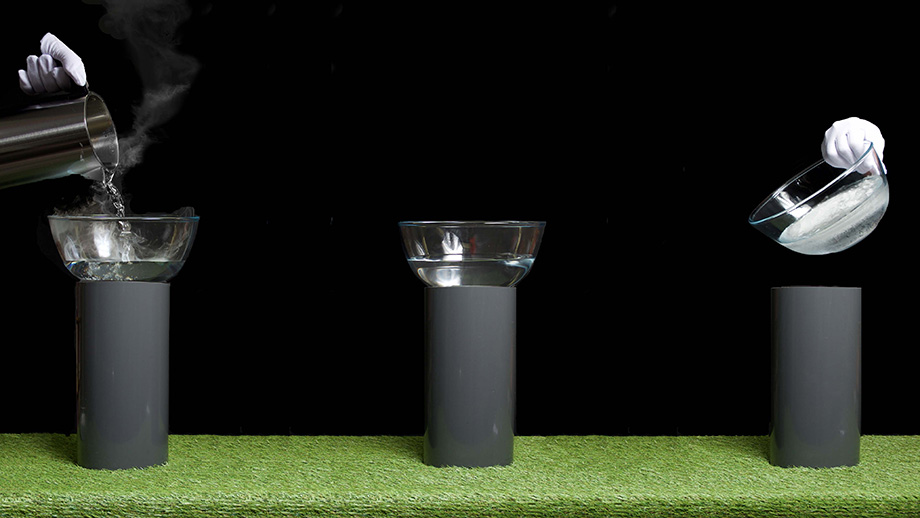 Thermischer Schwingkreis
Theoretically, this experimental device could turn boiling water to ice, without using any energy. (A. Schilling, A.C. Mangham)

If you put a teapot of boiling water on the kitchen table, it will gradually cool down. However, its temperature is not expected to fall below that of the table. It is precisely this everyday experience that illustrates one of the fundamental laws of physics – the second law of thermodynamics – which states that the entropy of a closed natural system must increase over time. Or, more simply put: Heat can flow by itself only from a warmer to a colder object, and not the other way round.

The results of a recent experiment carried out by the research group of Prof. Andreas Schilling in the Department of Physics at the University of Zurich (UZH) appear at first sight to challenge the second law of thermodynamics. The researchers managed to cool a nine-gram piece of copper from over 100°C to significantly below room temperature without an external power supply. “Theoretically, this experimental device could turn boiling water to ice, without using any energy,” says Schilling.

To achieve this, the researchers used a Peltier element, a component commonly used, for example, to cool minibars in hotel rooms. These elements can transform electric currents into temperature differences. The researchers had already used this type of element in previous experiments, in connection with an electric inductor, to create an oscillating heat current in which the flow of heat between two bodies perpetually changed direction. In this scenario, heat also temporarily flows from a colder to a warmer object so that the colder object is cooled down further. This kind of “thermal oscillating circuit” in effect contains a “thermal inductor”. It functions in the same way as an electrical oscillating circuit, in which the voltage oscillates with a constantly changing sign.

Until now, Schilling’s team had only operated these thermal oscillating circuits using an energy source. The researchers have now shown for the first time that this kind of thermal oscillating circuit can also be operated “passively”, i.e. with no external power supply. Thermal oscillations still occurred and, after a while, heat flowed directly from the colder copper to a warmer heat bath with a temperature of 22°C, without being temporarily transformed into another form of energy. Despite this, the authors were also able to show that the process does not actually contradict any laws of physics. To prove it, they considered the change in entropy of the whole system and showed that it increased with time – fully in accordance with the second law of thermodynamics.

Although the team recorded a difference of only about 2°C compared to the ambient temperature in the experiment, this was mainly due to the performance limitations of the commercial Peltier element used. According to Schilling, it would be possible in theory to achieve cooling of up to -47°C under the same conditions, if the “ideal” Peltier element – yet to be invented – could be used: “With this very simple technology, large amounts of hot solid, liquid or gaseous materials could be cooled to well below room temperature without any energy consumption.”

The passive thermal circuit could also be used as often as desired, without the need to connect it to a power supply. However, Schilling admits that a large-scale application of the technique is still a long way off. One reason for this is that the Peltier elements currently available are not efficient enough. Furthermore, the current set-up requires the use of superconducting inductors to minimize electric losses.

The UZH physicist considers the work more significant than a mere “proof-of-principle” study: “At first sight, the experiments appear to be a kind of thermodynamic magic, thereby challenging to some extent our traditional perceptions of the flow of heat.”