(jpg, 690 kB) Visualization of gas in and around a Milky-Way-like galaxy (center) in today's Universe as predicted by a cosmological simulation run by the author. (Image: Robert Feldmann) 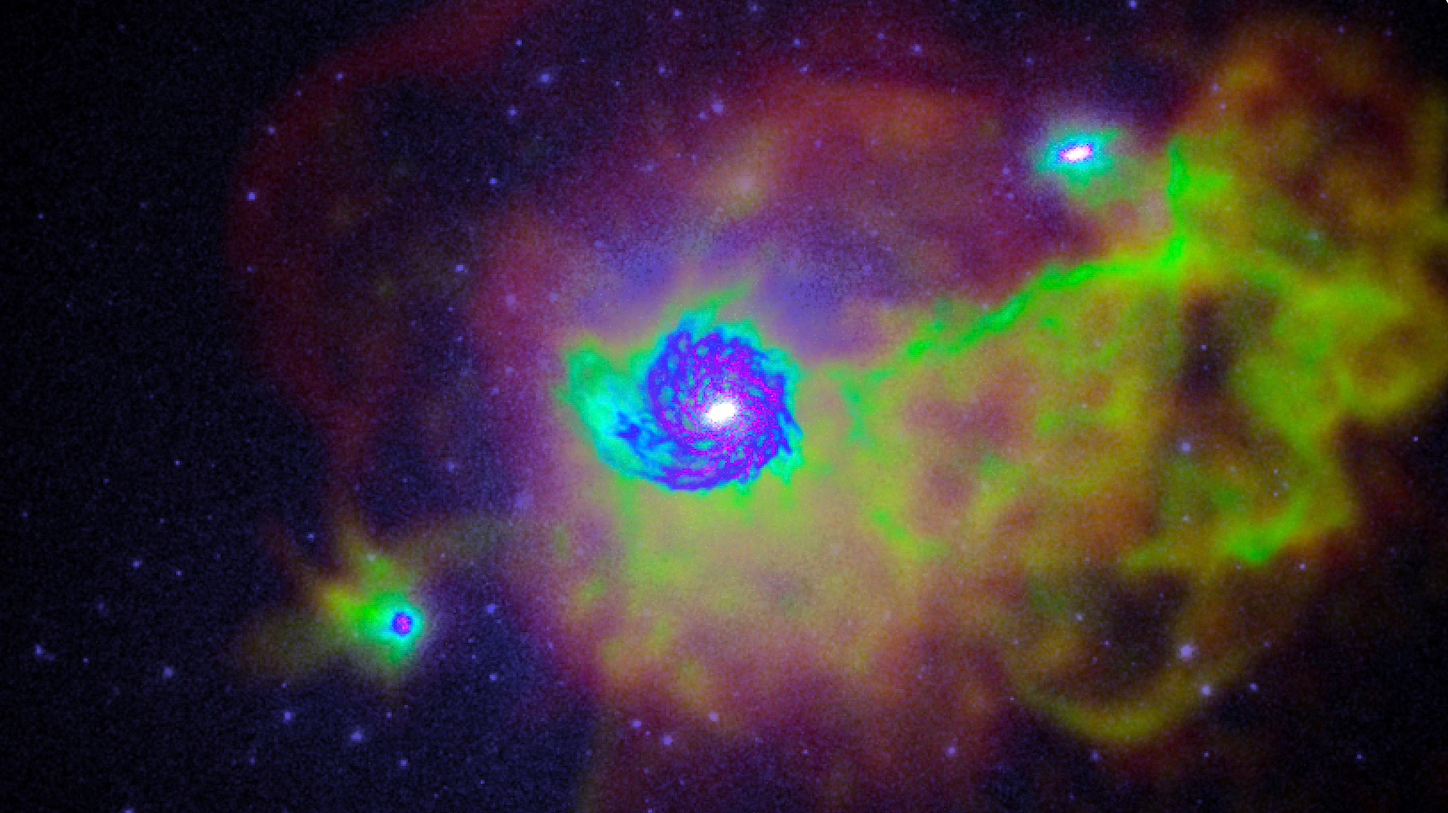 Stars are born in dense clouds of molecular hydrogen gas that permeates interstellar space of most galaxies. While the physics of star formation is complex, recent years have seen substantial progress towards understanding how stars form in a galactic environment. What ultimately determines the level of star formation in galaxies, however, remains an open question.

In principle, two main factors influence the star formation activity: The amount of molecular gas that is present in galaxies and the timescale over which the gas reservoir is depleted by converting it into stars. While the gas mass of galaxies is regulated by a competition between gas inflows, outflows and consumption, the physics of the gas-to-star conversion is currently not well understood. Given its potentially critical role, many efforts have been undertaken to determine the gas depletion timescale observationally. However, these efforts resulted in conflicting findings partly because of the challenge in measuring gas masses reliably given current detection limits.

Typical star formation is linked to the overall gas reservoir

The present study from the Institute for Computational Science of the University of Zurich uses a new statistical method based on Bayesian modeling to properly account for galaxies with undetected amounts of molecular or atomic hydrogen to minimize observational bias. This new analysis reveals that, in typical star-forming galaxies, molecular and atomic hydrogen are converted into stars over approximately constant timescales of 1 and 10 billion years, respectively. However, extremely active galaxies (“starbursts”) are found to have much shorter gas depletion timescales.

“These findings suggest that star formation is indeed directly linked to the overall gas reservoir and thus set by the rate at which gas enters or leaves a galaxy,” says Robert Feldmann, professor at the Center for Theoretical Astrophysics and Cosmology. In contrast, the dramatically higher star-formation activity of starbursts likely has a different physical origin, such as galaxy interactions or instabilities in galactic disks.

This analysis is based on observational data of nearby galaxies. Observations with the Atacama Large Millimeter/Submillimeter Array, the Square Kilometer Array and other observatories promise to probe the gas content of large numbers of galaxies across cosmic history. It will be paramount to continue the development of statistical and data-science methods to accurately extract the physical content from these new observations and to fully uncover the mysteries of star formation in galaxies.

A Star is Born

Figure 1 shows a visualization of gas in and around a Milky-Way-like galaxy (center) in today's Universe as predicted by a cosmological simulation run by the author. Dense, atomic and molecular hydrogen typically forms an extended disk, here seen in bluish-purple at the center of the image. Stars (white) form throughout the gas disk. Additional star formation may take place in satellite galaxies, here seen at the top right and bottom left positions. Hot, low density gas (green and red hues) can be found at large distances, out to the edge of the dark matter halo surrounding the main galaxy (white circle). The image also shows a large number of dark matter substructures (purple) most of which are devoid of gas and stars.