Department of History, University of Zurich 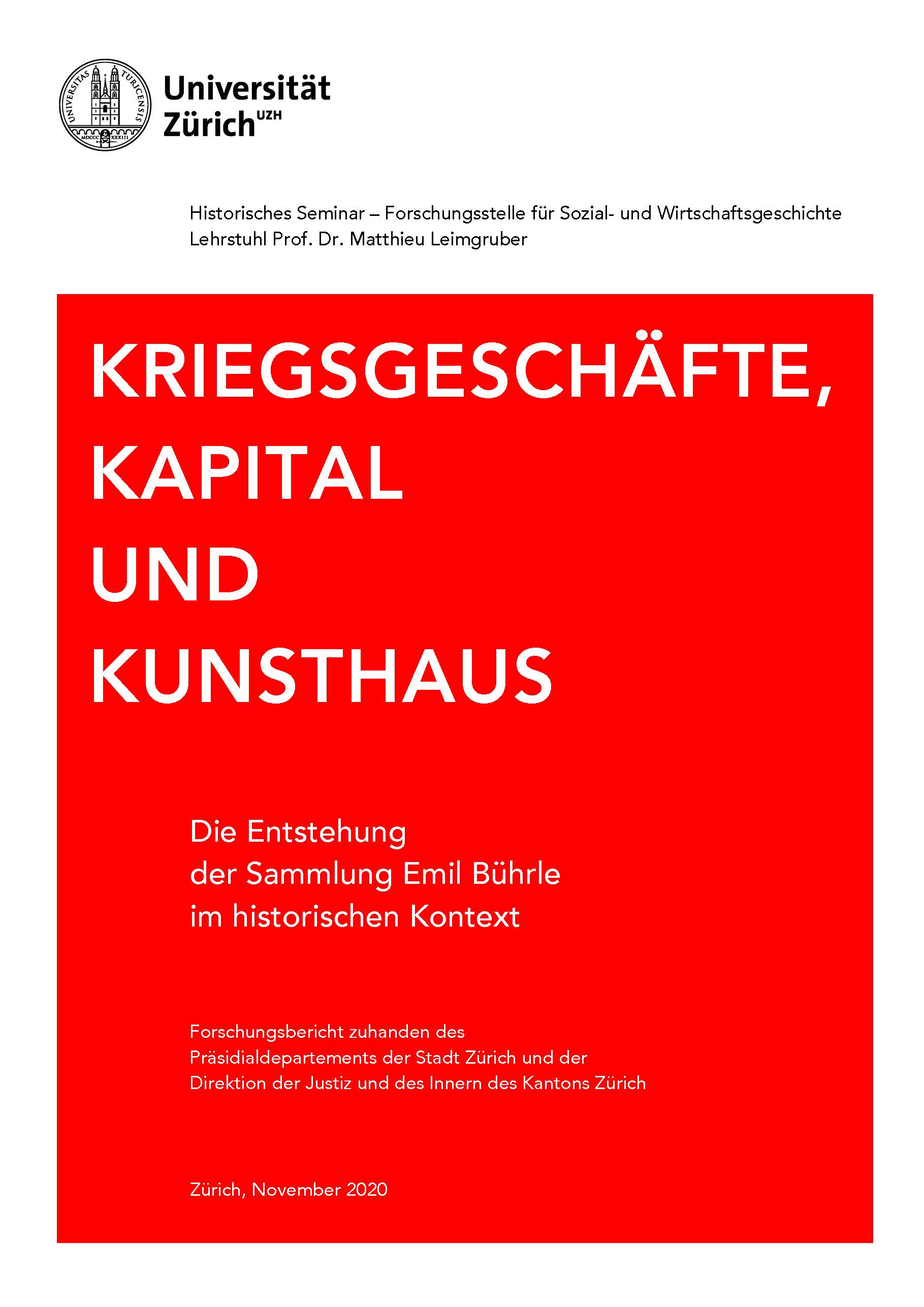 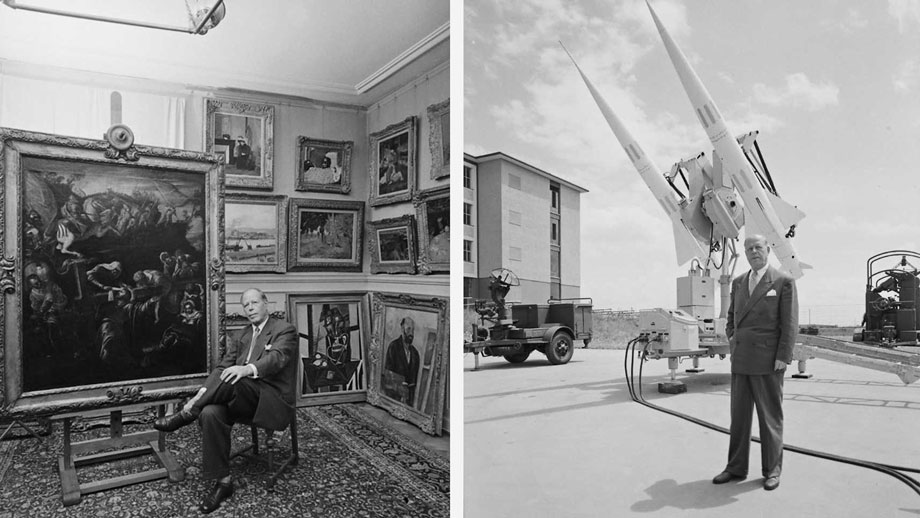 The David Chipperfield extension at the Kunsthaus Zurich, which will house works from E.G. Bührle’s collection, is due to open in 2021. The industrialist, art collector and patron Emil Bührle (1890–1956) remains a controversial figure, which is why the City and Canton of Zurich commissioned Matthieu Leimgruber, professor of modern and Swiss history at the University of Zurich, to examine the origins of the collection. The study seeks to illustrate the prevailing alliances as well as the convergences and conflicts of interest between business, politics and the art market before, during and after the Second World War.

The industrialist: from SME to Switzerland’s largest defense company

Emil Bührle came to Zurich from Magdeburg in 1924 to restructure the company Werkzeugmaschinenfabrik Oerlikon (WO). In the subsequent decades, he turned the SME (which had 140 employees in 1923) into Switzerland’s largest defense company – the Oerlikon-Bührle Group – with 6,000 employees in 1956.

In the interwar period, WO was involved in the covert German rearmament program and focused on the development and export of 20mm anti-aircraft guns. During the war, WO initially sold its guns to the Allied powers (for around CHF 60 million), and following the fall of France, to Nazi Germany and the Axis powers (for around CHF 540 million).

During the Second World War, the United States and Britain built over 185,000 Oerlikon guns under license, but never made any license payments as the company was blacklisted. However, Bührle did receive license payments worth around CHF 0.87 million from his shareholding in German arms company IKARIA Werken, which used forced labor during the war.

As soon as the defeat of Nazi Germany became apparent, Bührle switched allegiance back to the Allied powers. Up until the outbreak of the Korean War in June 1950, he successfully geared WO towards the Western Bloc, the modernization of the Swiss armed forces, and the recently decolonized countries.

In 1940, a series of fatal accidents at WO’s production facilities triggered Switzerland’s biggest strike action during the war. While left-wing groups accused Bührle of being a war profiteer, the bourgeois press praised his entrepreneurial spirit and success. Bührle’s business calculations increased his fortune from CHF 8 million in 1938 to CHF162 million in 1945. There is no doubt that arms dealing with Nazi Germany made him the richest man in Switzerland and paved the way for the acquisition of his art collection.

The networker: adaptable, pragmatic and opportunistic

In just one generation, Bührle rose from being an unknown German company executive to a prominent art collector, patron and respected figure on the Zurich social scene. “This incredible social advancement was down to Bührle’s enormous wealth, his art collection and cultural patronage, but also a combination of adaptability, pragmatism and ruthless opportunism,” explains Professor Leimgruber.

As part of the German rearmament networks during the interwar period, Bührle soon became a member of Swiss right-wing conservative circles, which maintained links to similar groups in Germany. After obtaining Swiss citizenship in 1937, he used his new-found wealth and initial art acquisitions to gain access to exclusive circles. In June 1940, as WO was directing its arms exports to Nazi Germany, Bührle was invited to sit on the collection committee and shortly after, to become a member of the Board of the Zürcher Kunstgesellschaft (ZKG).

Newcomer Bührle developed a strong alliance with banker and ZKG Chairman Franz Meyer-Stünzi – a high-profile descendant of “Old Zurich” with whom he shared pro-German affinities – to take the Kunsthaus Zurich forward.

Through his activities as an art collector and cultural patron, Bührle maintained excellent relations with local and national authorities and with international networks. There was an overlap between his business, social and art collecting interests, as trips across the Atlantic to sell WO missiles allowed Bührle to access the art markets in London and New York.

In the post-war period, Emil Bührle was well integrated in economically liberal and anti-communist circles. He saw himself as an entrepreneur “on the front line of this Cold War,” as he himself said in 1955.

The collector: an art collection built on arms exports

Bührle began buying art seriously in 1936 when he made his first million thanks to the expansion of the arms export business. At the time, the European art market was shaped by the economic crisis, and the prior confiscations and racial persecution of the Nazi regime. During the German Occupation, Bührle purchased 16 works on the Paris art market, on which art confiscated from Jewish gallery owners and collectors was traded. Of the 93 works that he acquired between 1941 and 1945, 13 were deemed “plundered” after the war. Bührle faced several restitution processes and later returned the works to their rightful Jewish owners. He was eventually able to buy back nine of the paintings. Bührle cannot be cleared of antisemitism, even though the documents accessed until now only contain one incriminating statement. For Matthieu Leimgruber, one thing is clear: “Bührle opportunistically exploited the situation of persecuted and fugitive Jews to build up his collection.”

Bührle chaired the Zürcher Kunstgesellschaft’s collection committee from 1953. He contributed over CHF 6 million to cover the full cost of an extension of the Kunsthaus, but died before it was inaugurated in 1958. Up until his death in 1956, Bührle had acquired 600 artworks for some EUR 39 million, including prestigious impressionist and modernist paintings. “This world-class art collection was built up using the immense wealth that Bührle amassed before, during and after the Second World War through arms exports,” says Leimgruber.

In 1960, Bührle’s heirs bequeathed 200 of his artworks, which were exhibited in a private museum on Zurich’s Zollikerstrasse, to the Foundation Emil Bührle Collection. Half a century later, the collection is set to move to an extension of the Kunsthaus, making Zurich an international center for French impressionist art. For Leimgruber, this development is the culmination of almost a century of interconnection “between Emil Bührle’s arms dealing, and the economic, social and cultural capital he built up to become a prominent figure of the Zurich elite and the Kunsthaus Zurich.”

Due to allegations of whitewashing, UZH arranged two external reviews of this research paper.   Jakob Tanner, professor emeritus of modern history, and Esther Tisa Francini, historian and head of provenance research at the Museum Rietberg, assessed an earlier version of the paper from 20 July 2020. Both concluded that it demonstrated a high level of academic rigor, and adhered to best practice in commissioned historical research.

However, they considered it problematic that the research was supervised by a steering committee with representatives of the parties who commissioned the study, and of the Foundation Bührle Collection, the ZKG and the Kunsthaus. In light of this, they recommended modifying two reformulations, which the author had made in an earlier draft following a suggestion from members of the steering committee. The author has implemented this recommendation by incorporating a number of new, additional sources. Overall, the expert reviewers considered the allegations of whitewashing to be baseless.