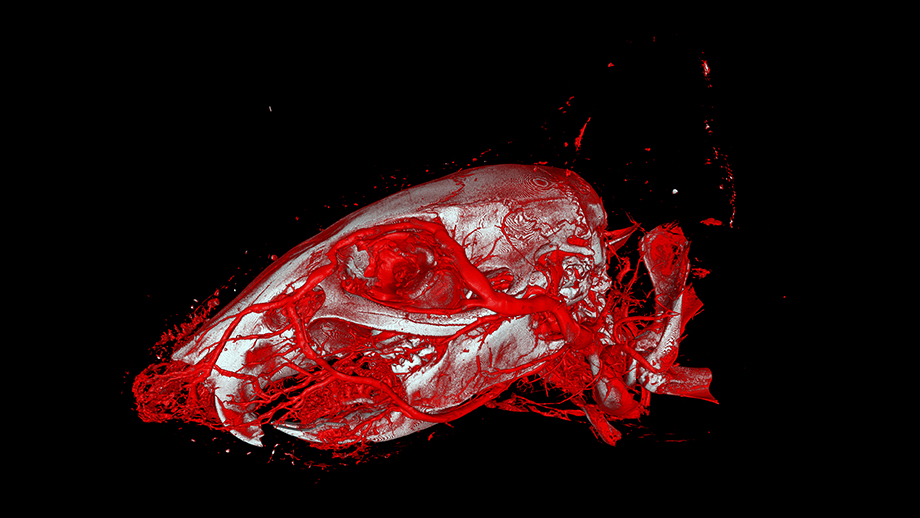 Various diseases in humans and animals – such as tumors, strokes or chronic kidney disease – damage the blood vessels. Capillaries, the smallest blood vessels in the body, are particularly affected. The large surface area of the capillary network enables oxygen to be exchanged between the blood and the surrounding tissue, such as the muscles when we exercise or the brain when we think.

For the diagnosis and treatment of cardiovascular and other diseases, it is important to know the three-dimensional structure of blood vessels. This knowledge of the exact anatomy of the capillaries in humans and animals is also crucial for basic research. It enables researchers to investigate diseases that attack the blood vessels and evaluate new treatments. Researchers at the University of Zurich (UZH), the National Centre of Competence in Research Kidney.CH and the Biomaterials Science Center of the University of Basel have now developed a novel X-ray contrast agent called “XlinCA”, with which capillaries can be made visible much more precisely using computer tomography.

Previously, contrast agents were added to polymerizing plastic resins before they were injected into the blood vessels of euthanized animals. However, it is very difficult to completely fill out the delicate capillaries in various organs with viscous resins. “Without years of experience using the right injection techniques, the capillaries are often only partially filled, or missing entirely. Up to a quarter of the resulting images are therefore unusable,” says Willy Kuo, a postdoctoral researcher at the Institute of Physiology of UZH. By using “XlinCA” instead of other contrast agents, up to 25 percent fewer animals would be needed for experiments, states Kuo.

The basic problem with conventional methods is that plastic and water do not mix. This results in water inclusions where the contrast agent is absent, which causes disconnected vessel segments on the X-ray image. While the water-soluble X-ray contrast agents used in medicine may not have this problem, they cannot be solidified and leak through blood vessel walls into the surrounding tissue within minutes.

Contrast agents for medical use in humans consist of small molecules and are relatively simple to produce. “A custom contrast agent for ex vivo use was significantly more difficult to synthesize, since it is made up of polymers – molecules bonded together in long chains,” says Bernhard Spingler, professor at UZH’s Department of Chemistry. “XlinCA” has several advantages over previously used X-ray contrast agents: It is easy to use and enables complete and uninterrupted vascular imaging. It also allows multiple organs or even whole animals such as mice to be examined at the same time.