(jpg, 2.48 MB) During shelling, dolphins trap fishes inside large empty gastropod shells. They are then brought to the surface and vigorously shaken so the fish falls into their open mouth. (Image: Sonja Wild, Dolphin Innovation Project) 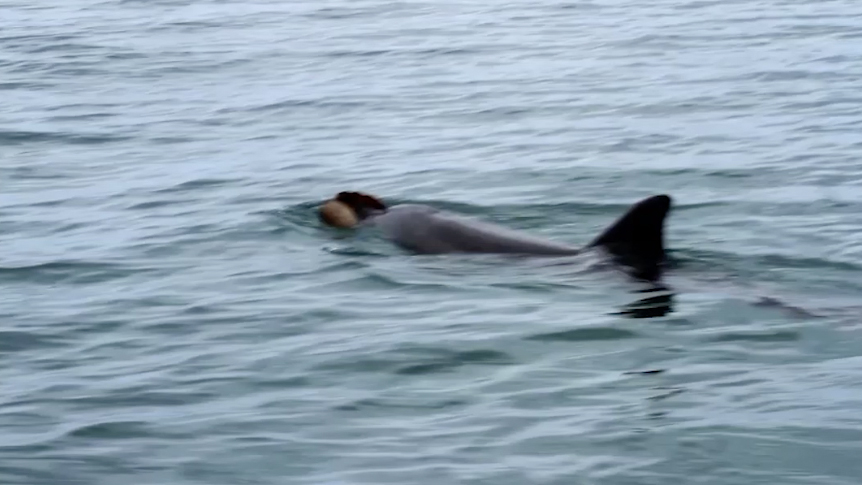 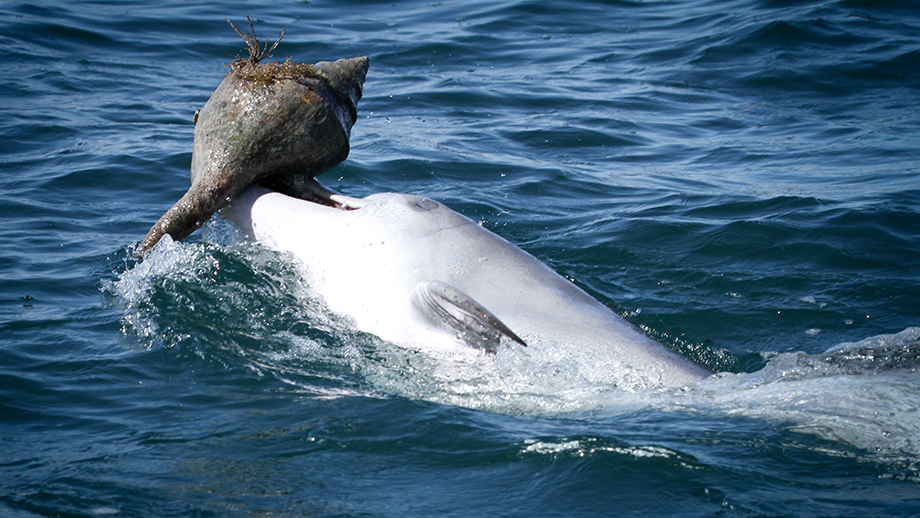 Dolphins use unusual techniques to obtain food: One of them, called “shelling”, is used by the dolphins in Shark Bay in Western Australia. Dolphins in this population trap fishes inside large empty gastropod shells. The shells are then brought to the surface and vigorously shaken so that the water drains out and the fish falls into their open mouth. Using the empty shell in this manner is comparable to tool use in humans.

Dolphins learn directly from their peers

It was previously thought the only way dolphins could learn new foraging methods while with their mother, a process known as vertical social transmission. However, a study initiated by Michael Krützen, director of the Department of Anthropology at the University of Zurich (UZH), has now shown that “shelling” is mainly passed on between peers rather than across generations – that is, via horizontal transmission. “Our results provide the first evidence that dolphins are also capable of learning from their peers as adults,” says Krützen. The analysis of extensive behavioral, genetic and environmental data spanning more than a decade led to these findings.

Cultural behavior similar to that of great apes

“This is an important milestone. It shows that cultural behavior of dolphins and other toothed whales is much more similar to the behavior of great apes, including humans, than was previously thought,” says Krützen. Gorillas and chimpanzees also learn new foraging techniques through both vertical and horizontal transmission. Although their evolutionary history and their environments are very different, there are striking similarities between cetaceans and great apes, according to Krützen: “Both are long-lived mammals with large brains that are capable of innovation and of passing on cultural behaviors.”

Behavioral observation over more than 10 years

The researchers made their discovery between 2007 and 2018 in the Western Gulf Zone of Shark Bay, where they observed Indo-Pacific bottlenose dolphins (Tursiops aduncus) and documented how the shelling behavior was spread within the population. During this time, they identified more than 1,000 individuals from around 5,300 encounters with dolphin groups. “In total we documented 42 individual uses of shelling by 19 different dolphins,” says study leader Sonja Wild, who completed her PhD at the University of Leeds, and is now a postdoc at the University of Konstanz.

This discovery that wild dolphins can learn new foraging techniques outside of the mother-calf bond significantly widens our understanding of how they can adapt to fluctuating environmental conditions through behavioral changes. “Learning from others allows for a rapid spread of novel behaviors across populations,” says Wild.

For example, an unprecedented marine heatwave in 2011 was responsible for wiping out a large number of fish and invertebrates in Shark Bay, including the gastropods inhabiting the shells. “While we can only speculate as to whether the heatwave and subsequent prey depletion gave the dolphins a boost to adopt new foraging behavior from their associates, it seems quite possible that an abundance of dead shells may have increased learning opportunities for shelling behavior,” says Sonja Wild.