(jpg, 7.07 MB) Female giraffes with calves are more likely to live near Masai settlements – presumably because the young are better protected from predator attacks there. (Image: Christian Kiffner) 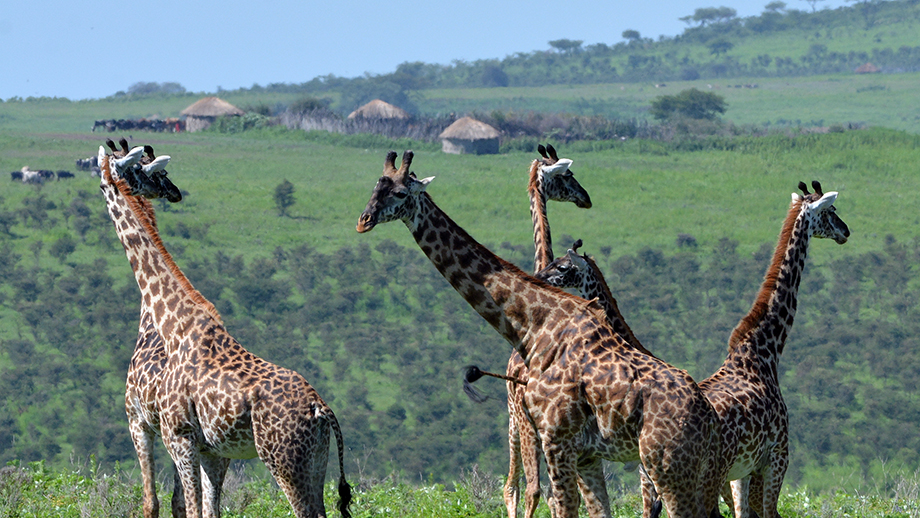 The effects of human presence on the social relationships of wild animals have rarely been studied. Even if the animals are not hunted or killed, increasing contact with humans could have profound indirect impacts. This is because proximity to humans could disturb the animals’ ability to perform at tasks that are important for survival – such as feeding together or rearing young.

Researchers from the Department of Evolutionary Biology and Environmental Studies at the University of Zurich (UZH) have now taken a closer look at this topic by studying Masai giraffes in Tanzania. The study, carried out with researchers from the Max Planck Institute of Animal Behavior, the University of Konstanz and Pennsylvania State University, provides the first robust evidence that human presence affects the social structure in this iconic herbivore.

Mapping the social networks of giraffes

For their study, the scientists first needed to obtain large amounts of data from field research. “Detecting signals of natural versus human-caused influences on social relationships among wild animals is challenging,” says Monica Bond, PhD candidate at the University of Zurich and first author of the study.

Over a period of six years, Bond and her research collaborators collected photographic data spanning 540 adult female Masai giraffes that live in a large, unfenced landscape in the Tarangire Ecosystem of Tanzania – an environment that features varying levels of anthropogenic (human-caused) disturbance. The researchers were able to identify individual giraffes by their unique and unchanging spot patterns. This resulted in one of the largest-scale social networks ever studied in a wild mammal.

The field research sheds new light on the social relationships of giraffes: The female giraffes in Tarangire live in a complex multilevel society, with individuals preferring to associate with some females while avoiding others. These preferences result in discrete social communities of 60 to 90 females with little mixing among the groups, even when these share the same general area. “The study reveals that social structuring is clearly an important feature of female giraffe populations,” says Barbara König, UZH professor and co-author of the study.

The data analysis also revealed that the social networks exhibit signs of disturbance when groups of giraffes are exposed to humans: Giraffes living closer to traditional compounds of indigenous Masai people have weaker relationship strengths and more exclusive social associations.

The researchers suspect that giraffes living near traditional human settlements are more likely to encounter livestock and humans. This potentially causes groups of giraffes to split up, even though they are tolerated by the Masai people. This disruption to the giraffes’ social system – in addition to poaching, loss of habitat and changes in food supply – could be a reason why Masai giraffe populations have declined 50% in recent years.

In other research, the team found that groups of female giraffes with calves were more likely to occur closer to human settlements – possibly because this provides better protection from lions and hyenas. “It seems that female giraffes face a trade-off between maintaining important social bonds and reducing risk to their calves near these traditional settlements,” explains Bond.

Overall, the study’s results suggest that human presence could play an important role in determining the conservation future of this species of giraffe. Moreover, the study’s leading-edge methodology highlights the importance of using the social network approach to reveal otherwise hidden potential causes of population declines.