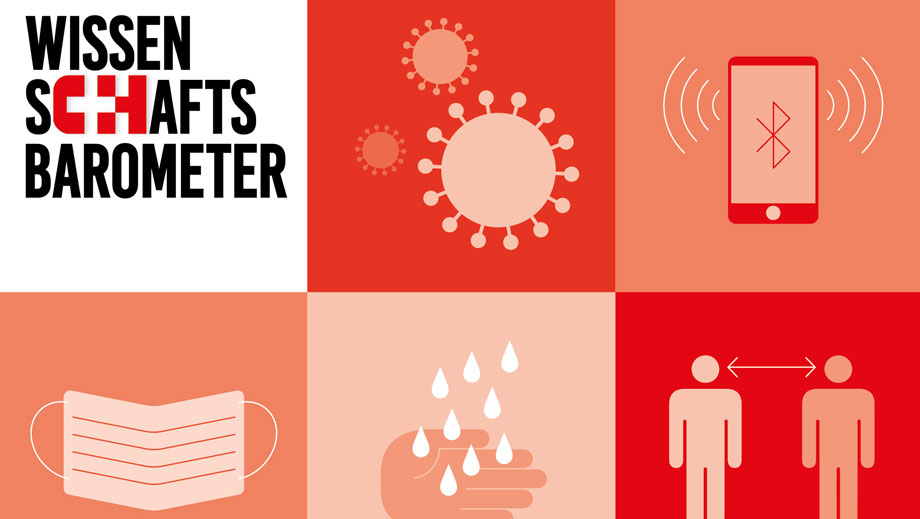 The people of Switzerland’s confidence and trust in science and research have increased during the COVID-19 pandemic. Some 67 percent of the country’s population rate their faith in science as “high” or “very high”, which compares to 56 and 57 percent in previous such surveys in 2019 and 2016 respectively. The Swiss people’s approval of state support for science also remains strong: while 73 percent “strongly” or “very strongly” approved of such support in 2019, some 74 percent of the population remain so convinced at the end of 2020. General interest in science and research has risen, too: while 57 percent of respondents said they were “strongly” or “very strongly” interested in 2019, some 60 percent gave the same answers this year.

“I am delighted at this firm vote of confidence in our scientists, many of whom are currently working seven days a week to help combat COVID-19,” says Claudia Appenzeller, Secretary General of the Swiss Academies of Arts and Sciences, which financed the special survey.

When it comes to the COVID-19 pandemic, the people of Switzerland trust the scientific view. On a scale from 1 (“don’t trust at all”) to 5 (“totally trust”), medical personnel and scientists earned the highest ratings at 4.1 and 3.9 respectively, well ahead of federal and cantonal officials (3.3), politicians (2.7) and journalists (2.6).

Seventy-seven percent of the population also “strongly” or “very strongly” agree that the expertise of scientists is important in slowing the spread of the coronavirus in Switzerland. And a correspondingly large majority of 72 percent “strongly” or “very strongly” feel that political decisions on the pandemic should be based on scientific findings. “In Switzerland, confidence and interest in science are not just consistently high: they’ve actually increased in these coronavirus times,” says Professor Mike S. Schäfer of the University of Zurich, co-head of the Science Barometer Switzerland and its COVID-19 edition. Some 63 percent of the Swiss population also want scientists to be actively involved in political debates on the present pandemic. “They should do so with a single voice, though,” Professor Schäfer adds. “While the majority of the population acknowledge that scientific controversies can be productive, 65 percent also say that they are unsettled when scientists publicly disagree.”

The people of Switzerland accept that controversies may develop within the scientific community, however, and are generally positive about its communications. Over half the survey’s respondents (56 percent) “strongly” or “very strongly” believe that controversies among scientists are valuable because they help to ensure that the right research results will prevail. Only 32 percent felt that scientists were unable to communicate about the present crisis in an understandable way.

A minority with more controversial views

The results of the COVID-19 edition of the Science Barometer Switzerland also reveal more skeptical attitudes, however, towards the current pandemic. Twenty-seven percent of respondents “strongly” or “very strongly” believe that the pandemic is being blown up into a bigger issue than it is. And 21 percent believe that the numbers of COVID-19 deaths have been intentionally inflated by the authorities.

More extreme views still are rare but held: 16 percent believe that the pandemic has been planned by powerful individuals; and nine percent doubt that there is genuine evidence that the novel coronavirus exists. “While the majority of the Swiss population do not believe in coronavirus conspiracies, there is a small group of people who doubt the scientific evidence,” explains Professor Julia Metag of the University of Münster, co-head of the Science Barometer Switzerland and its COVID-19 edition. “And scientists need to bear this in mind in their pandemic communications.”

In 2016 and 2019, it was through television and the internet that the people of Switzerland came most frequently into contact with science and research. In the present pandemic times, television is a particularly popular source of coronavirus information, with the internet and conversations with family, friends and colleagues cited as further means of such engagements with the issues concerned.

The latest Science Barometer Switzerland also assessed how the country’s inhabitants view the media’s reporting on the coronavirus phenomenon. “Comprehensive”, “informative” and “understandable” earned particular mentions here. But 43 percent of respondents also described such reporting as “exaggerated” and “annoying”.

The Science Barometer Switzerland and the latest COVID-19 edition

The Science Barometer Switzerland monitors the attitudes of the Swiss population towards science and research and how they inform themselves on the issues concerned. The long-term project was launched in 2016 by Prof. Dr. Mike S. Schäferof the Department of Communication and Media Research (IKMZ) at the University of Zurich and Prof. Dr. Julia Metag of the Department of Communication at the University of Münster, Germany.

The latest special Science Barometer Switzerland survey on the COVID-19 issue was financed by the Swiss Academies of Arts and Sciences, and was conducted in November 2020 in the form of an online representative survey of Swiss residents aged 15 or over. For further project information, visit www.wissenschaftsbarometer.ch.