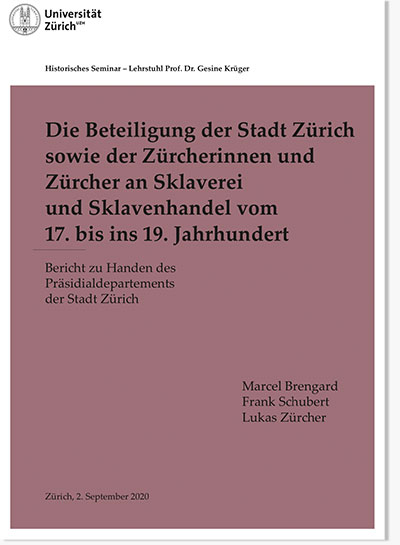 (jpg, 3.35 MB) The slave ship "Diligenté" with 600 slaves on board. (Collection of the Smithsonian National Museum of African American History and Culture) 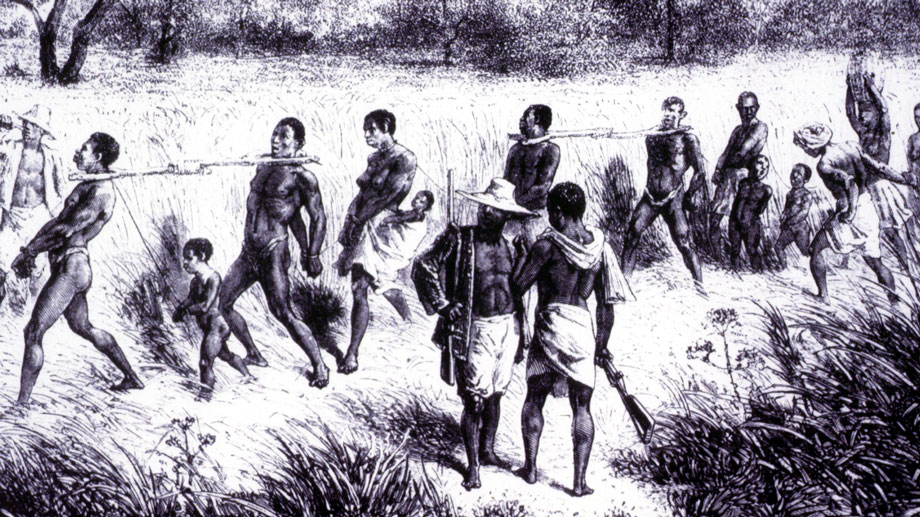 Captives were marched, often in yokes, from the inland areas of Africa to the coast for sale to Europeans. ("A Coffle", Slavery Images: A Visual Record of the African Slave Trade and Slave Life in the Early African Diaspora, accessed September 23, 2020, http://slaveryimages.org/s/slaveryimages/item/420)

From the 16th to 19th century, slavery and slave trade were central institutions of the modern era. Some 12.5 million people were enslaved and deported from Africa across the Atlantic alone. Historians Marcel Brengard, Frank Schubert and Lukas Zürcher at the chair of Prof. Gesine Krüger have now investigated the role of the city in this troubling part of history on behalf of the city of Zurich.

Their study shows that, like other towns, Zurich was involved in financing the transatlantic slave trade. In the 18th century, for example, Zurich purchased shares in the South Sea Company, a British company that actively traded slaves. During the time Zurich held these shares, the South Sea Company deported 8,636 African people across the Atlantic to America. In the same period, the company also shipped 27,858 slaves from predominantly British islands such as Jamaica and Barbados to the Spanish colonies. “The city of Zurich was therefore financially involved in the deportation of a total of 36,494 Africans,” says study author Frank Schubert.

Furthermore, the city of Zurich was invested in slave trade through the semi-governmental Zinskommission Leu. The financial institution purchased Danish government bonds, which were used to fund slave trade in the former Danish West Indies. Several thousand slaves worked there at the time, and one of the islands, St. Thomas, developed into a hub for slave trade. “Through these business ties, capital from Zurich was used to fund a small but not insignificant part of slave trade and colonial plantation and slavery activities,” concludes Frank Schubert.

Besides these direct investment, the Zurich textile industry also held structural ties to slavery. For example, the indienne fabrics manufactured in Zurich in the 18th century were used as a key trading commodity for purchasing slaves in West Africa. Moreover, in the 19th century the Zurich cotton industry sourced most of its materials from slave plantations in the south of the US. Some of the industrial and commercial enterprises to emerge from this sector went on to take up leading positions in 20th century Swiss economy and played a significant part in contributing to Switzerland’s wealth.

Involvement of the Escher family

The Escher family is the most well-known example from a fairly large number of Zurich families that held ties to the colonial world and were often also involved in slavery in a variety of ways. Alfred Escher, one of the founding fathers of modern-day Switzerland, did not own any plantations or slaves himself. However, his grandfather Hans Caspar Escher funded at least one slave ship, his father Heinrich Escher was a successful trader and investor in the US, and his uncle Friedrich Ludwig Escher ran the Buen Retiro coffee plantation in Cuba with over 80 slaves. The Escher family was thus linked to slavery in various ways. Despite this, Alfred Escher went to court to fight reports in the media that the Escher family was involved in the slave trade, at a time when slavery was no longer seen as morally acceptable.

In light of the study’s findings and given the ongoing discussion, in Switzerland as well as abroad, on historical monuments and the remembrance of slavery, the study authors suggest that the city of Zurich commemorate its involvement in slavery and slave trade in an appropriate manner. Corine Mauch, the mayor of Zurich, shares this opinion: “We mustn’t close our eyes to the city of Zurich’s colonial past. The city will now assess how to publicly commemorate this topic in a contemporary way.”