(jpg, 1.06 MB) IrtAB (purple/turquoise/blue) sits in the inner membrane of M. tuberculosis and imports iron-loaded mycobactin (yellow/orange) from the host cell into the bacterial cell, where iron is released. (Image: Imre Gonda, UZH) 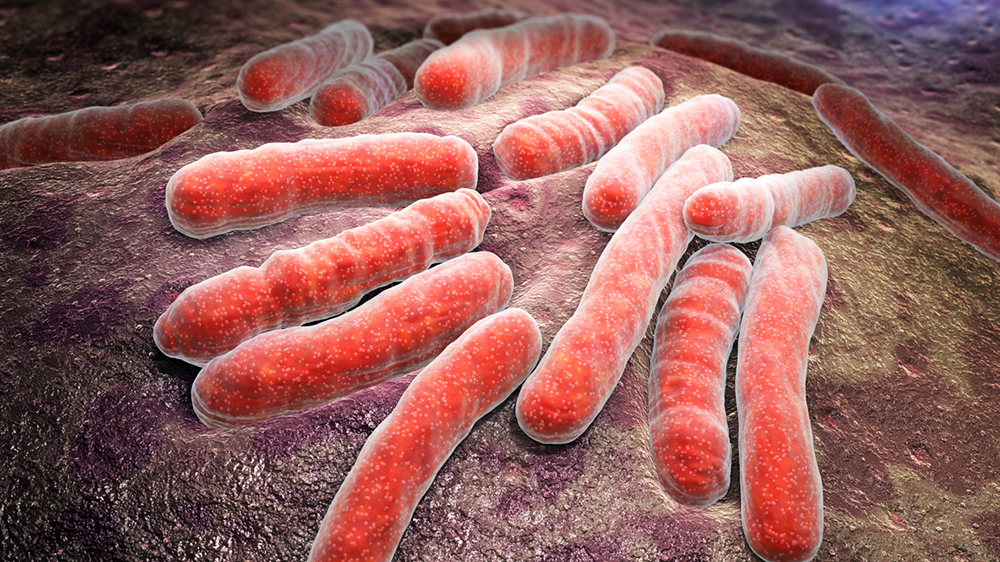 One of the most devastating pathogens that lives inside human cells is Mycobacterium tuberculosis, the bacillus that causes tuberculosis. According to the World Health Organization, 1.5 million people died in 2019 from this disease that generally affects the lungs. The rise of multidrug resistant M. tuberculosis strains, which are resistant to many of the most effective anti-tuberculosis drugs, is particularly worrying. In other words, novel drugs to treat tuberculosis are urgently needed.

All living organisms, including pathogens, need iron to survive. When a human cell is infected by pathogens like M. tuberculosis, it reduces the iron concentration to a minimum and thereby tries to starve the invader. The tuberculosis bacteria, in turn, start to release small molecules called mycobactins. These can bind free iron extremely well and thus steel it from the host cell. The iron captured by mycobactin is then transported into the bacteria by a protein named IrtAB.

A team of researchers led by Markus Seeger, professor at the Institute of Medical Microbiology of the University of Zurich (UZH), has now analyzed in detail the protein responsible for transporting iron from the infected host cell into the bacteria. “The transport protein, which is located in the bacterial membrane, is essential for the survival of the pathogens. If IrtAB is absent or not functioning, M. tuberculosis can no longer reproduce inside the human cell”, says Seeger.

Iron transport protein works in the opposite direction

Using a combination of cryo-electron microscopy and X-ray crystallography, the researchers solved for the first time a high-resolution structure of the transport protein IrtAB. This analysis was done in collaboration with Ohad Medalia, professor at the Department of Biochemistry of UZH. According to its spatial structure, IrtAB belongs to the so-called ABC exporters, which are typically involved in the efflux of molecules out of the bacterial cell. “However, we were able to show that IrtAB in fact imports mycobactins into M. tuberculosis. It therefore transports molecules in the opposite direction than expected,” says Markus Seeger.

Together with scientists from the University of Texas, USA, the research team identified an additional peculiarity of the transport protein IrtAB: It can modify the iron bound to mycobactin after it is imported into the bacteria. The iron is thus released inside the cell and the empty mycobactin can be recycled.

Inhibiting the iron transport could lead to new tuberculosis drugs

“IrtAB is a potential drug target, because its deletion renders M. tuberculosis inactive and incapable of infection. With our structural and functional elucidation of IrtAB, we opened avenues to develop novel tuberculosis drugs that inhibit the iron transport into the bacteria”, Seeger concludes. “In view of Covid-19, a disease that also affects the lungs, tuberculosis will likely play a more important role again in the future. It is quite conceivable that patients weakened by Covid-19 will show increased infection rates with tuberculosis,” he adds.

This research project was largely funded by the ERC Consolidator Grant 2017 of the European Research Council for the project “Discovery and molecular investigation of mycobacterial transporters responsible for iron acquisition” (MycoRailway) led by Markus Seeger.