UBS Center for Economics in Society 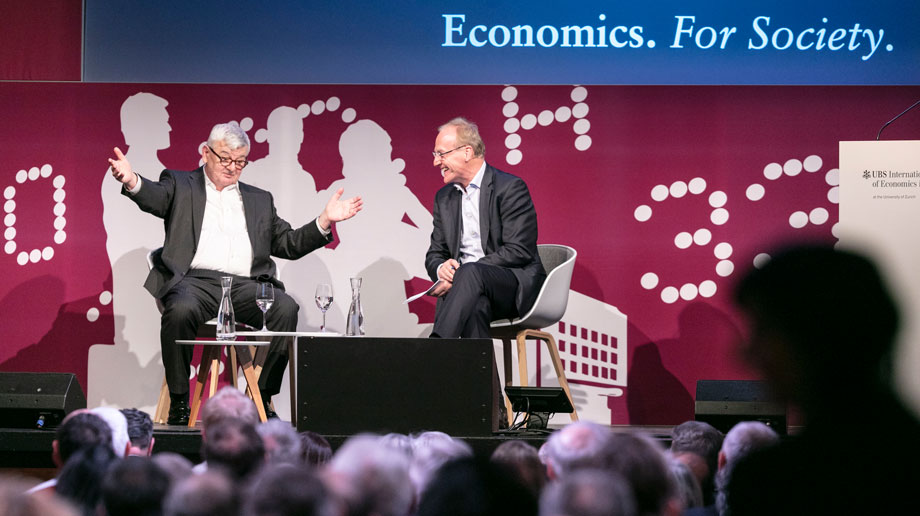 Ernst Fehr talks to Joschka Fischer, former Foreign Minister of Germany, at a public event of the UBS Center for Economics in Society.

The UBS Center for Economics in Society (UBS Center) was established in 2012 as an Associated Institute at the University of Zurich. This was made possible thanks to a donation of 100 million Swiss francs from UBS on the occasion of its 150-year anniversary. UBS has now decided to extend its engagement for an additional 10 years with a new donation of approximately 25 million Swiss francs, enabling the UBS Center to build on its past achievements. “We continue to take our social responsibility seriously, even in difficult times,” says UBS Group Chief Executive Officer Sergio Ermotti. “Our new contribution is a clear commitment to Switzerland as a leading location for education and research.” “The University of Zurich warmly welcomes the extension of UBS’s commitment. The UBS Center plays a very important role in the success of the Department of Economics,” says Gabriele Siegert, UZH President ad interim.

The University of Zurich has become one of the leading universities in Europe in the field of economics – and this is in large part due to the UBS Center, which has been able to establish itself in Switzerland as a driving force and a platform for dialogue between scientists, policy-makers and society. The reputation of the UBS Center extends far beyond Swiss borders, as Ernst Fehr, professor of economics at UZH and director of the UBS Center, emphasizes, “Thanks to the UBS Center, the Department of Economics has succeeded in attracting leading international researchers and excellent doctoral candidates.” This has set in motion a self-reinforcing process, offering a unique opportunity to advance towards the internationally leading economics departments. According to Fehr, the field of economics is presently dominated by US universities. “This must change if Europe’s voice, values and opinions are to be heard in the global discourse. The continuation of the cooperation between the UBS Foundation and the UZH helps us reach this goal.”

Thanks to the anniversary donation, seven new professorships at the Department of Economics have been established since 2012. With the new donation, the UBS Foundation will have the opportunity to fund an additional professorship and its scholarship program for doctoral candidates at the Zurich Graduate School of Economics. The UBS Center will continue to focus on the exchange between science, politics and society.

The extension of the engagement will enable the Department of Economics to continue to follow its ambitious goal of advancing towards the world’s leading institutions for economics. Several external experts, in particular Nobel laureates George Akerlof and Oliver Hart as well as David Laibson (Harvard) attested last year that this goal is quite realistic. In their reports, they state that the UBS Center has become an international brand name and that it exemplifies how output, promotion of young talent, and public relations at universities can be improved. These positive evaluations were one of many reasons for the parties to extend their engagement for another 10 years.

Ernst Fehr will continue to be director of the Center. The Center will also retain its strongly staffed advisory board consisting of renowned economists, several of whom are Nobel laureates.