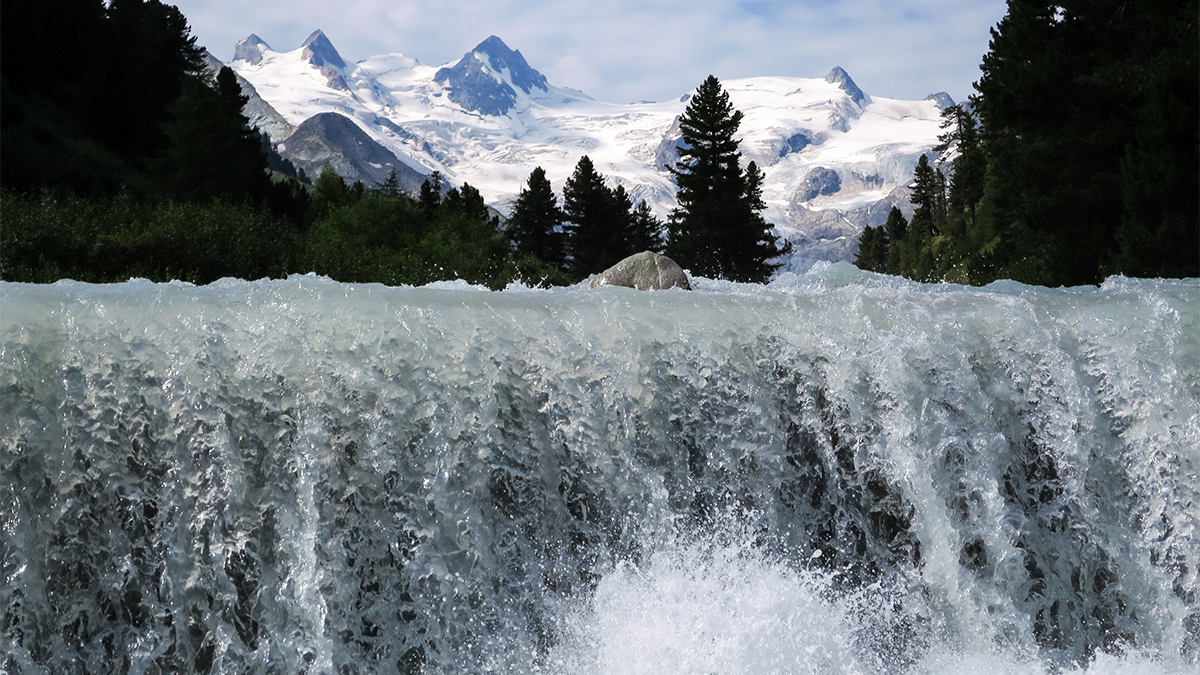 The Rosegbach River in the Upper Engadine, Switzerland, is part of the Danube River basin where roughly one third of the 46 million people living downstream strongly depend on water resources from mountain areas. (Picture: D. Viviroli)

Water is a key resource for the 21st century, and many lowland regions all over the world depend on water resources originating in mountain regions, not least when it comes to irrigating agricultural land. A study led by the University of Zurich has now quantified this dependence for the first time by comparing water supply and consumption in the world’s lowland areas with runoff contributions from the mountains. Based on a high-resolution global model, the study provides detailed information on the dependence on mountain water resources around the globe. The comprehensive analyses were carried out using a regular grid and then compared for every river catchment area of at least 10,000 km2. This allowed for highly differentiated insights into regional characteristics and differences.

“Until now, research has focused mainly on river basins that originate in High Mountain Asia,” says Daniel Viviroli from the Department of Geography at the University of Zurich, first author of the study. “But in many other regions, irrigated agriculture is heavily dependent on water from mountainous areas, such as in the Middle East and North Africa, as well as parts of North America, South America and Australia.”

This dependence has increased strongly since the 1960s – despite more efficient water use and thus declining per-capita water consumption. Whereas only 7 percent of the lowland population used to be strongly dependent on contributions from mountain areas at that time, this figure is projected to rise to 24 percent by mid-21st century. This corresponds to about 1.5 billion people in lowland areas. Particular focus is on catchment areas such as those of the Ganges-Brahmaputra-Meghna, Yangtze and Indus rivers in Asia, the Nile and Niger in Africa, the Euphrates and Tigris in the Middle East as well as the Colorado River in North America. For their analyses, the researchers assumed a middle-of-the-road scenario in terms of population growth as well as technological, economic and social development.

“Ensuring the function of mountains as ‘water towers’ should be a major concern of the world’s lowland populations,” says Viviroli. Sustainable development of mountain regions is therefore essential, for example by preventing agricultural overuse and ensuring the functioning of ecosystems, the researchers say. In addition, climate action is of paramount importance: Due to the rising temperatures, meltwater peaks from snow-covered mountain regions sometimes already occur several weeks earlier and are thus not as useful for summer agriculture. Adjustments in water management will be necessary, and possibly also new infrastructure such as dams and water transfers.

“However, technical solutions go hand in hand with major ecological damage, and some rivers, such as the Indus, have little potential for expansion,” says Viviroli. For the future, it will be crucial that lowland and mountain regions work closely together despite political, cultural, social and economic differences.

Many regions are dependent on water from mountainous areas.