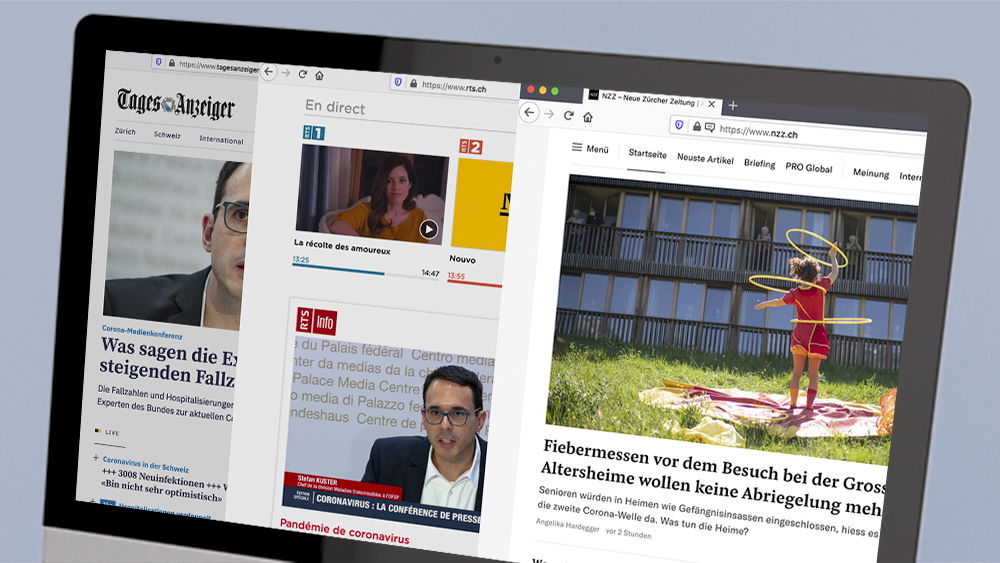 Media reports are covering a smaller and smaller range of topics and geographical areas. (Image: UZH)

The Research Center for the Public Sphere and Society (fög) examines the developments in the Swiss media landscape  since 2010. No other event in recent years has had as profound an effect on Swiss media as the coronavirus pandemic, whose consequences are evident across all quality dimensions that were analyzed for the yearbook.

The yearbook shows that in times of uncertainty, people increasingly return to traditional news media – also through social media channels – and the need for evidence-based and reliable information grows. This increased usage reflects the relatively high trust that people, regardless of their age, place in news media. For example, 44% of Swiss people state that they fully or mostly trust the news media, while only 19% do so when it comes to social media. In addition, a recent study by the fög showed that the quality of media coverage about the pandemic has been relatively high. Yet despite this encouraging development, the media have not been able to compensate lost income from advertising through contributions from readers. “The coronavirus crisis has further exacerbated the financial situation of news journalism, which has been precarious for some time,” says Mark Eisenegger, director of the fög.

During the pandemic, increased media consumption was also observed among young people, albeit only for a short time. The so-called “news-deprived”, who are mostly young adults who consume news of mostly inferior quality and only sporadically, make up the largest media user group with 37%. For the 2020 yearbook, the researchers took a closer look at the usage habits of young adults. They found that this group of people is interested in news if certain circumstances are met. Topics that galvanize people into action, such as the #MeToo or Fridays for Future movements, met with interest if the relevant information was a fit with their own identity and community. They prefer news that is presented in an appealing way (e.g. audiovisual), easy to understand and compatible with their everyday routines. However, members of this media usage group are only willing to pay for news if content from different media would be offered on a platform for a flat fee.

The coronavirus crisis has revealed the media’s great reliance on experts. This is hardly surprising, since the status of science reporting in Switzerland is quite low and makes up a mere 2.1% of all media articles. While the percentage of reports focusing on science has remained stable over the last five years, commentary and contextualizing has more than halved since 2015 and dropped to approx. 14% in 2019 (down from 36% in 2015). According to Mark Eisenegger, this is problematic, “since conveying and commenting on scientific findings is very important for society – not just since the pandemic.”

More than 40% of politics reporting shared

The yearbook examines the development of media quality every year based on four quality dimensions. As in past years, the most significant decline was observed in the diversity dimension. Media reports are covering a smaller and smaller range of topics and geographical areas. Diversity is also dropping within the media market overall, because outlets are increasingly sharing their content. The percentage of shared media reports grew from 10% in 2017 to 21% in 2019. This is particularly striking when it comes to reports covering domestic politics, which at 41% featured a high rate of shared content in 2019 (up from 21% in 2017).

The coronavirus pandemic has further accelerated structural changes in the media landscape. The diminishing advertising revenues mean that payment models are becoming increasingly important. However, the willingness to pay remains low among Swiss people in 2020, with only 13% prepared to pay for news online (2016: 10%). The largest rise in people’s willingness to pay was observed among young women aged 18 to 24, at currently 19% (compared to 7% in 2016). This raises hope of a emerging generation that will once again be willing to pay for news on the internet. However, this will require content that is geared to specific target groups as well as new payment models that meet the needs of the younger generation, for example through a kind of “Spotify for journalism”. “The search for the business model of the future will continue,” concludes Mark Eisenegger. “Greater direct subsidies for the media are thus still needed, both for print and online media.”

The Yearbook Quality of the Media as well as further studies are available online as PDFs at www.foeg.uzh.ch