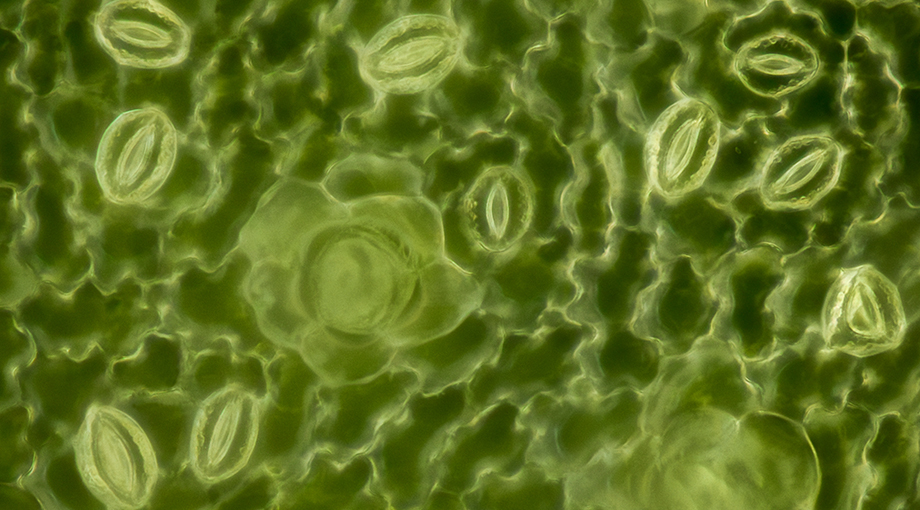 Stomata, tiny pores on the leaf, enable gas exchange with the environment and batten down the hatches when they encounter potentially pathogenic microbes. (Image: istock.com/ConstantinCornel)

Each plant leaf has hundreds of tiny pores that enable the exchange of gases with the environment. By inhaling CO2 and releasing oxygen and water vapor, these stomata are essential for photosynthesis, the survival of plants – and ultimately all life on this planet. The size of the openings is dynamically controlled to allow plants to adapt to changing conditions like sunlight, drought and rain. The opening and closing is facilitated through the swelling and shrinking of two so-called guard cells that form a ring-like border around the pore.

Plants can defend themselves

Plant researchers have long known that leaves also batten down the hatches when they encounter potentially pathogenic microbes. This reaction is part of the innate plant immune system: Receptors at the surface of plant cells recognize typical structures of microbes such as parts of bacterial flagellae. This leads to a series of reactions that ultimately block microbe entry and multiplication. One of these responses is stomatal closing, which is equivalent to closing the gates to the pathogens.

Long search for a missing link

However, the mechanism behind this microbe-induced closure of stomata remained largely unexplained, although it was shown that a rapid influx of calcium ions into the guard cells triggered the reaction. "The identity of the channels that mediate this rapid calcium movement was still unknown and has vexed researchers for a long time," says Cyril Zipfel, professor of molecular and cellular plant physiology at the University of Zurich and senior group leader at the Sainsbury Laboratory in Norwich, UK. After six years of research, he has now published a study that closes this gap and identifies the relevant calcium channel in the model plant Arabidopsis. As well as Zipfel’s team, several international research groups contributed to the results.

The decisive clue was that the identified channel protein, OSCA1.3 – with a hitherto unknown function – was modified by an important component of the plant immune system. This modification leads to the opening of the OSCA1.3 channel, the influx of calcium ions into the guard cells and the closing of the stomata. Zipfel’s team could show that this reaction was specifically initiated when Arabidopsis plants were brought into contact with parts of bacterial flagellae – one of the microbial triggers of the plant immune system.

The researchers confirmed this result by introducing several genetic mutations that abolished the function of the OSCA1.3 calcium channel. In these mutated plants, the microbial trigger did not lead to the closing of the pores. Further experiments showed that the channel is also not activated by drought and salinity, other environmental factors that induce the closure of stomata. "This finding reveals the first plant calcium channel with a role in stomatal closure," says Zipfel. "Interestingly, this channel seems specific to plant immunity." He therefore speculates that other plant calcium channels from the same family may respond specifically to other stress factors like drought. This will be the topic of future research.

"Obviously, this channel is involved in an important immune response in plants," says Zipfel. "These findings therefore have the potential to help with the engineering of pathogen-resistant crops." Under real and significant threat by pathogens the plants could then close the gates that would normally allow dangerous microbes to enter into their tissues.