(jpg, 666 kB) Peritoneal dialysis can be done at home with only minimal medical and technical assistance. (Image: Hugues Depasse) 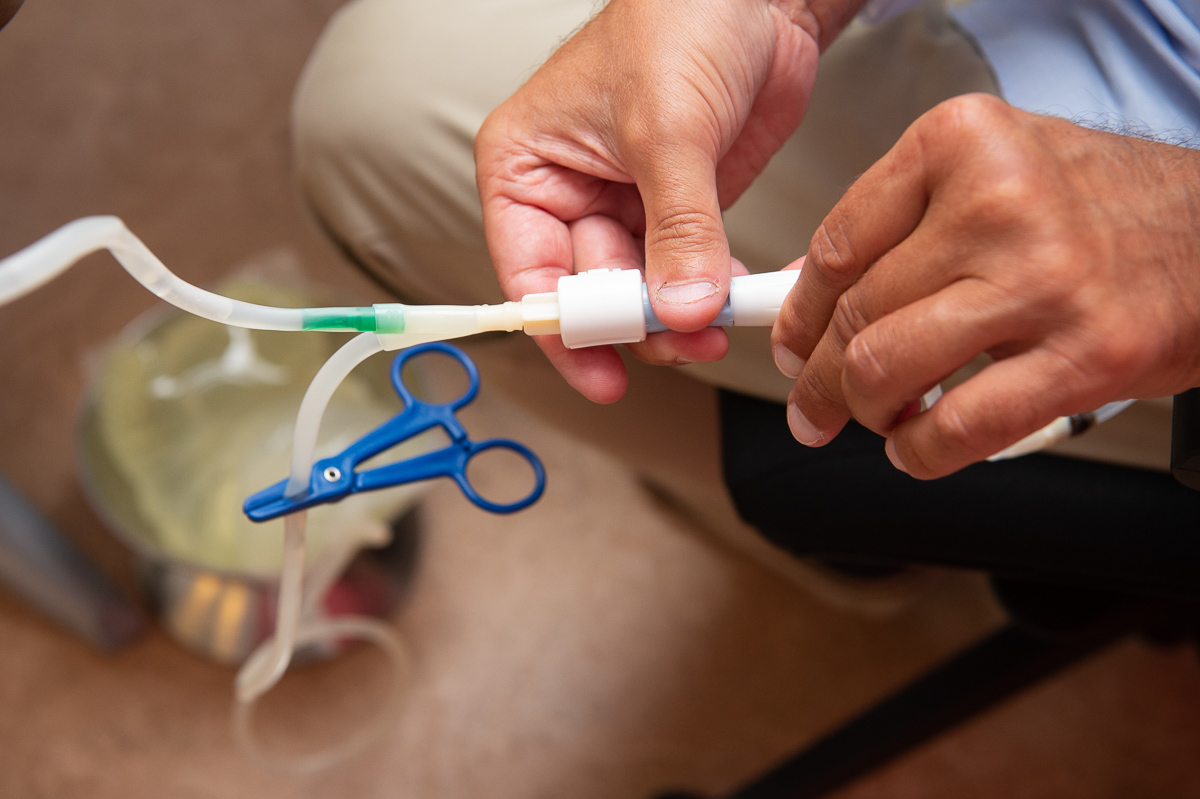 Every day, the human kidneys clean about 1,500 liters of blood by producing approximately 1–2 liters of urine. Thereby, the body gets rid of excess water and toxic waste products of the metabolism or also drugs and maintains the balance of water and minerals in the tissues. While waiting for kidney transplantation, patients with chronic kidney failure must be treated regularly with dialysis that cleanses the body of fluid and deleterious substances. Peritoneal dialysis, which can be done at home with only minimal medical and technical support, is gaining popularity across the world. Today, kidney failure is a growing medical concern, concerning up to 10% of individuals globally.

An international research team led by the University of Zurich (UZH) has now identified a common variant in the AQP1 gene coding for the water channel called Aquaporin-1 that has a significant effect on treatment efficacy and patient survival on dialysis. "The identification of this common genetic factor regulating the expression of Aquaporin-1, which is associated with a higher risk of death and technique failure, provides a big step for precision medicine in dialysis," says study coordinator and last author Olivier Devuyst from the UZH Department of Physiology. "The gene variant is driving the outcome of peritoneal dialysis and the choice of treatment modalities, which is very important for the care and outcome of patients with kidney failure," he adds.

The efficiency of dialysis depends on how well it removes excess of water, restores normal body fluid status, and clears waste substances. Peritoneal dialysis is based on osmosis: the introduction of an osmotic solution in the peritoneal cavity drives water transport preferentially through the Aquaporin-1 channels, which constitute the body's plumbing system. Previous studies by Devuyst' group showed that Aquaporin-1 is abundant in endothelial cells lining capillaries of the peritoneum, where it mediates fast osmotic water transport across cell membranes and up to half of the water removal during dialysis, a process named ultrafiltration.

To test which effects gene variants for Aquaporin-1 have on ultrafiltration and outcome in dialyses, the researchers followed 1,851 patients of diverse ethnic origins for several years and analyzed their data. Using a variety of techniques ranging from human genetics to mouse models, modeling and cellular studies, the team was able to show that patients carrying a common variant in the Aquaporin-1 gene have a lower level of this protein in their tissues. Hence, their basic capacity to move water across cell membranes is decreased. Devuyst adds: “Our research shows that relatively common genetic variants – the AQP1 variant is detected in about 30% of the population – may affect fundamental processes, but are only exposed in special circumstances like the dialysis here”.

Carrying the Aquaporin-1 variant is deleterious in patients treated by peritoneal dialysis, because the lower expression of water channels impairs a full removal of water by the treatment. This situation causes an overload of water and an increased risk of death due to various complications. In fact, peritoneal dialysis patients carrying the variant have a 70% higher risk to die or to be transferred to hemodialysis in hospitals compared to patients not carrying the defective gene. The team consisting of researchers and clinicians from six different countries present a way to circumvent this problem: "It is possible to overcome the genetic defect by using specific osmotic solutions that attract water independently of aquaporins – so-called colloid osmotic agents – instead of glucose," says Olivier Devuyst.

This study was funded by the Swiss National Science Foundation (SNSF), the National Centre of Competence in Research "Kidney Control of Homeostasis" (Kidney.CH) and the University Research Priority Program "ITINERARE" of the University of Zurich.