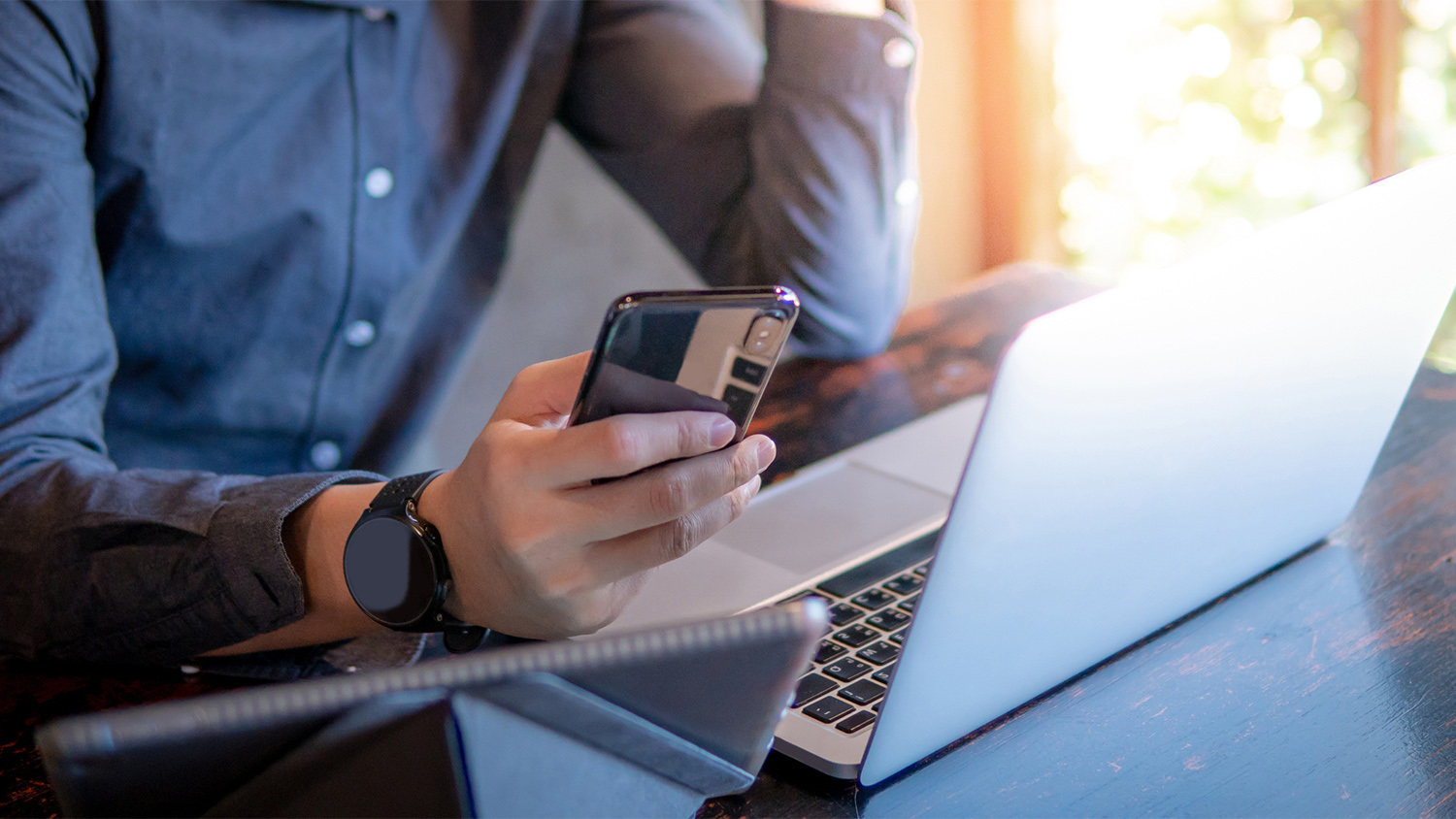 Many Swiss internet users discovered the advantages of working from home and of using cashless payments during the pandemic. (Image: Istock.com/Zephyr18)

As a result of the Covid-19 pandemic, everyday life in Switzerland has been severely restricted since March 2020 and many activities have increasingly shifted to digital spaces. This forced boost for digitalization is most pronounced in the area of remote working: Whereas before the pandemic, employed internet users spent just under 20 percent of their employed hours working from home, during the pandemic it was more than 60 percent. Post-pandemic, they wish to work from home about two days of the week.

"There are clear differences between the digitalization advances forced by Covid-19 in the short term and what is desired in the long term," emphasizes Michael Latzer, professor of media change and innovation at the University of Zurich: "Many Swiss internet users discovered the advantages of working from home and of using cashless payments during the pandemic, but the limits of digital alternatives also became apparent, particularly in personal relationships." For example, the share of social gatherings taking place online increased from 9 to 25 percent because of the pandemic; in the long term, the ideal share is 12 percent.

Today, nearly everyone is online, 86 percent also use mobile internet

The survey, conducted by Michael Latzer and his team for the sixth time since 2011, shows that 95 percent of the Swiss population use the internet in 2021. Among those under 70, it is almost 100 percent. 86 percent of the total population also use mobile internet in 2021, which is more than four times as many as ten years ago. Internet usage time doubled between 2011 and 2019 to 3.5 hours and experienced another significant increase during the corona crisis, reaching 4.5 hours a day in 2021. Nevertheless, there was only a small increase in concerns about internet use: In 2021, only slightly more internet users feel that they spend too much time online (29 percent) than before the pandemic (25 percent).

The number of non-users in Switzerland is around 330,000 (compared to 1.5 million ten years ago). The everyday digital life of the online population has changed significantly in the last decade: In 2021, 84 percent shop online (2011: 65 percent), 80 percent check facts online (2011: 60 percent) and 79 percent use online banking (2011: 59 percent). Internet calls (82 percent) and messaging (93 percent) are now the norm, whereas ten years ago they were used by less than half. The internet has been the most important source of information and entertainment compared to other media since 2019.

Although the over-70s have made the biggest leap in internet use since 2019, a quarter still does not use the internet in 2021 (2019: 40 percent). Their most important source of information remains TV. Only a third of the 70+ generation feels included in the information society (31 percent); among 20- to 29-year-olds, the number is 88 percent. The Covid-19-related advances in digitalization are also much weaker here: Online shopping increased by only three percentage points during the pandemic (from 11 percent to 14 percent).

By comparison, 20-to-49-year-olds ordered more than 40 percent of all products online during the pandemic, a short-term boost of 11 percentage points. "Between the 70+ generation and the rest, the digital divide is deepening in both usage of and attitudes toward the internet," says Michael Latzer. For example, almost twice as many in this age group (37 percent) would like to see more internet regulation by the government than among those under 70 (20 percent). 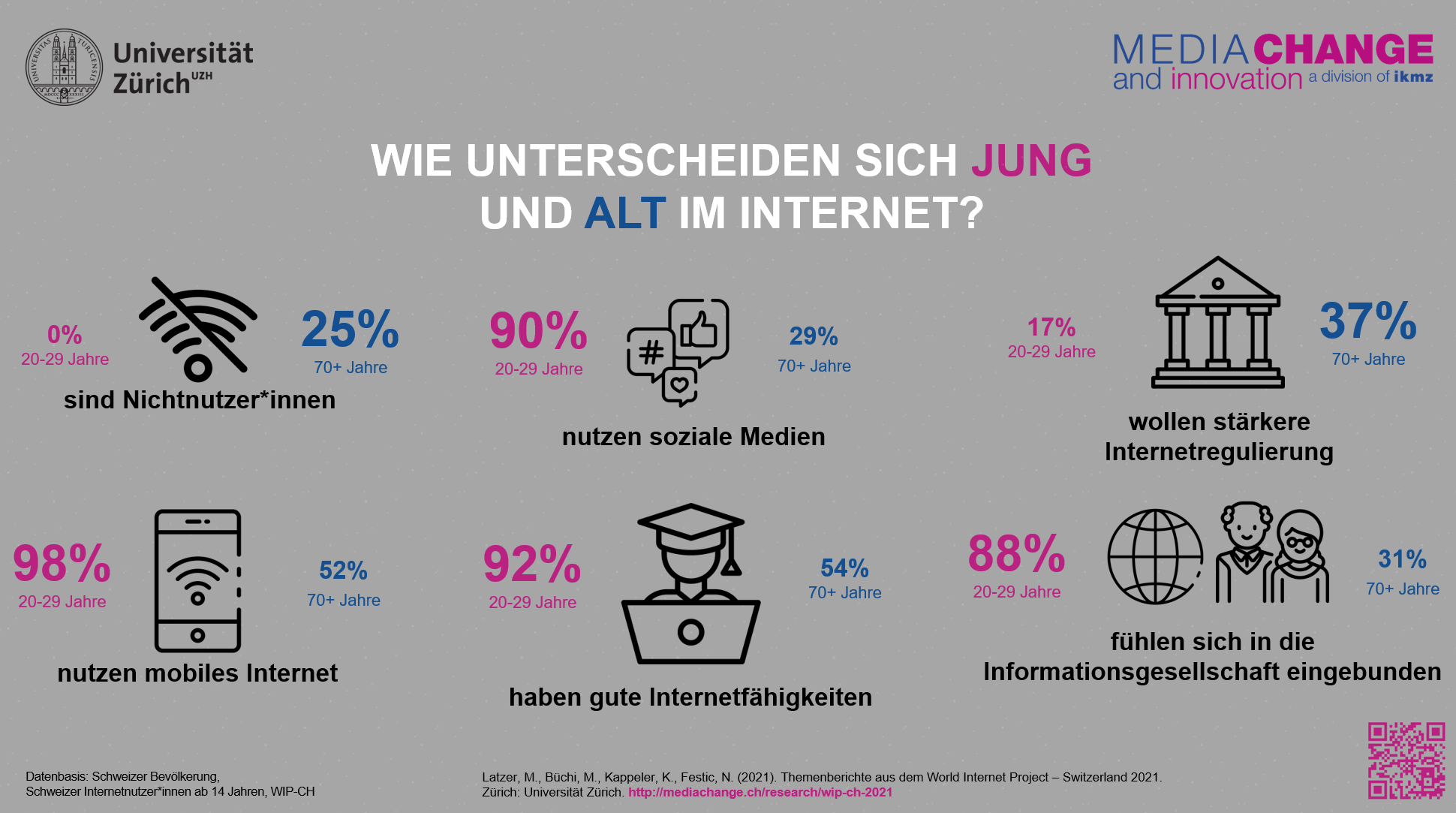 Between the 70+ generation and the rest, the digital divide is deepening in both usage of and attitudes toward the internet. (Image: ikmz/media change and innovation)

The World Internet Project (WIP) is a comparative longitudinal study that records the diffusion and use of the internet in 30 countries in an international comparison and analyzes social, political, and economic implications of the development of the internet.

The Swiss WIP project has been carried out since 2011 by the Media Change & Innovation Division in the Institute of Communication and Media Research (IKMZ) at the University of Zurich under the leadership of Michael Latzer. It is based on a representative telephone survey of 1,120 persons aged 14 or over and was carried out by DemoSCOPE in May/June 2021. The 2021 project team members include Moritz Büchi, Kiran Kappeler and Noemi Festic.

The special report on Covid-19 and all topic reports are available for download on: