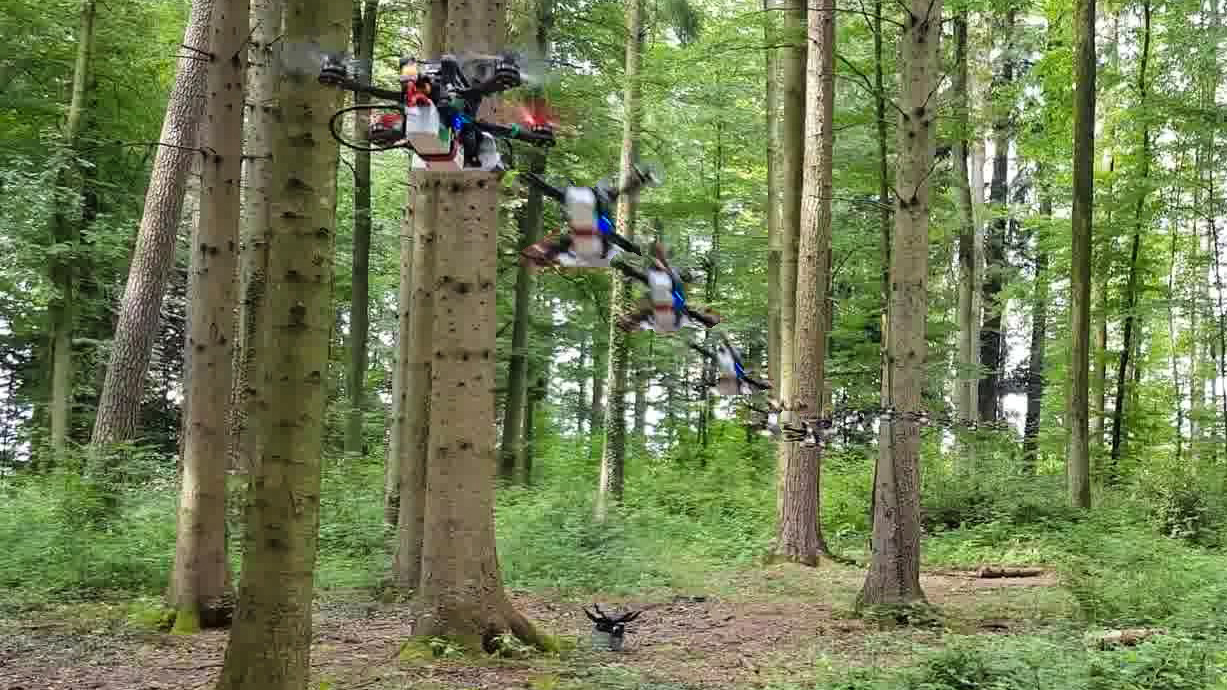 The autonomous drone navigates independently through the forest at 40 km/h. (Image: UZH)

When it comes to exploring complex and unknown environments such as forests, buildings or caves, drones are hard to beat. They are fast, agile and small, and they can carry sensors and payloads virtually everywhere. However, autonomous drones can hardly find their way through an unknown environment without a map. For the moment, expert human pilots are needed to release the full potential of drones.

“To master autonomous agile flight, you need to understand the environment in a split second to fly the drone along collision-free paths,” says Davide Scaramuzza, who leads the Robotics and Perception Group at the University of Zurich. “This is very difficult both for humans and for machines. Expert human pilots can reach this level after years of perseverance and training. But machines still struggle.”

In a new study, Scaramuzza and his team have trained an autonomous quadrotor to fly through previously unseen environments such as forests, buildings, ruins and trains, keeping speeds of up to 40 km/h and without crashing into trees, walls or other obstacles. All this was achieved relying only on the quadrotor’s on-board cameras and computation.

The drone’s neural network learned to fly by watching a sort of “simulated expert” – an algorithm that flew a computer-generated drone through a simulated environment full of complex obstacles. At all times, the algorithm had complete information on the state of the quadrotor and readings from its sensors, and could rely on enough time and computational power to always find the best trajectory.

Such a “simulated expert” could not be used outside of simulation, but its data were used to teach the neural network how to predict the best trajectory based only on the data from the sensors. This is a considerable advantage over existing systems, which first use sensor data to create a map of the environment and then plan trajectories within the map – two steps that require time and make it impossible to fly at high-speeds.

No exact replica of the real world needed

After being trained in simulation, the system was tested in the real world, where it was able to fly in a variety of environments without collisions at speeds of up to 40 km/h. “While humans require years to train, the AI, leveraging high-performance simulators, can reach comparable navigation abilities much faster, basically overnight,” says Antonio Loquercio, a PhD student and co-author of the paper. “Interestingly these simulators do not need to be an exact replica of the real world. If using the right approach, even simplistic simulators are sufficient,” adds Elia Kaufmann, another PhD student and co-author.

The applications are not limited to quadrotors. The researchers explain that the same approach could be useful for improving the performance of autonomous cars, or could even open the door to a new way of training AI systems for operations in domains where collecting data is difficult or impossible, for example on other planets.

According to the researchers, the next steps will be to make the drone improve from experience, as well as to develop faster sensors that can provide more information about the environment in a smaller amount of time – thus allowing drones to fly safely even at speeds above 40 km/h.