Center of Competence for Gerontology & URPP Dynamics of Healthy Aging

“I got to know my wife on the football pitch. I was the goalie for FC Wettingen.”

“As a child I was outdoors in nature a lot. I have very fond memories of the river Aa in Engelberg, it always helped me fall asleep.”

Remembered sound: Sound of a stream

(jpg, 2.09 MB) Wencke Myhre's song 'Er steht im Tor' brings back memories for Albin Spörri who was once a goalie in a club. (Image: © Jos Schmid) 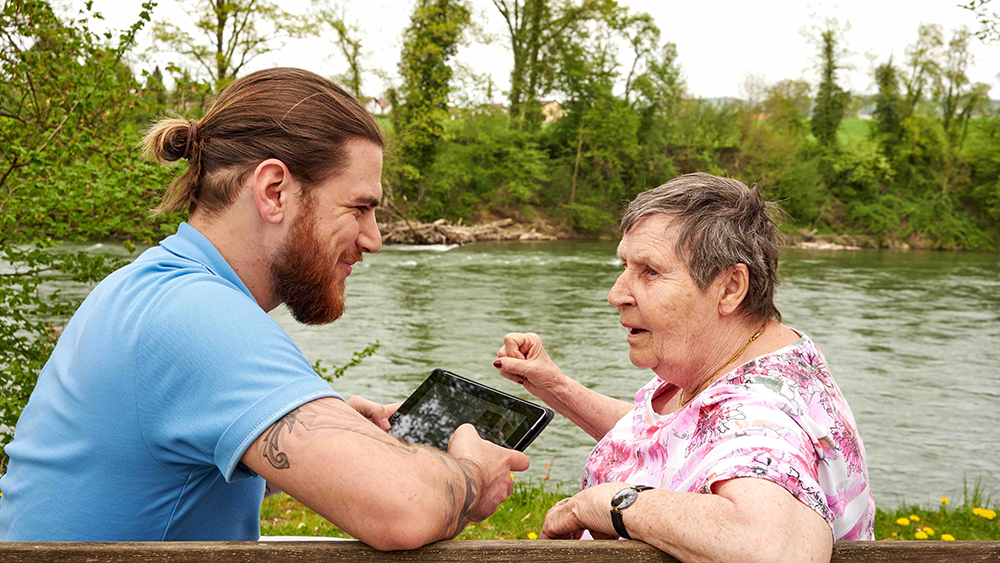 Memories form a large part of who we are. Sounds and music that are linked to pleasant experiences can evoke positive associations and thus lift our mood – especially for people with memory problems. These are the findings of a study by the Center for Gerontology and the University Research Priority Program “Dynamics of Healthy Aging” at the University of Zurich. Together with various clinical institutions, they investigated the potential benefits for dementia patients of an intervention using aural stimuli based on people’s personal biographies. “Listening to individually tailored sounds or music that are meaningful to them can evoke positive feelings in people with dementia,” says study leader Sandra Oppikofer. “The sounds help them connect with the people around them, take an interest in their surroundings, and enjoy positive experiences once more.”

Memories of a goalie

The starting point of the study was the method known as “Music Mirror”, developed by British music educator Heather Edwards. To create a Music Mirror, dementia patients record positive memories in their own words, which are combined with sounds or music that they link with the corresponding episode from their life. As an example, Oppikofer cites a man who remembered that he had met his wife on the football pitch when he was a goalie for FC Wettingen. “He linked this biographical episode with the song about a goalkeeper, ‘Er steht im Tor’ by Wencke Myhre.”

The “Music Mirrors” – recorded biographical recollections embedded in acoustic tracks – were then played by the nursing staff or carers over a period of six weeks during tricky everyday situations. Such situations might be when a new carer was starting a night shift and wanted to build up a trusting relationship with the patient, or if a patient was refusing to have their dressing changed. The staff recorded the context and their observations in a diary. The research team used these records to analyze how the use of the Music Mirrors affected the mood and behavior of the patients with dementia. The effects on the workload of the carers and on the closeness between caregivers and patients were also considered.

The results show that the Music Mirror method can considerably increase the well-being of people with dementia, both in everyday situations and in terms of challenging behavior such as agitation, apathy or aggression. In addition, the researchers identified positive medium-term effects: For example, depressive moods and abnormal movement patterns – including restlessness or repeated opening of drawers – decreased during the intervention.

Stronger bond between patients and caregivers

But it was not only the patients who benefited. The overall mood of the carers and nursing staff also improved, and acute feelings of stress decreased. In addition, the perceived closeness between the caregivers and their patients with dementia increased. “One nurse found that a patient’s Music Mirror suddenly reminded her of the musical style of her own deceased parents, which triggered a lot of emotions in her and created a new bond between her and the patient,” says Oppikofer. “This demonstrates how the use of Music Mirrors can foster positive relationships and significantly improve daily caregiving on an emotional level.”

How can memories and life events be expressed through sounds and music? Eight students from the music department of Lucerne University of Applied Sciences and Arts under the direction of Dr. Magda Mayas, a specialist in improvisation, created sound collages from Music Mirrors. They worked with several Music Mirrors which they used as inspiration and a starting point for the collages.