(jpg, 1.36 MB) Stem cells in the mouse hippocampus (in blue): With increasing age, their ability to form new neurons decreases as the amount of the nuclear protein lamin B1 (in red) drops. (Image: Khadeesh bin Imtiaz, UZH) 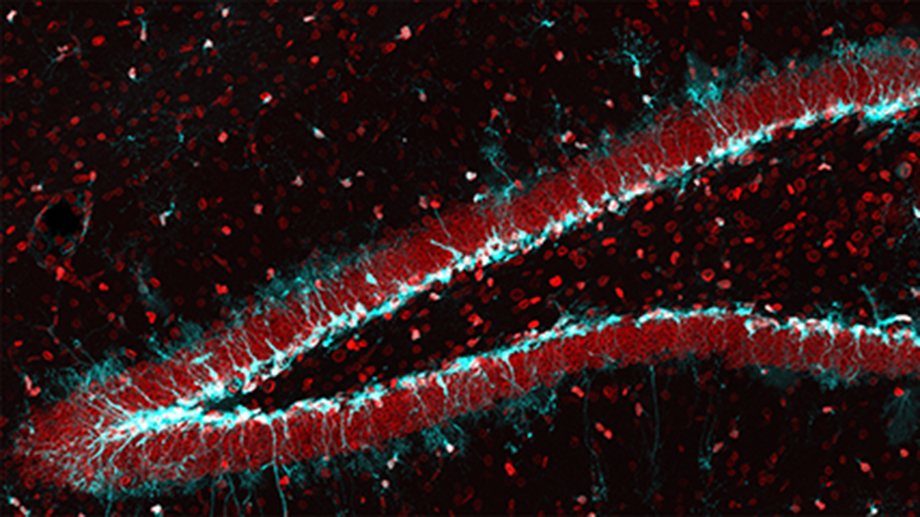 Neural stem cells
Stem cells in the mouse hippocampus (in blue): With increasing age, their ability to form new neurons decreases as the amount of the nuclear protein lamin B1 (in red) drops. (Image: Khadeesh bin Imtiaz, UZH)

The stem cells in our brain generate new neurons throughout life, for example in the hippocampus. This region of the brain plays a key role for a range of memory processes. With increasing age, and in patients suffering from Alzheimer’s disease, the hippocampus’ ability to create new neurons declines steadily – and with it, its memory functions.

A study conducted by the research group of Sebastian Jessberger, a professor at the Brain Research Institute of the University of Zurich, shows how the formation of new neurons is impaired with advancing age. Protein structures in the nuclei of neural stem cells make sure that harmful proteins accumulating over time are unevenly distributed onto the two daughter cells during cell division. This seems to be an important part of the cells’ ability to proliferate over a long time in order to maintain the supply of neurons. With advancing age, however, the amounts of nucleic proteins change, resulting in defective distribution of harmful proteins between the two daughter cells. This results in a decrease in the numbers of newly generated neurons in the brains of older mice.

The central element in this process is a nuclear protein called lamin B1, the levels of which decrease as people age. When the researchers increased lamin B1 levels in experiments in aging mice, stem cell division improved and the number of new neurons grew. “As we get older, stem cells throughout the body gradually lose their ability to proliferate. Using genetic engineering and cutting-edge microscope technology, we were able to identify a mechanism that is associated with this process,” says doctoral candidate and first author Khadeesh bin Imtiaz.

The research is part of several ongoing projects aiming to reactivate aging stem cells. The ability to regenerate damaged tissue generally declines with age, thus affecting almost all types of stem cells in the body. “While our study was limited to brain stem cells, similar mechanisms are likely to play a key role when it comes to the aging process of other stem cells,” says Sebastian Jessberger.

These latest findings are an important step towards exploring age-dependent changes in the behavior of stem cells. “We now know that we can reactivate aging stem cells in the brain. Our hope is that these findings will one day help increase levels of neurogenesis, for example in older people or those suffering from degenerative diseases such as Alzheimer’s. Even if this may still be many years in the future,” says Jessberger.

The research was funded by the European Research Council, the Swiss National Science Foundation, the Helmut Horten Foundation, the Wisconsin Partnership Program, an NIH New Innovator Award and the Neuroscience Center Zurich.