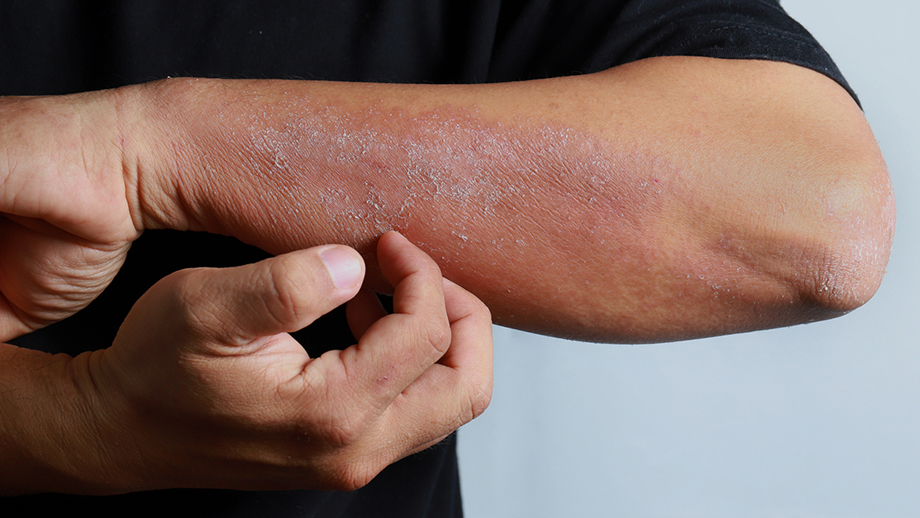 Patient with psoriasis
UZH researchers have discovered why drugs used to treat patients with psoriasis are not very effective. (Image: iStock.com/tylim)

Psoriasis is a chronic inflammatory autoimmune disease that manifests as red, scaly skin patches. There is no causal treatment for the disease, but the symptoms can be significantly alleviated with modern therapies. Complex changes in the networks of immune cells and the messengers they use to communicate with each other are responsible for the development of the skin disease. Clinical trials revealed that newly developed drugs blocking only the messenger interleukin-23 are more effective than previous treatments targeting both interleukin-23 and interleukin-12 in psoriasis patients. The responsible mechanism has so far remained unknown. Now, researchers at the University of Zurich (UZH) have uncovered the underlying molecular mechanisms.

Role of interleukin-12 in psoriasis decoded

The research teams of immunology professor Burkhard Becher and group leader Sarah Mundt from the Institute of Experimental Immunology at UZH have systematically investigated the function of interleukin-12 in psoriasis. They show that the messenger does not contribute to the disease – on the contrary, it protects against it. "These results surprised us, because so far drugs for the treatment of psoriasis also aim at blocking interleukin-12," says Becher.

Detailed studies in mice and with human tissue now show that various cell types in the skin are also equipped with receptors for interleukin-12. Not only the T cells of the immune system, but also keratinocytes, horn-forming skin cells that build up the epidermis, can thus recognize the messenger. In fact, the recognition of interleukin-12 by these skin cells was responsible for the protective effect of the messenger, as the researchers found out. "Interleukin-12 is essential for the normal, physiological function of keratinocytes. For example, it prevents the increased cell division observed in psoriasis," explains Mundt.

The UZH researchers' findings could be important for the treatment of other diseases. "The combined blocking of interleukin-23 and -12 is also used in the treatment of chronic inflammatory bowel diseases and psoriatic arthritis," says Burkhard Becher. "In these diseases, the role of interleukin-12 has not yet been sufficiently studied. But here, too, a protective role of the messenger substance is possible."