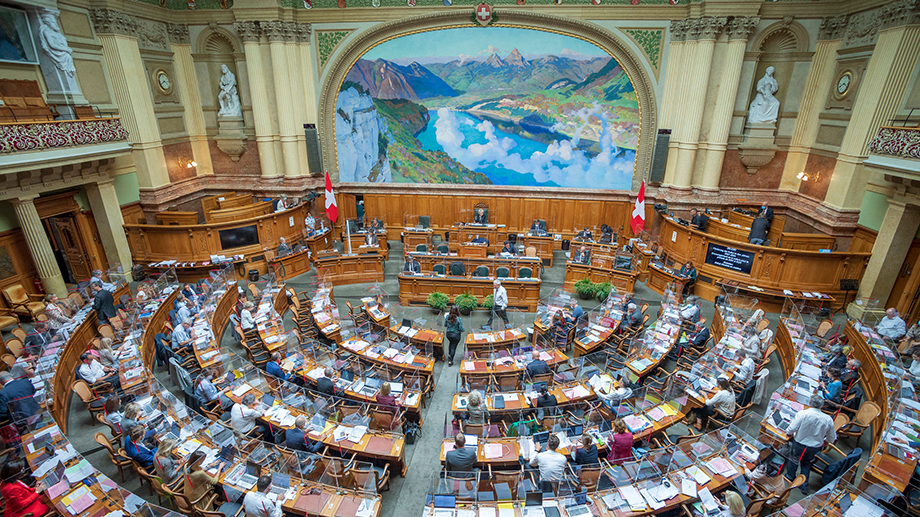 A survey carried out by researchers at the Department of Political Science of the University of Zurich (UZH) draws a varied picture regarding the Swiss population’s attitude towards government regulation. Following a first survey in 2016, the second study was conducted over the phone and online among 2,350 Swiss citizens in German- and French-speaking Switzerland in March/April 2020.

Importance of health protection has surged

Government regulation to protect the environment, consumers and healthcare has near universal approval among Swiss voters. Compared to the 2016 survey, the importance of health protection in particular has grown substantially. “Health concerns brought about by the coronavirus pandemic have elevated health protection to a priority government responsibility – well ahead of other regulatory goals,” says UZH professor Thomas Widmer, who led the study. The importance of other regulatory goals – including environmental protection, which was also deemed important – remained more or less the same.

As in the previous survey, a strong relative majority of voters (49%) approve of the regulatory practices of Swiss authorities. However, the share of voters in favor of increased regulation has doubled (from 10% to 20%) over the past four years, while the share of regulatory critics decreased significantly (42% to 31%). The call for tighter regulation has increased considerably compared to 2016 especially among people close to left-wing parties such as the Social Democratic Party and the Green Party. In the political center, approval rates for regulatory practices have increased significantly.

Not in my backyard

The need for regulation is deemed highest in the financial industry. Around half of the survey respondents believe that government regulation should be increased in this sector. In addition, 44 percent of Swiss voters think online trade should also be regulated more strictly. “In general, calls for decreased regulation are loudest in the respondents’ respective fields. On the flip side, respondents were more likely to be in favor of tighter regulation in sectors that don’t concern their own line of work,” says Widmer. In spite of this, 56 percent of the employed population consider regulations in their own line of work to be “fairly effective”, with 16 percent even deeming them “very effective”. In contrast, over a quarter of respondents think regulation in their field is not very (23%) or not at all effective (5%).

Swiss voters want to have their cake and eat it too

When presented with arguments for and against regulation, respondents had conflicting views. The ideal of many Swiss voters includes having stricter rules for businesses but also eliminating cumbersome bureaucracy. “This incompatibility could possibly be resolved through ‘smart regulation’, which would involve highly targeted government interventions with lower follow-up costs,” the political scientist says. Confronted with the possible costs of regulation, respondents’ views didn’t change much, or not at all. Approval for a ban on oil-fired heating, for example, remained roughly the same, regardless of whether it would increase housing costs by five or even ten percent.

Majority agrees with extent and timing of Covid measures

The coronavirus crisis created an extraordinary situation, which also saw unusually drastic measures to protect the health of the population. A majority of respondents considered these measures appropriate in the spring of 2020 and stated that the government and cantons had acted in good time. A strong minority of around one-third of all voters – notably in the French-speaking part of Switzerland, which was initially more strongly affected – wished that the government had intervened sooner. “Criticism of coronavirus measures ultimately also depends on people’s general attitude towards the role of government in economic matters. It’s not exclusively a coronavirus-specific stance,” says Widmer.