Department of Molecular and Cellular Biology 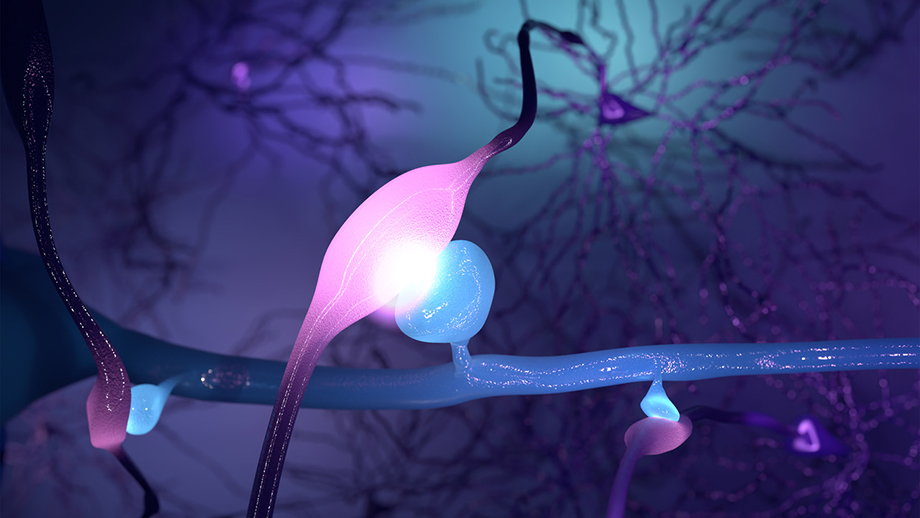 Synapses
The size of synapses directly determines the strength of their signal transmission – illustrated as three nerve cell connections of different size and brightness. (Image: Kristian Herrera and authors)

The neocortex is the part of the brain that humans use to process sensory impressions, store memories, give instructions to the muscles, and plan for the future. These computational processes are possible because each nerve cell is a highly complex miniature computer that communicates with around 10,000 other neurons. This communication happens via special connections called synapses.

The bigger the synapse, the stronger its signal

Researchers in Kevan Martin’s laboratory at the Institute of Neuroinformatics at the University of Zurich (UZH) and ETH Zurich have now shown for the first time that the size of synapses determines the strength of their information transmission. “Larger synapses lead to stronger electrical impulses. Finding this relationship closes a key knowledge gap in neuroscience” explains Martin. “The finding is also critical for advancing our understanding of how information flows through our brain’s circuits, and therefore how the brain operates.”

Reconstructing the connections between nerve cells of the neocortex

First, the neuroscientists set about measuring the strength of the synaptic currents between two connected nerve cells. To do this, they prepared thin sections of a mouse brain and, under a microscope, inserted glass microelectrodes into two neighboring nerve cells of the neocortex. This enabled the researchers to artificially activate one of the nerve cells and at the same time measure the strength of the resulting synaptic impulse in the other cell. They also injected a dye into the two neurons to reconstruct their branched-out cellular processes in three dimensions under a light microscope.

Since synapses are so tiny, the scientists used the high resolution of an electron microscope to be able to reliably identify and precisely measure the neuronal contact points. First, in their light microscope reconstructions, they marked all points of contact between the cell processes of the activated neuron that forwarded the signal and the cell processes of the neuron that received the synaptic impulse. Then, they identified all synapses between the two nerve cells under the electron microscope. They correlated the size of these synapses with the synaptic impulses they had measured previously. “We discovered that the strength of the synaptic impulse correlates directly with the size and form of the synapse,” says lead author Gregor Schuhknecht, formerly a PhD student in Kevan Martin’s team.

Gaining a deeper understanding of the brain’s wiring diagrams

This correlation can now be used to estimate the strength of information transmission on the basis of the measured size of the synapse. “This could allow scientists to use electron microscopy to precisely map the wiring diagrams of the neocortex and then simulate and interpret the flow of information in these wiring diagrams in the computer,” explains Schuhknecht. Such studies will enable a better understanding of how the brain functions under normal circumstances and how “wiring defects” can lead to neurodevelopmental disorders.

The team was also able to resolve another longstanding puzzle in neuroscience. Until now, the conventional doctrine had been that only a single neurotransmitter-filled packet (a so-called vesicle) is released at a synapse upon activation. The researchers were able to use a novel mathematical analysis to prove that each synapse in fact has several sites that can release packets of neurotransmitter simultaneously. “This means that synapses are much more complex and can regulate their signal strength more dynamically than previously thought. The computational power and storage capacity of the entire neocortex therefore seems to be much greater than was previously believed”, says Kevan Martin.