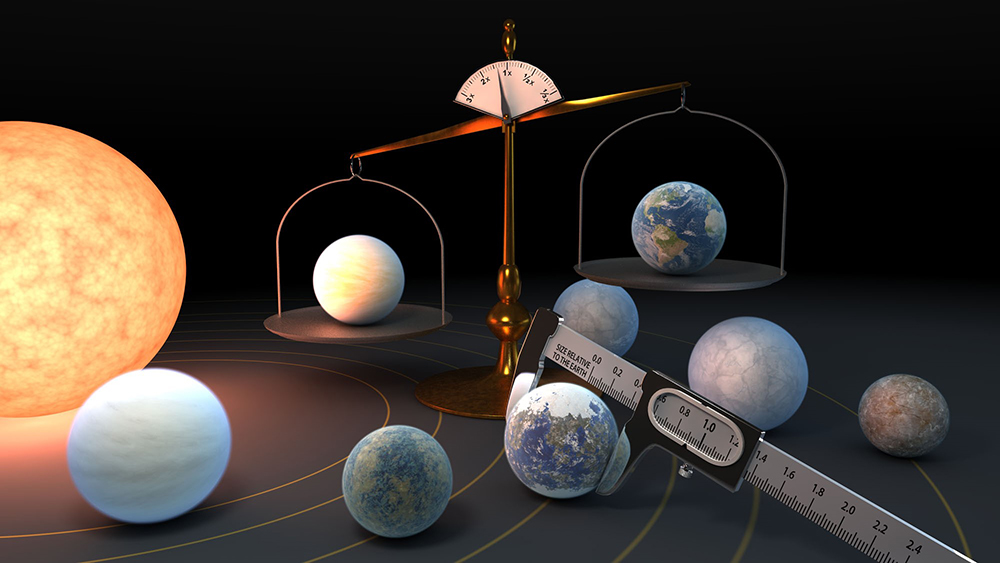 The planets of TRAPPIST-1 are roughly the size and mass of Earth and thus must also be rocky, or terrestrial.

Discovered in 2016 some 40 light-years away, the seven exoplanets orbiting the star Trappist-1 offer a glimpse at the tremendous variety of planetary systems that likely fill the universe. As reported by NASA's Jet Propulsion Laboratory JPL in a media release today, a new study which is published in the Planetary Science Journal shows that the planets have remarkably similar densities. Also involved in the study are researchers from the Universities of Bern, Geneva and Zurich, who are all members of the National Center of Competence in Research NCCR PlanetS.

An ideal system for observations

In 2018, researchers led by Simon Grimm of the University of Bern, who is also involved in the current study, provided the most accurate calculation to date of the masses of the seven planets orbiting the star TRAPPIST-1. These calculations determined that the planets are roughly the size and mass of Earth and thus must also be rocky, or terrestrial – as opposed to gas-dominated, like Jupiter and Saturn.

Since the initial detection in 2016 of the TRAPPIST-1 worlds, scientists have studied the planetary family with multiple space- and ground-based telescopes. Managed by NASA's JPL in Southern California, the Spitzer Space Telescope for instance provided over 1,000 hours of targeted observations of the system before being decommissioned in January 2020. "The new observations allowed us to use transit data from a much longer time span than was available to us for the 2018 calculations. With the new data, we were able to refine the mass and density determinations of all seven planets, and it turned out that the derived densities of the planets are even more similar than we had previously expected," says Simon Grimm. This result also shows how important it is to observe such exoplanetary systems over several years, he adds.

"The TRAPPIST-1 system is fascinating because around this one star we can learn about the diversity of rocky planets within a single system. And we can actually learn more about an individual planet by studying its neighbors as well, so this system is perfect for that", says Caroline Dorn, an astrophysicist at the University of Zurich and a co-author of the paper. In our own solar system, the densities of the eight planets vary widely. The puffy, gas-dominated giants – Jupiter, Saturn, Uranus and Neptune -- are larger, but much less dense than the four terrestrial worlds, Earth, Venus, Mars, and Mercury. The seven TRAPPIST-1 planets, on the other hand, all share a similar density, which makes the system quite different from our own.

That the TRAPPIST-1 planets share a similar density could mean they all contain about the same ratio of materials thought to compose most rocky planets, like iron, oxygen, magnesium, and silicon. Since they are about 8% less dense than our home planet, the recipe for the TRAPPIST-1 planets must be notably different than Earth's. Based on that conclusion, the paper authors hypothesized what mixture of bulk ingredients could give the TRAPPIST-1 planets this specific density.

Water and iron as possible explanations

Among other things, the researchers investigated whether the surface of the planets could be covered with water, which would change the overall density. "By combining the planetary interior models from the Universities of Bern and Zürich with the planetary atmosphere models we are developing at the University of Geneva, we were able to evaluate the water content of the seven TRAPPIST-1 planets with a precision literally unprecedented for this category of planets,” explains Martin Turbet, an astrophysicist at the University of Geneva and co-author of the study. If the lower density could be explained by the presence of water, water would have to account for about 5% of the total mass of the outer four planets. By comparison, water makes up less than 0.1% of Earth's total mass. "However, our internal and atmospheric structure models show that the three inner planets of the TRAPPIST-1 system are likely to be waterless, and that the four outer planets have no more than a few percent water, possibly in liquid form, on their surfaces,” says Martin Turbet.

What is more, Eric Agol, an astrophysicist at the University of Washington and lead author of the new study, adds that all the planets are likely to have fairly low water content (probably less than a few percent) because it would otherwise be a coincidence for all seven planets to have just enough water present to have such similar densities.

Another way to explain the lower density is that the TRAPPIST-1 planets have a similar composition to Earth, but with a lower percentage of iron – about 21% compared to Earth's 32%, according to the study. Alternatively, the iron in the TRAPPIST-1 planets might be infused with high levels of oxygen, forming iron oxide, or rust. The additional oxygen would decrease the planets' densities. The surface of Mars gets its red tint from iron oxide, but like its three terrestrial siblings, it has a core composed of non-oxidized iron. By contrast, if the lower density of the TRAPPIST-1 planets were caused entirely by oxidized iron, then the planets would have to be rusty throughout and could not have iron cores.

"The night sky is full of planets, and it's only been within the last 30 years that we've been able to start unraveling their mysteries, also for determining the habitability of these planets," concludes Caroline Dorn.

The first two confirmed planets in the TRAPPIST-1 system were identified in 2016 by the Transiting Planets and Planetesimals Small Telescope (TRAPPIST) in Chile. Subsequent observations by Spitzer and ground-based telescopes showed that the system has seven planets.
All seven exoplanets were found via the transit method: Scientists can't see the planets directly (they're too small and faint), so they look for dips in the star's brightness created when the planets cross in front of it.