(jpg, 5.92 MB) Launch of the re-supply mission Space X CRS-20 from Cape Canaveral, USA on March 6, 2020: The first UZH-Airbus experiment "Organoids in Space" is transported to the ISS. (Image: NASA) 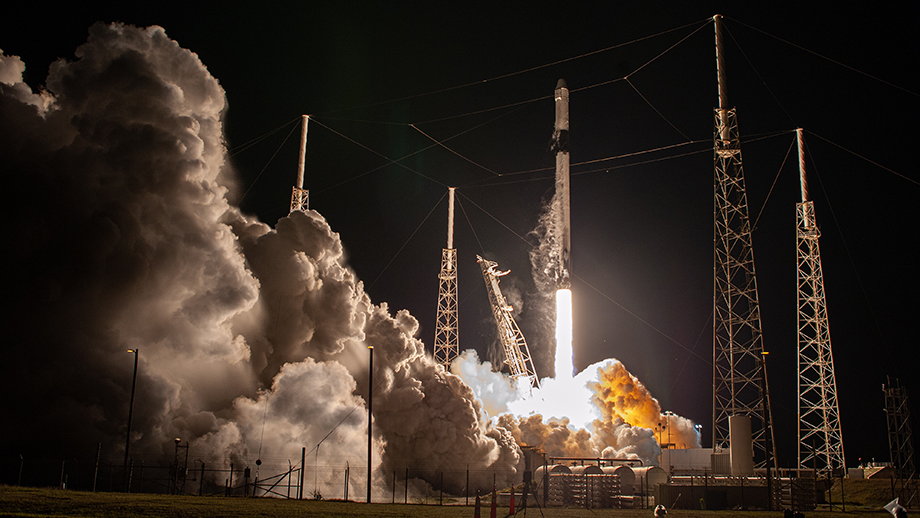 Launch
Launch of the re-supply mission Space X CRS-20 from Cape Canaveral, USA on March 6, 2020: The first UZH-Airbus experiment "Organoids in Space" is transported to the ISS. (Image: NASA)

The process for the joint 3D Organoids in Space project originated from the University of Zurich (UZH) researchers Oliver Ullrich and Cora Thiel. Together with Airbus, the two pioneers in research on how gravity affects and regulates human cells have developed the process to project maturity. The Airbus Innovations team led by project manager Julian Raatschen has developed the hardware and is providing access to the International Space Station (ISS). It took the project partners only three years from idea to the first production test in space. During this time, they completed various test phases and overcame highly competitive internal selection processes. "We have shown that the path to producing human tissue in space is feasible, not only in theory, but in practice," says Oliver Ullrich.

Oliver Ullrich, professor of anatomy at UZH, biologist Cora Thiel and Airbus are using microgravity in space to grow three-dimensional organ-like tissues – called organoids – from adult human stem cells. "On Earth, three-dimensional organoids are impossible to produce without support and matrix structures due to Earth’s gravity," Thiel explains. Such 3D organoids are attracting great interest from the pharmaceutical industry: They would enable toxicological studies to be carried out directly on human tissues without detouring via animal models. Organoids grown from patient stem cells could also be used as building blocks for tissue replacement to treat damaged organs. The number of donated organs today is far below the worldwide demand for thousands of donor organs.

The March 2020 ISS mission – in which 250 test tubes spent a month on the ISS – was highly successful. During their month-long stay under microgravity conditions 400 kilometers above ground, adult stem cells developed into differentiated organ-like structures such as liver, bones and cartilage. In contrast, the control samples grown on Earth under normal gravity conditions showed no or only minimal cell differentiation.

In the current mission, tissue stem cells from two women and two men of different ages will be sent into orbit. In doing so, the researchers are testing how robust their method is when using cells of different biological variability. They expect the production in microgravity to be easier and more reliable than using auxiliary materials on Earth. Currently, the focus is on production issues and quality control. “In view of future commercialization, we now need to find out how long and in what quality we can keep the organoids in culture after their return to Earth," says Oliver Ullrich.

"If successful, the technology can be developed and brought to operational maturity. Airbus and the UZH Space Hub can thus make a further contribution to improving the quality of life on Earth through space-based solutions," says Airbus project manager Raatschen. The sample material will return to Earth in early October. First results are expected from November.

The joint project started in 2018, when the teams of the UZH Space Hub and Airbus Defence and Space GmbH submitted their proposal in an Airbus-internal innovation and idea competition to get basic funding and start initial research. The project successfully prevailed against roughly 500 other ideas.

The UZH Space Hub is a strategic part of the Innovation Hub of the University of Zurich (UZH) and the National Innovation Park Zurich at the Dübendorf airfield. The UZH Space Hub connects groundbreaking research from the fields of astrophysics, earth observation and space life sciences with applied, commercializable science and with the industry. Founded in 1833, the University of Zurich is the largest university in Switzerland and one of the world's leading universities in life sciences.

Airbus is a pioneer of sustainable aviation and space utilization for a safe and united world. The company is constantly innovating for efficient and technologically advanced solutions in aerospace, defense and connected services. Airbus offers modern and fuel-efficient commercial aircraft and related services. Airbus is also a European leader in defense and security and one of the world's largest space companies. In helicopters, Airbus provides the world's most efficient solutions and services for civil and military helicopters.