(jpg, 6.78 MB) Virtual reality (CAVE) at the laboratory of the University of Zurich. (Image: UZH)

(jpg, 4.93 MB) A student with the eye-tracker during the experiment. (Image: UZH)

(jpg, 1.35 MB) A person navigates around a space with a digital assistant. (Image: UZH)

Prof. Sara Irina Fabrikant explains how we navigate with a digital assistant under stress. 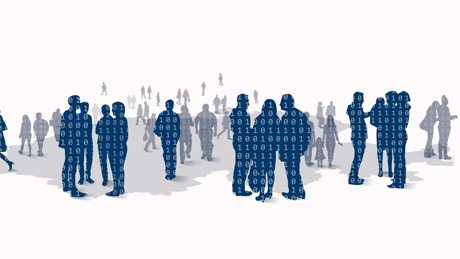 Fact Sheets of all projects of the Digital Society Initiative

The digitization of our society is all around us. (Image: UZH)

Buzzwords like Industry 4.0 or Big Data and the massive spread of digital technology, such as smartphones, apps or vehicles with state-of-the-art computers, all show one thing: Thanks to digitization, our society, our world of work and our free time are in the throes of a fundamental transformation. This process calls existing patterns of thought and behavior into question, enables novel forms of research and teaching in science, and demands new skills in a rapidly changing social reality.

International center for research and reflection

In order to accompany this digitization process with a critical eye and shape it in a forward-looking way, the University of Zurich has created the UZH Digital Society Initiative. “With the initiative, the university aims to become a hub for research and reflection on the digitization of society and science,” explains Michael Hengartner, Rector of the University of Zurich. “The initiative assumes a pioneering international role and, thanks to its interdisciplinary approach, should ideally encompass all of UZH’s faculties.”

The University of Zurich already conducts numerous research projects which examine the various different aspects of the digitization of society. “The UZH Digital Society Initiative will enable us to pool the research on digitization from the various disciplines and create synergies,” says Professor Abraham Bernstein from the Department of Informatics, who was instrumental in launching the initiative. At the Department of Geography, for instance, 3D simulations conducted at the interface between geography, IT and psychology are used to study how people under stress navigate around a space with a digital assistant. Or in the health sector, research is conducted into the legal and ethical parameters under which personal health data can be combined with impersonal information to facilitate an individual course of therapy. “Such an issue can only be tackled in an interdisciplinary way, even if, purely from a technical perspective, the solution is actually quite straightforward,” explains Bernstein. It is precisely this interdisciplinarity that enables UZH to showcase its strengths as Switzerland’s largest full-scale university.

Grand opening with President of the Federal Council

The UZH Digital Society Initiative will be opened on September 14, 2016 by President of the Federal Council Johann Schneider-Ammann, member of the governing council Silvia Steiner and other prominent speakers. One key component of the initiative will be the dialog with the public: The idea is to connect people and expertise from science, industry, politics and civil society and render articles on the assessment of the opportunities and risks of digitization publicly accessible. The UZH Digital Society Initiative will develop designs for the digital society of the future and discuss its findings with the interest groups.

During the approximately four-year launch phase, new research fields are also to be developed continually. For instance, a project on ethical and legal issues of cybersecurity is being launched in September within Horizon 2020. And UZH has also submitted various research projects under the Swiss National Science Foundation’s national research program “Big Data”.