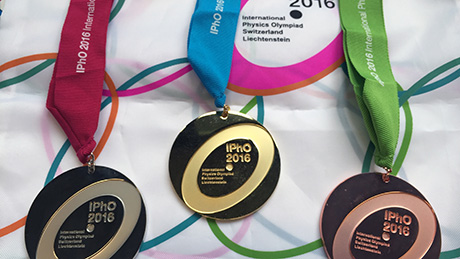 A grand ceremony in Zurich brought the IPhO 2016 to a close. (Image: UZH)

Although students and staff from all over the world are part of daily life at the University of Zurich’s Irchel Campus, the roughly 400 young people from a total of 86 countries – participating countries and two countries with observer status – who came to the 47th International Physics Olympiad lent the campus an international dimension never seen before. Today, the week-long IPhO 2016 came to a close with the highly anticipated final medal ceremony. At the festive event in the Zurich Tonhalle, a total of 219 Olympic champions were awarded a gold, silver, or bronze medal, while another 65 received an honorable mention. Various other special awards were also conferred – for best overall performance, for instance, or for the most creative solution in the experimental exam.

A team of UZH physicists under Thomas Uehlinger from Swiss Physics Olympiad formulated the questions for the demanding five-hour experimental and theory exams. And the students – with an average age of 18 – had to muster all their intellectual strength to solve the problems. The following participants achieved the best results and won Olympic gold:

“In the practical exam, the students had to conduct an experiment on two-dimensional electrical conductivity, and they were asked to study a model system on a theory of phase transitions. Then, in the theoretical part, there were complex questions on three topics: classical mechanics and gravitation, non-linear electrical circuits, and the Large Hadron Collider (LHC) at CERN,” is how Thomas Uehlinger, head of the academic committee, describes the test questions. As a past competitor at two IPhO, in 2002 and 2003, Uehlinger is well aware of exactly how difficult this year’s exams were: “But we didn’t just want to challenge these bright young minds. We wanted to inspire and motivate them, too.”

The University of Zurich looks back on a successful event

The large-scale event – for the first time ever in Switzerland and Liechtenstein – was organized by the University of Zurich and the Liechtenstein Office of Education, in cooperation with Swiss Physics Olympiad (SwissPhO) and the Association of Swiss Scientific Olympiads (ASSO). UZH President, Prof. Michael O. Hengartner, gives the event the highest marks: “I am very pleased and very proud that UZH hosted this international event so professionally and so successfully. It was a fantastic way for nearly 90 countries to get to know our University and its excellence.” The driving force behind the event’s success is the hard work and commitment of nearly 300 people: members of the Swiss Scientific Olympiads, staff and students at UZH, and many volunteers.

Adventure, fun, and friendship as integral parts of the IPhO

The roughly 400 young men and women from every corner of the globe also had an opportunity to expand their horizons beyond the intellectual challenges of physics. They could meet their peers from other cultures who speak other languages, and make friendships that will last a lifetime. And they also were able to get acquainted with Switzerland and Liechtenstein – indeed, for many, it was the first time they ever traveled to a different country. The midterm party of last Thursday was organized so that the competitors could relax after the demanding exams; rather than tackling complicated physics problems, they tested their abilities in milking cows and playing the Alphorn.

Now the daily routine of research and teaching is slowly returning to normal at Irchel Campus – while in Indonesia, preparations for the IPhO 2017 are already in full swing.