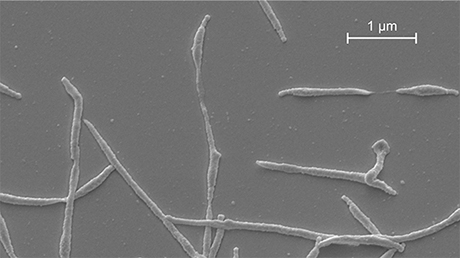 The bacterium Mycoplasma pneumoniae has been under suspicion for quite a while. Now, researchers at the University of Zurich, the University Children’s Hospital Zurich, and the Erasmus University in Rotterdam have proved without a doubt that it is the culprit. In fact, mycoplasma is not only responsible for respiratory tract infections such as pneumonia in children and adults, it can also trigger Guillain-Barré syndrome (GBS) in infected individuals. The scientists have succeeded for the first time in culturing mycoplasma from a GBS patient in a laboratory setting.

Antibodies attack not only the bacteria but also the nerve pathways

The reason for this is the similarity between structures on the surface of the bacteria and the body’s own nerve-sheath structures (molecular mimicry). This leads to an immune reaction, which attacks both the mycoplasma and the surrounding myelin sheath of nerve pathways. “Antibodies recognize a certain glycolipid structure present at the cell membrane of the bacteria. These antibodies cross-react with and bind to galactocerebroside (GalC), one of the most common components of human myelin”, explains Patrick Meyer Sauteur, the study’s first author. This fatty substance ensures electrical conductivity of the nerve fibers. If it is destroyed, the patient experiences GBS, characterized by paralysis in arms and legs, weakness, and sensory disturbances.

Antibody isotype class switch may be responsible for GBS

Interestingly, the anti-GalC antibodies were also found in patients without GBS who had recently been infected with mycoplasma. However, these were all of the antibody isotype M (immunoglobulin M, IgM), the earliest antibody type elicited during an acute immune response. By contrast, the anti-GalC antibodies in the GBS patients were of the isotype IgG. “We therefore assume that this class switch of the antibody isotype may contribute to the pathogenesis of GBS”, explains Meyer Sauteur. “In fact, this antibody isotype class switch is also assumed as a critical step in the development of other autoimmune diseases. Immunotherapies based on that premise may thus be a new possible treatment option for GBS.”

Since poliomyelitis is almost eradicated as a result of successful vaccination strategies, GBS has become the most frequent cause of acute paralysis in the western world. Affected individuals develop a general weakness, increasing paralysis in arms and legs, as well as sensory disturbances. GBS can be life-threatening if the breathing and swallowing muscles are also affected by the paralysis. Around one fifth of patients suffer permanent loss of function, while roughly five percent of cases end in death. GBS can occur at any age and affects one to two people per 100,000 every year.