Professor for Occupational and Organizational Psychology 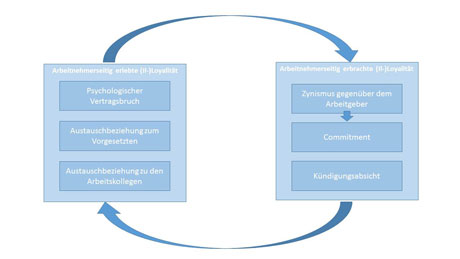 Employees who perceive their employers as loyal are more motivated to remain. (image UZH)

This year’s Swiss Human Relations Barometer focuses on the topic “loyalty and cynicism” – specifically, the tension between how employees experience and demonstrate both loyalty and cynicism, the latter being a negative, even derisive, attitude that employees develop toward their employers. "The results show that the situation is essentially a good one in regard to employee loyalty," says Prof. Bruno Staffelbach of the University of Zurich. 54 percent of employees feel emotional ties to their employer and only 16 percent are seriously considering resigning. Nonetheless, every fourth employee regards some promises made by the company they work for as having been broken and every third person is not fully satisfied with their relationship to their superior and with their co-workers. "As a result, 60 percent of employees manifest cynical behaviour toward their employer by, e.g., making deprecatory comments," according to Staffelbach.

Companies can take steps to combat the development of cynicism

"Companies can take steps to combat the development of cynicism and promote loyalty among their employees," Prof. Grote of ETH Zurich observes. Employees who perceive their employers as loyal are more motivated to remain and show less cynicism. Moreover, job security plays a major role.  Those who fear that they will soon lose their job are more likely to develop a cynical attitude or show corresponding behaviour and play with the idea of resigning from their job. However, according to Prof. Grote, a certain dose of cynicism can also help in addressing grievances and in maintaining a healthy distance from the company.

In addition, the Human Relations Barometer trend analysis shows that the discrepancy between work conditions and expectations, especially in regard to wages and the opportunity to develop, is growing. In order to better prepare employees for uncertain times, companies should promote the financial security and above all, the employability of those so affected. However, the necessary measures for systematic career planning, such as career assessments or mentoring have still not been taken by many companies.

Little initiative to take charge of one's own career

In regard to career orientation, the survey shows that employees only wish to take limited responsibility for their own careers. While most do not expect their company to plan and further their careers for them, they nonetheless want to stay at one company for a long time.  The necessity to deal with uncertainty and in some circumstances to even be able to use it to one's advantage, is something that is not recognized by a large and even growing number of employees. If companies want to change these circumstances, then they must choose fundamentally new approaches in human resource development.  Taking the initiative for one's own career can only be promoted by measures that focus on the career opportunities and needs of employees rather than those that primarily serve the interests of the company.

The Swiss Human Relations Barometer gathers data on how Swiss employees experience their work situation. For example, surveys have been conducted on the following themes: Mutual expectations and proposals of employees and employers as an aspect of the work relationships (psychological contract), practices in human resource management such as job design and personnel development, leadership, job satisfaction, employability and career orientation.  This survey is regularly put out and edited by Prof. Gudela Grote, Professor of Occupational and Organizational Psychology at ETH Zurich and Prof. Bruno Staffelbach, holder of the Chair for Human Resource Management at the University of Zurich.

The basis of the 2016 Human Relations Barometer was a survey of 1506 employees based on a random sample registry of the Swiss Federal Statistical Office (SFSO). The survey took place between March and June 2016 in the German, French and Italian-speaking parts of Switzerland.  The current edition focuses on the main discussion topic of loyalty and cynicism.

The 2016 Human Relations Barometer was made possible with the support of the Swiss National Science Foundation (SNSF).

Information about the Yearbook